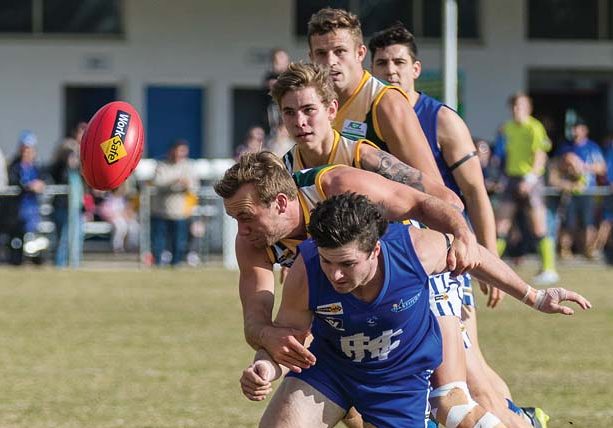 A SEVEN goal final quarter blitz from Tyabb has seen them secure their second win for the season, as they bested Devon Meadows and Bunguyan Reserve.

Tyabb were slow out of the gates, and found themselves with their backs to the wall as they fell behind by 15 points at quarter time.

They continued to slowly work their way into the game, and were only behind by a goal at the half time break. Devon Meadows continued to work hard but couldn’t stem the flow of goals, as Tyabb finally took the lead going into the three-quarter time break, with the margin only standing at a solitary point.

Despite looking set up for a close finish, the final quarter was uncompetitive, as Tyabb blew the game apart with a stunning run of seven unanswered goals.

Jake Anderson was the best on ground for the winning side, as he put away seven majors for Tyabb to take his tally for the season to 23.

Crib Point were also looking for their second win of the year on Saturday, as they hosted Pearcedale at Crib Point Recreation Reserve.

Pearcedale started things off on the right foot, holding their struggling Crib Point opponents scoreless in the first term.

Things went from bad to worse for lowly Crib Point, as they could only manage one goal to Pearcedale’s seven in the second term, with the lead blowing out to 49 points in half time.

Crib Point were able to restore some respectability with a good second half showing, but ultimately could do little to stop Pearcedale, as the final siren sounded with Pearcedale ahead 5.6 (36) to 13.9 (87)

Laughlin Cowell was best on ground with five goals for Pearcedale, with his teammate Ben Mitchell also contributing five goals in his first game for the year.

Elsewhere Chelsea battled hard to secure a win over Rye at RJ Rowley Reserve in a win that took them up to second place on the ladder.

Led by a four goal performance by Jack Francis, Chelsea were able to outmuscle their difficult opponents.

Chelsea entered the game as heavy favourites, but Rye showed they were not to be taken lightly, with Chelsea only holding an eight point advantage at the half time break.

In the final game of the split round, Hastings were able to claim a comfortable victory over Langwarrin at Thomas Barclay Oval.

Hastings got out of the blocks with pace, taking a three goal lead into the first break. Langwarrin were put on the back foot early, and struggled to ever work their way back into the contest.

Hastings’ star man Luke Hewitt contributed with his second consecutive four goal performance, while his goal kicking opponent at the other end of the ground was kept quiet. Normally dominant Langwarrin forward Jesse Murphy was limited to just one major for the game.