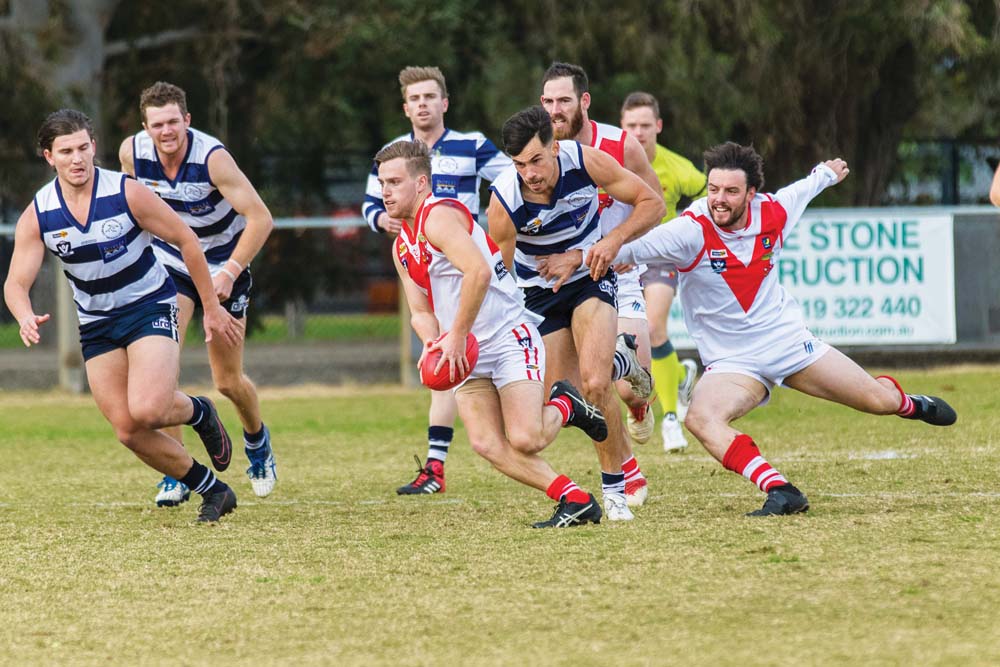 DROMANA bounced back to claim a win this Saturday to avenge their first loss for the year in MPNFL Division Two football last weekend.

After going down in a nailbiting six-point loss to Red Hill last Sunday, Dromana were faced with a more comfortable task in Crib Point at Dromana Recreation Reserve on Saturday.

On paper, this looked like a complete mismatch, as it pitted top of the ladder Dromana against a Crib Point side that had remained rooted to the bottom of the ladder since Round One.

Despite everything pointing to a comfortable Dromana win, Crib Point came flying out of the gates to start the match and even went into the half-time break with a shock six-point lead.

After the half-time break, Dromana recovered well from being rattled, and quickly regained the lead and kicked away.

Ben Holmes was the man who made his mark on the contest, kicking four goals in the second half and five in total to put the game beyond the reach of a brave Crib Point side.

Dromana tightened up their defence and held their lowly opponents to just three behinds in the second half, as they eventually ran out comfortable winners 13.19 (97) to 5.9 (39).

Elsewhere at Chelsea Reserve, it was a high profile battle of 2nd vs. 3rd place as Chelsea hosted Karingal at home.

With the winner set to claim second spot on the ladder, the stakes were high for this much-anticipated contest.

Karingal, who defeated Somerville by a comfortable margin last Sunday, started the game well by registering seven scoring shots to Chelsea’s three, but were so wasteful in front of goal that they actually went into quarter time down by a point, only registering two goals and five behinds for the first term.

The Bulls worked hard to wrestle their way back in front at the half-time break, but were still being wasteful in front of goal.

After the restart of play, Chelsea came out swinging and worked hard to hold Karingal goalless in the third term, taking a narrow seven-point lead into the last quarter.

In the final term, Karingal again had more shots on goal, but again they let their chances go to waste, and were made to pay for their poor form in front of goal.

Chelsea were just able to hold on to the narrow lead as the final siren sounded, running out victors and claiming the win 9.4 (58) to Karingal’s 7.13 (55).

Curtis Bywater was again among Chelsea’s best, registering four goals to take his tally to the year to an impressive 37 from 10 games. He is now placed second in the goalkicking race, two goals ahead of Hastings’ Luke Hewitt.

Hastings, who sit 4th on the ladder just two games adrift of top place, were highly fancied coming into the clash are certainly lived up to the expectations.

Luke Hewitt again contributed with another four-goal performance while his teammates Paul Rogasch and Grant Masterson also had big days in front of goal, kicking six and five goals respectively.

Red Hill continued their excellent run of form when they travelled to take on Somerville away from home.

Fresh off a thrilling one-goal win over the undefeated Dromana, Red Hill came into this clash full of confidence but were put on the back foot by a fast-starting Somerville who took a one-point lead into the first break.

From that point on, Red Hill were much the better side and dominated the second term with seven more scoring shots than their opponents. Despite creating more chances, they were wasteful in front of goal, kicking two goals and seven behinds and failing to really punish Somerville.

Play got back underway for the second half with Red Hill eight points ahead, and although Somerville fought hard to work their way back into the game, Red Hill’s quality proved too strong.

At Lloyd Park, Langwarrin hosted Tyabb in what would prove to be a comfortable game for the home side.

Their regular target Jesse Murphy was again in blistering form, as he booted six majors to take his tally for the year to 40, which puts him on top of the league’s goalkicking leaderboard.

In the final clash of the weekend, Devon Meadows took on Rye at Glover Reserve in a tense contest.

The see-sawing affair saw Rye hold a two-point lead at half-time, but their Devon Meadows opponents proved too strong for them in the second half.