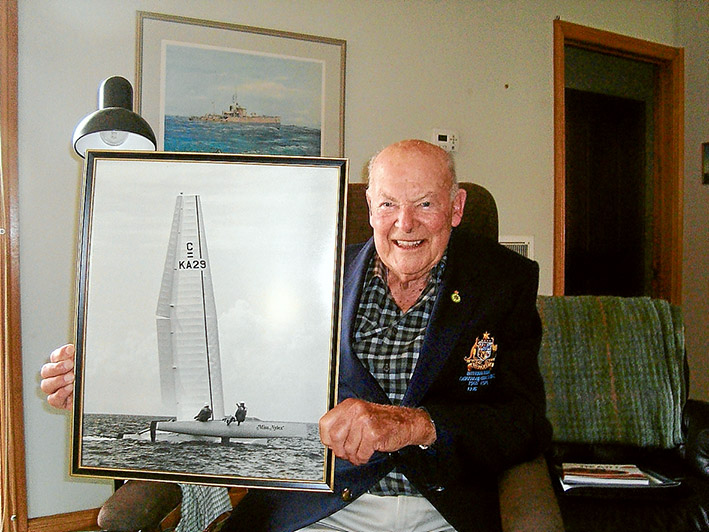 All abuzz: John Buzaglo of Mornington was awarded the Medal of the Order of Australia on 26 January for services to yachting. He is holding a photo of Miss Nylex, the “wingsail” catamaran that revolutionised international yacht racing including the modern America’s Cup. Picture supplied
Share
Facebook Twitter LinkedIn Pinterest Email JOHN “Buz” Buzaglo was perhaps destined to co-create a radical racing yacht in the 1970s because as a child in the 1930s he built his own glider and model boats and later a land yacht that he crashed on a busy road in Melbourne’s eastern suburbs.

Buzaglo, who has died at age 94, was co-founder of the syndicate that designed, built and raced the world’s first viable “wingsail” racing yacht – a C class catamaran that appeared to have a plane’s wing where the mast and sail should be.

Sponsored by Australian plastics manufacturer Nylex Corporation, the catamaran Miss Nylex was the fastest cat in Australia (arguably the world) in the early 1970s and successfully defended the Little America’s Cup in 1974 against New Zealand.

The wingsailed cat was devised by syndicate member and Melbourne yacht designer and automotive engineer Roy Martin, who worked for General Motors-Holden for 35 years.

Other syndicate members included prominent sailors Frank Strange, Bill Gash and Chris Wilson as well as Leon Ward and John Taylor. Last week, Wilson said one of Buzaglo’s great strengths was his ability to bring people together to work as a team. “And John saw the potential of Roy’s wingsail design well before others,” he said.

The catamaran was built in 1971 in the Melbourne bayside suburb of Parkdale by professional boat-builder Len Dobson and syndicate members. A second, more sophisticated Miss Nylex was built in 1975 at the Commonwealth Aircraft Corporation in Fishermans Bend.

Miss Nylex wasn’t the first yacht in the world with a wingsail, but it was the first one that worked properly and became the inspiration for racing yacht designers around the world, including America’s Cup designers.

John Buzaglo was born in Sassafras in the Dandenong Ranges east of Melbourne on 11 July 1924 to Fred and Ruth (nee Thomas) Buzaglo. Brothers Bruce and Noel followed in 1928 and 1932.

Sassafras was a paradise for youngsters, Buzaglo wrote in his 2017 autobiography A Wing and a Prayer. “We explored the forest, fished in creeks, made slingshots and spears in vain attempts to catch rabbits, built treehouses, and smuggled baby possums into the classroom inside our shirts,” he wrote.

When Buzaglo reached high school age he was sent to Camberwell Grammar and the family moved to nearby Surrey Hills in 1937 when a polio epidemic forced health authorities to close public places such as guest houses.

War was declared in September 1939. By this time he was at Taylors College in the city where he met lifelong mate John “Jock” Scrivenor, who taught Buzaglo to sail when he stayed with Jock’s family at Frankston.

Buzaglo convinced his parents to sign papers so he could join the Royal Australian Navy. It was June 1942, just a few weeks before his 18th birthday. He served on corvettes in the Indian and Pacific oceans and rose to the rank of sub-lieutenant.

He was discharged in March 1946 and found a job at a Melbourne plastics manufacturer that later became Nylex Corporation. Here he met the founder’s son Peter Derham who as managing director would sponsor Miss Nylex in 1971.

Later that year Buzaglo met his future wife, Kathleen Wood, and the couple married in September 1947. First-born Robyn arrived the following year and Lynne was born just before the family moved to a new home in Cheltenham in 1951. By this time he moved to Nylex’s Mentone factory.

Buzaglo saw his first catamaran in the 1950s at Blairgowrie and bought a cat kit from the “father” of catamaran design in Australia, Charlie Cunningham, who was based at Mordialloc with his son Lindsay.

Buzaglo joined the Cunningham team on its C class cat Quest in the 1960s and with Lindsay had success in the United States and nearly won the Little America’s Cup in the United Kingdom in 1965, capsizing when hit by a squall in sight of the finishing line.

The Cunninghams finally won the coveted cup in 1970 when they defeated Denmark. The next year Buzaglo and his sailing mates Frank Strange, first president of the Australian Catamaran Association, and Australian catamaran champion Chris Wilson founded a syndicate to take on Quest at trials to pick an Australian defender for the 1972 cup.

Miss Nylex defeated Quest but selectors were worried about the wingsail and chose Quest, which retained the cup by beating American cat Weathercock.

Miss Nylex won the right to defend the cup in 1974 and trounced New Zealand’s Miss Stars 4-0. Light winds ruined the 1976 defence off Sorrento and Miss Nylex was pipped 3-4 by a lighter boat, Aquarius from the US.

After the syndicate disbanded in late 1974, Buzaglo finished his 32-year career with Nylex, where he was advertising manager, and in 1978 he and Kath bought a property on Hunts Road, Bittern, built a lake and started Linden Lake Sailing School, teaching thousands of children in a safe and controlled environment.

The couple retired and moved to a townhouse in Mornington in 1995. In the late 1990s, Kath was diagnosed with mild dementia, which restricted and then ended their trips. She died in 2008, a year after their 60th wedding anniversary.

In the decade since, Buzaglo has maintained his keen interest in sailing. Between 2014 and 2017 he wrote his autobiography, which contained Miss Nylex and Little America’s Cup history.

On Australia Day 2016, Buzaglo was awarded the Medal of the Order of Australia (OAM) for “services to sailing as a yachtsman and [sailing] instructor”. Later that year he moved to the war veterans’ village RSL Park in Frankston South.

John Buzaglo suffered a stroke in July and died in the early hours of Saturday 4 August. He is survived by his daughters Robyn and Lynne and his grandchildren Briony, Emily, Jay, Simon and Katherine, and great-grandchildren Thomas, Charlotte, Jack, Mackenzie and Polly.