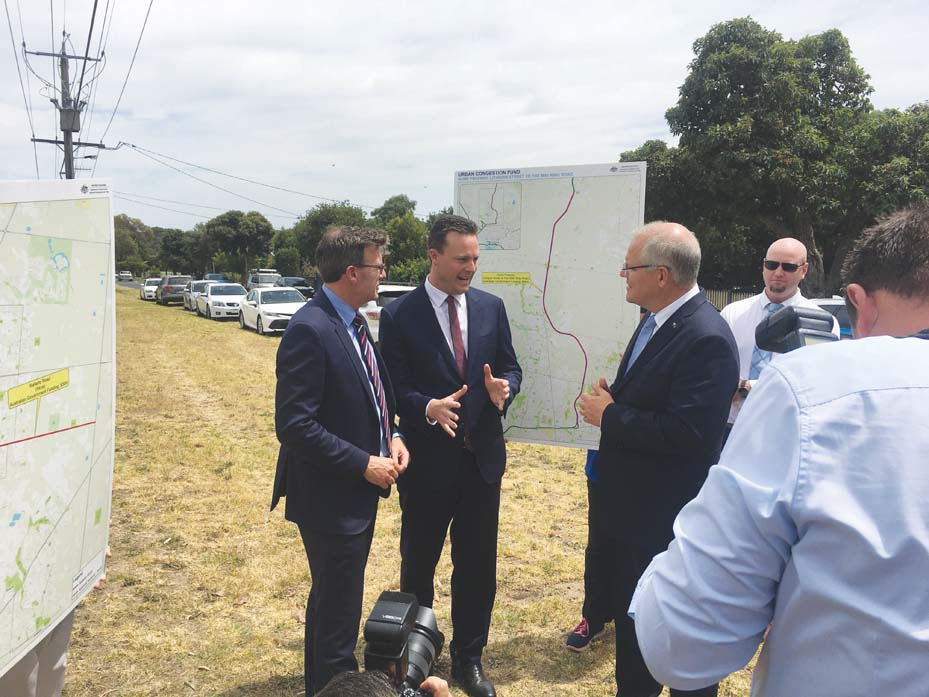 BALLARTO Road has been targeted by the federal government for $30 million “intersection upgrade” works.

The Prime Minister Scott Morrison visited the road on 5 February to announce that the funding would be included as part of the upcoming federal budget, to be released in April.

Exactly what those upgrades will be are not finalised, but Dunkley MP Chris Crewther said they would focus on “Greenwood Drive, Dion Drive, and Potts Road”.

“At a number of different intersections along this road, we are looking to upgrade them so people can get in and out of their residential streets easier. For example that may include lights, lanes so that people can merge with the traffic and not have to sit perpendicular to the intersection, and it may include other upgrades to reduce that congestion,” he said.

“So many residents of Carrum Downs, Skye and Sandhurst, along with Skye CFA, have told me how hard it is to get in and out of Ballarto Road to and from their residential streets. So I’ve been fighting for funding to resolve this major congestion issue,” Mr Crewther said.

He said one of the potential upgrades was to add “a buzzer so that the Potts Road CFA can control those lights and get out to fires when they need to help,” as they “have been finding it very difficult to get onto the road to fight fires.”

He said the $30 million budget for the project was determined through “consultation with council”.

Mr Crewther and Mr Morrison both said a state government contribution to the project would be “welcomed”, but Premier Daniel Andrews told media that he had only learned of the federal government’s announcement in the newspaper. Mr Morrison said he had not arranged a meeting with the Premier prior to making the announcement.

“We want Melburnians to get home sooner and safer with help from our Urban Congestion Fund,” Mr Morrison said.

“I want people to spend less time stuck in traffic jams and more time at home with their families and working in their businesses, that’s what matters. Chris Crewther has made it clear how much pressure congestion is putting on Bayside families and businesses given how quickly that area of Melbourne is growing. Help is on the way.”

Mr Crewther said “if the project is not contracted” in the month between the budget and the federal election, then there is a risk it may not proceed should Labor win the election. He said that the tender process for a project of this scale would “most likely take more than a month”.

However, Labor Dunkley candidate Peta Murphy said that “federal Labor can be trusted to work with the Andrews state government and actually consult with the community to use this $30 million to deliver the improvements to local roads infrastructure that are needed.”

As part of her state election campaign, Carrum MP Sonya Kilkenny pledged to spend $2.5 million at the intersection of Ballarto Road and Lyrebird Drive to install traffic lights.

Frankston mayor Michael O’Reilly said “when this road gets to rush hour, people are sitting in their cars at the intersections trying to get out constantly. Ballarto Road remains congested throughout the day even outside of peak hours, carrying over 12,000 vehicles each day.”

“Council has advocated to VicRoads on behalf of concerned residents for a number of years to have Ballarto Road upgraded and today we’re delighted to see the Federal Government is taking action,” he said.