Book details history of hall on the hill 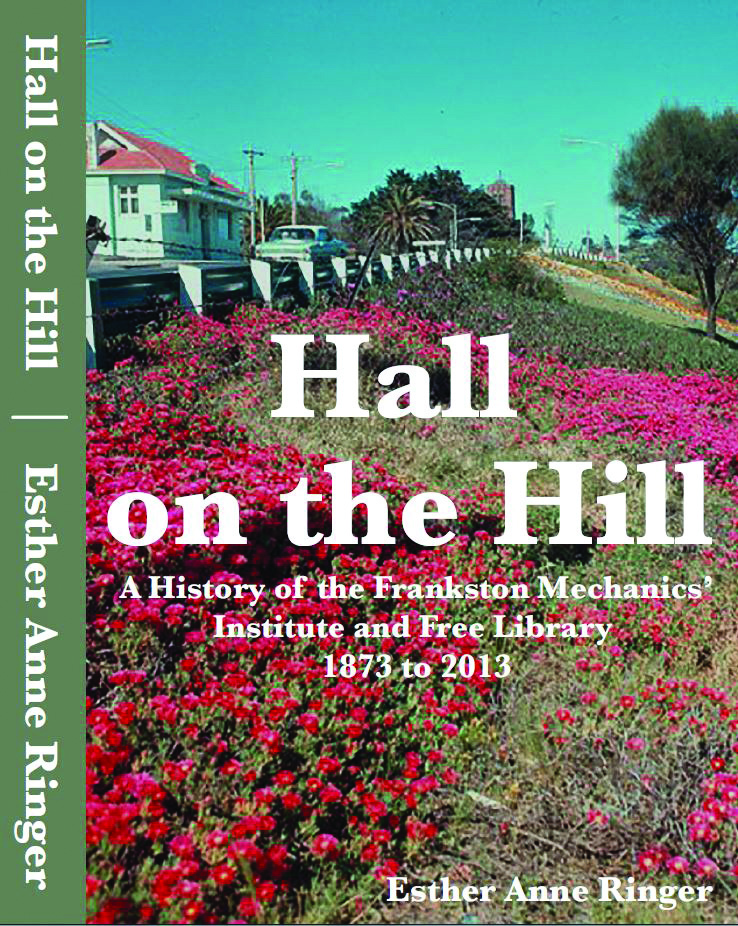 The book, of over three hundred pages, was compiled by Anne Ringer from government records including those of the Land and Health Departments, newspaper accounts and personal experiences of local residents.

Early Beginnings: The idea that a site for a Free Library in Frankston was first suggested in August 1873 and a site temporarily reserved from September 1873 until March 1880. The Free Library officially opened on May 2, 1880, by the Institute’s president Mark Young. In 1880, the Free Library had 200 books and opened for two hours on Monday, Wednesday and Friday culminating in 200 visits. Over the next two years a porch and cloak room were welcome additions to the building. By 1894 there were 1,035 books with 1,082 visits between 8.00 pm -10.00 pm on Mondays and Thursdays. The Hall reached its present length in 1906 with finances obtained from the local community and Government grants. A further grant of land was obtained to provide the 1915-16 extension which included an entrance hall, new committee room, free library and reading room. The Hall was the centre of cultural, recreational and civic activity, including meetings, lectures, plays, concerts church bazaars and balls. Soldiers from the Boer and World War 1 were farewelled and later welcomed home at the Hall.

1950s and Beyond: By 1955 the Hall was in need of repair but the Trustees of the Mechanics’ Institute were not able to fund such extensive renovations. The Trustees gave consent for the permanent reservation for a “Free Library” to be revoked and a new reservation of a “Public Hall and Public Library” under the control of the Shire of Frankston and Hastings. The 60 foot original brick side wall was re-placed, as well as a new roof and cladding both inside and out, together with other improvements. The major improvements were completed in 1956 – 57 with The Frankston and Hastings Shire Library opening on October, 1957, with 2349 borrowers and 6091 books. Due to the growing collection, the Library moved to larger premises. The move saw the cultural, recreational and civic tradition continue with, initially, the Toy Library and from November 1996 to March 2006, the club rooms and library of the Mornington Peninsula Family History Society, Inc. and other community groups, the last being the Sea Scouts.

After being de-commissioned the future of the building was under threat, but after lobbying by the Mechanics’ Institute of Victoria and local residents the council decided to re-open the building. The Hall on the Hill was completely renovated under the supervision of the Frankston Mechanics’ Steering Committee with grants from the Federal and State Government, as well as the City of Frankston. The official opening of Stages 1 and 2 of the Hall re-development was opened by the Hon. Alex Chernov, AO, QC, Governor of Victoria, on October 19, 2011. Stage 3 – the front rooms – was completed in January 2012.

This publication provides a reflection of the influence and legacy the Frankston Mechanics’ Institute and Free Library has had on the community of Frankston and surrounding areas for over 140 years.

A launch of the book will be held at the Frankston Mechanics’ Hall in Bay Street, Frankston on 16 March at 2pm. Anyone interested is welcome to attend. The book can be purchased at the launch or from the Mornington Peninsula Family History Society’s rooms at the Frankston South Recreation Centre, Towerhill Road, Frankston or by post to MPFHS, PO Box 4235, Frankston 3199 for $35 (Postage and packing add $15)