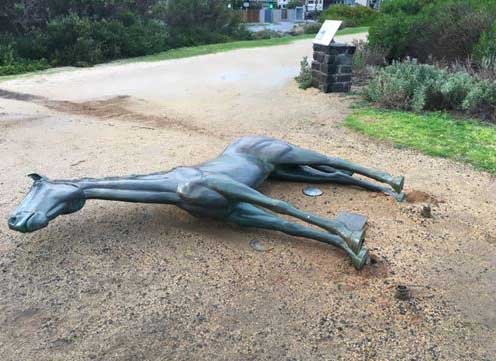 THE attempted theft of a horse statue from Parkdale is being investigated by police.

Police believe that offenders used a vehicle to try and steal the bronze horse from its Beach Road location at around 3.20am 29 June.

The offenders knocked the statue over and damaged it, but did not steal it.

Police believe that at least two offenders fled from the horse in a black four wheel drive ute.

A 29-year-old Mordialloc man was arrested in relation to the alleged incident, and was released pending further enquiries.

Witnesses are urged to contact Crime Stoppers on 1800 333 000 or submit a confidential crime report at www.crimestoppersvic.com.au