Pythons a game clear on top 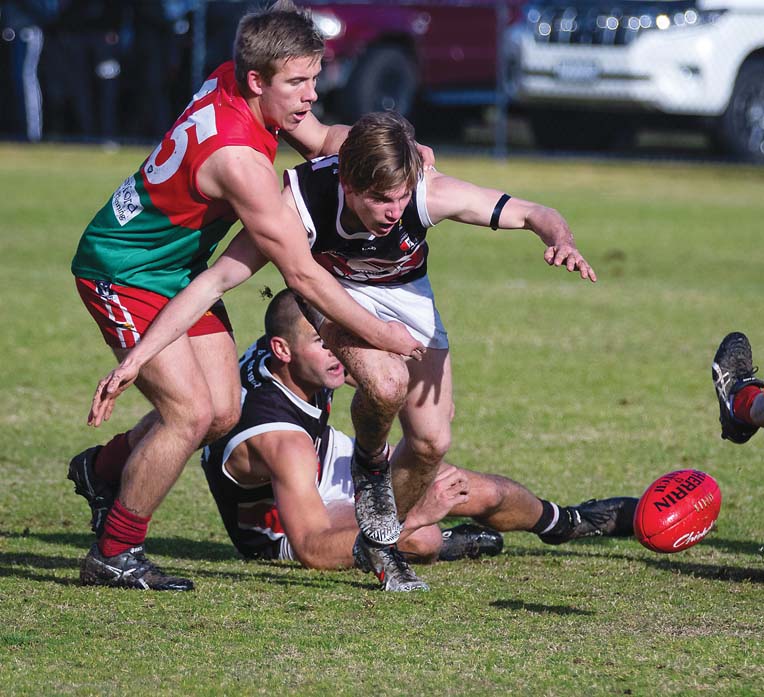 DROMANA have picked up an impressive win over Sorrento in front of their home crowd on Saturday.

Dromana have looked right at home in division one this season, but faced a tough test in Sorrento. Last year’s grand finalists came to Dromana Recreation Reserve looking to prove that they are a good chance of doing one better and winning the flag in 2019.

Dromana at home has proved to be a tough test for all sides who visit this year, but Sorrento looked well and truly comfortable in the first quarter. A stunning six goals to zero start saw the Sharks race out to an early 41 point lead.

Faced with a mountain of work, Dromana battled hard to claw their way back into the contest. They held Sorrento to just one behind in the second term, and closed the gap to two goals by the time the half time break rolled around.

Sorrento had another tough time in the third quarter, and again failed to register a goal. Dromana cut the lead back to nine points going into the final term, and were able to ride their wave of momentum with a big last quarter.

A five goals to one fourth quarter saw Dormana finally hit the lead, and put the Sharks away. Sorrento let a brilliant start slip, and will be disappointed to have not come away with the four points.

With Sorrento taking a loss, a win for Pines would put them a game clear on top of the ladder. The Pythons played host to Bonbeach at Eric Bell Reserve on Saturday.

Pines got off to a perfect start in front of their home crowd, starting brilliantly with a five goals to zero opening quarter. From there the Sharks struggled to bite back, and were playing catch up all afternoon.

The Pythons had an even spread of goal kickers on the day, with eight players getting on the scoreboard. Guy Hendry was named as their best.

At John Coburn Oval, Frankston YCW got the better of the Frankston Bombers in a scrappy affair.

Both sides traded blows in an even first quarter, before the Stonecats ran away to a three goal lead by half time

The Bombers clawed their way back in their third term, and trailed by just a point at three-quarter time. The Stonecats made the better of the difficult conditions in the last quarter though, and ran away with an 8.9 (57) to 6.5 (41) win.

Ryley Hodson kicked two goals and was named among YCW’s best. The win helps the inconsistent Stonecats get their year back on track. They currently sit in fifth place, equal on points with Rosebud and a game behind Bonbeach in fourth.

At Olympic Park, Rosebud struggled badly in tough conditions against Edithvale-Aspendale. They scored just one goal across the first three quarters of the match.

A better final quarter helped the Buds keep the scoreline respectable, but they could not do enough to make it close. The final score read Rosebud 3.5 (23) to Edithvale-Aspendale 6.5 (41).

At Alexandra Park, Mornington’s hopes of avoiding relegation were dealt a blow when they were defeated by Mt Eliza.

The Redlegs started well and had the Bulldogs on the backfoot early. They led by 5 goals at the halftime break and were in control.

Mornington scored just one goal in the first half, and were much better in the second. Although the Bulldogs improved, they could not do enough to close the gap.