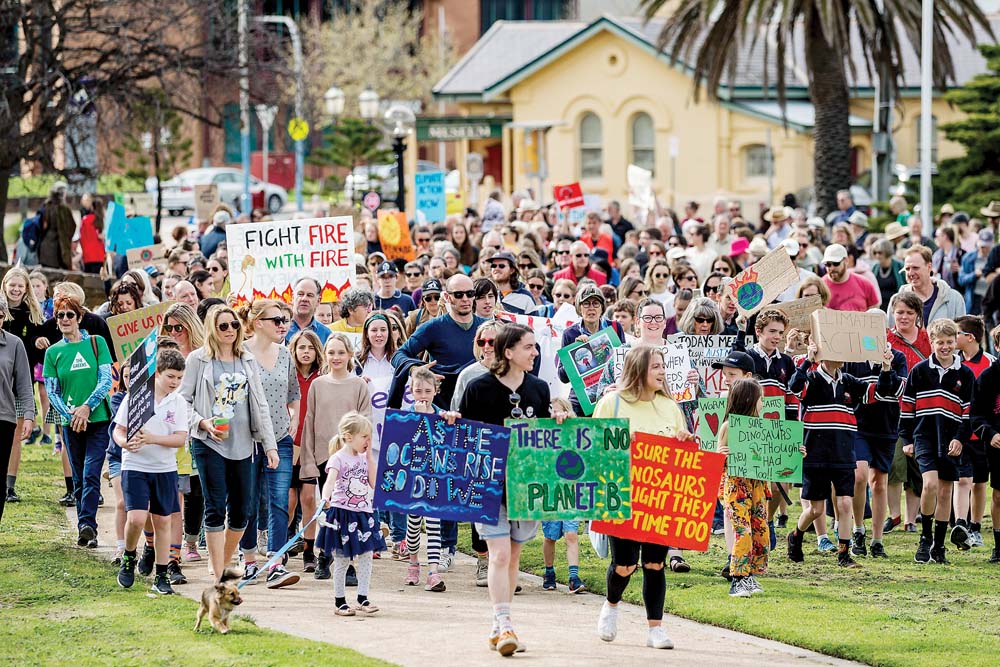 THE 500 students, parents and grandparents who rallied at Mornington Park on Friday to demand positive action on global warming got their message across in a constructive, well-behaved manner, Mornington police said.

Theres was one of more than 100 school strikes for climate occurring around Australia, Friday 20 September.

The rallies were organised by the student-run School Strike 4 Climate website. They followed strikes in March at which 150,000 people marched in Australia and 1.5 million took part worldwide.

The rally follows Mornington Peninsula Shire’s declaration of a climate emergency last month. This was confirmed by Cr Simon Brooks who spoke at the rally. The shire is working on ways to reduce greenhouse gas emissions and reduce the effects of climate change. (See “Peninsula’s climate emergency” The News 12/8/2019).

Several students addressed the crowd, including a nine-year old primary school boy, a year 12 girl and a Deakin University student. They spoke of their concerns for our rising sea level and a warming climate, and the impact this has on birds, fish and animals – and people.

The students are advocating for no new coal, oil or gas projects in Australia; 100 per cent renewable energy generation and exports by 2030, and funding for a transition and job creation plan for all fossil fuel workers and communities.

After the rally a long column weaved its way up Main Street to the office of Mornington MP David Morris. No one was there so the marchers turned around and walked back along the footpath to Mornington Park and dispersed.

“By taking time off school and work together around the world, we’ll show our politicians that people everywhere want climate justice and we’re not going away until we get it,” says the School Strike 4 Climate event description.

“We’ll strike in solidarity for everyone who’s already being hurt by the climate crisis and everyone who will be impacted if we don’t act now: workers, first nations’ peoples, young people, mining communities and more.”

The demonstrations were held three days before the United Nations Climate Action Summit in New York, which aims to bolster ambition and accelerate actions to implement the Paris Agreement on Climate Change.

Speaker Angus Boyd-Bell, 9, in grade 4 at Balnarring Primary School, said climate change was important because he had grown up spending time in the bush enjoying wildlife. “I have heard that over 200 species are gone each day because of climate change,” he said.

“Soon it could be zero and maybe that will become a reality if we don’t change what we are doing now.

“We want change now and we are going to get it.”

As part of her studies she had visited the Pacific island nation of Tuvalu, which hosted talks by government ministers to showcase the detriments of climate change. “This island will become the first country to be impacted by climate change which will result in its people being the world’s first environmental refugees,” Ms Stellato said.

“The Australian Government’s solution was to give money to aid this island rather than change our fossil fuel consumption. Certain politicians state that ‘loud, mouthy activists’ are stopping the fossil fuel industry and mining projects, such as Adani, from going ahead.

“That’s why today is important. Let us be the ‘loud, mouthy activists’ taking action and treating climate change for what it is – a crisis.”

The next climate strike will be at Mornington Park, 9-11am, Saturday 30 November.