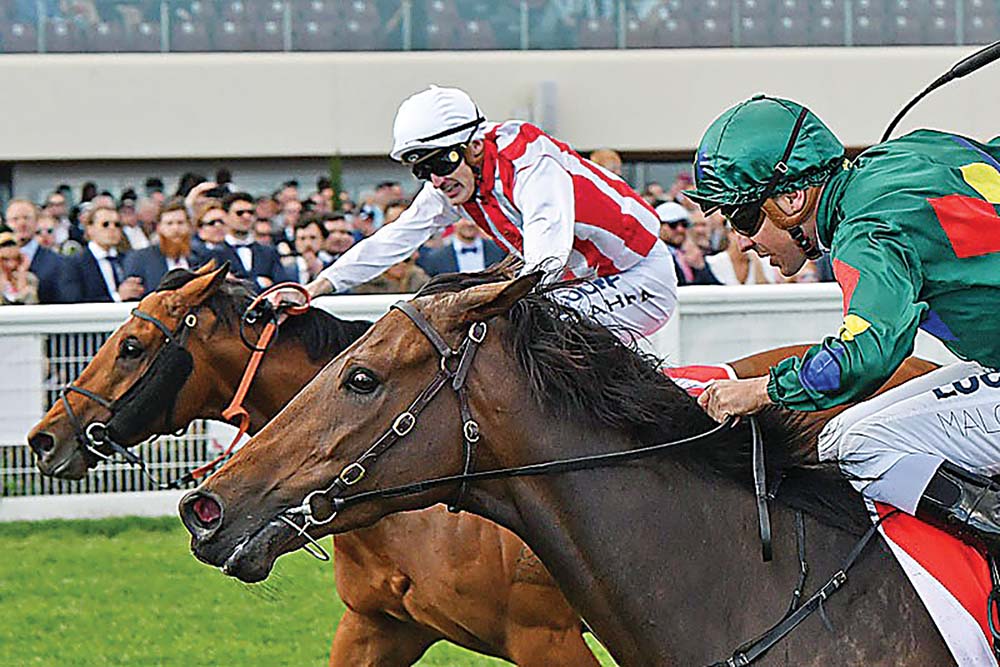 THE Anthony Freedman-trained Super Seth has steamed home to score one of the narrowest victories in the $2 million Group One Caulfield Guineas on Saturday 12 October.

The unbeaten Queenslander Alligator Blood looked home for all money after kicking a few lengths clear in the straight but the Dundeel three-year-old, Super Seth, unleashed a powerful final sprint to rush from near the rear of the field and get up right on the line.

Super Seth’s outstanding performance was backed up on the clocked as he ran the sixth-fastest last 200m for the entire meeting with a split of 11.31sec and ran the mile 0.73sec faster than the Godolphin-owned, Flit, in the Group One Thousand Guineas.

Part-owner of Super Seth, Jonathan Munz, also had Groundswell, who he bred and part-owns, finish in third place. Both horses are trained by Freedman at Munz’s Pinecliff property in Mount Eliza.

Freedman said it’s taken a fair bit of work to get Super Seth to where he is now.

“It doesn’t come naturally to him, he’s a bit goofy and does a few things wrong,” he said. “I wasn’t convinced he’d run a mile to be honest so we thought he may end up back at the Coolmore (Stud Stakes) but the target was always to try and win a stallion race with him.

“He had a good two-year-old prep and he came back well but he needed to lift to win today and I think obviously the winkers did that today.”

The win provided jockey Mark Zahra with back-to-back Group One victories after taking out the Group One Caulfield Stakes (2000m) aboard the Lindsay Park-trained Cape of Good Hope in the race prior.

“When I finally got him to balance and level out, he really let rip,” Zahra said of Super Seth.

“He’ll get even further I think, it’s just great because I’ve had a bit to do with him and I know a few of the owners. It’s great to see the plan all come together, he’s still learning, but the sky’s the limit.”

Munz and Freedman also combined with the three-year-old filly, Southbank, to place third by a head in the Group One Thousand Guineas.

As for Super Seth’s future, Freedman said he’ll likely go for a break and will concentrate on returning for the Autumn.