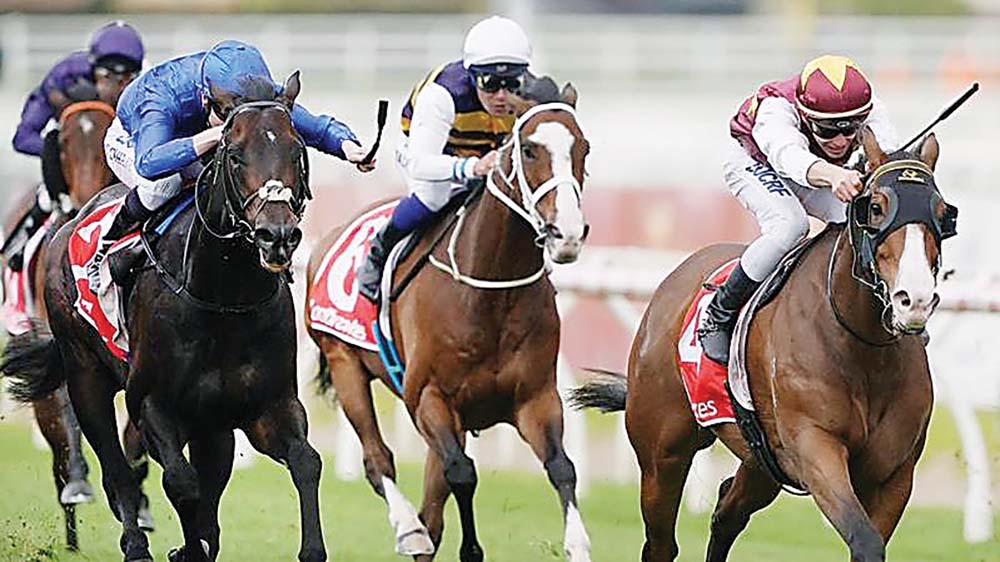 THE Shane Nichols-trained, Streets of Avalon, has once again been successful when racing on the quick seven-day back-up by winning the $200,000 Group Three Moonga Stakes on Saturday 19 October.

The stable star clearly overcame his tough run in the Group One Sir Rupert Clarke Stakes two weeks ago as he kicked clear in the Caulfield straight on Saturday to score a one-length victory over the Western Australian visitor, Variation, and Godolphin-owned, Royal Meeting.

Ridden by Ben Melham, the under-rated galloper bought up his third victory from the five-times he has raced on the quick back-up. His overall record now stands at seven wins and 15 placings from his 38 career starts.

Trainer Shane Nichols said he thought the five-year-old gelding would have to raise the bar with the weight he carried in the Moonga Stakes.

“With the 58.5kg today, I thought he would have to go up to another level again to win a Group Three race like this so I don’t know how high he can go but around this level he’s very competitive,” Nichols said.

Nichols said the barrier and potentially the distance of the Toorak Handicap (1600m) were the main reasons for his prior performance at Caulfield where he finished in 11th.

“It is just too far, if he had of drawn barrier two and had a soft run, he might have snuck somewhere but having to do work from the outside gate made it tough,” he said. “But today, they all sort of looked at each other. We got a lovely run – he was exposed early but hit the line like a demon.”

Streets of Avalon’s rating rose to 106 following the Moonga Stakes victory with his earnings surpassing $780,000.

Nichols has plenty of options moving forward into the Spring with the son of Magnus. Potential options include the Group One Cantala Stakes and a Group Three 1400m race on the final day of the Flemington racing carnival.

A trip to Dubai could also be on the agenda in the New Year.

“There’s a spread of races in Dubai early next year but his rating might have gone up a couple of points and made it a bit tricky, but we do have that in the back of our mind as well,” Nichols said.