New mayor gets luck of the draw 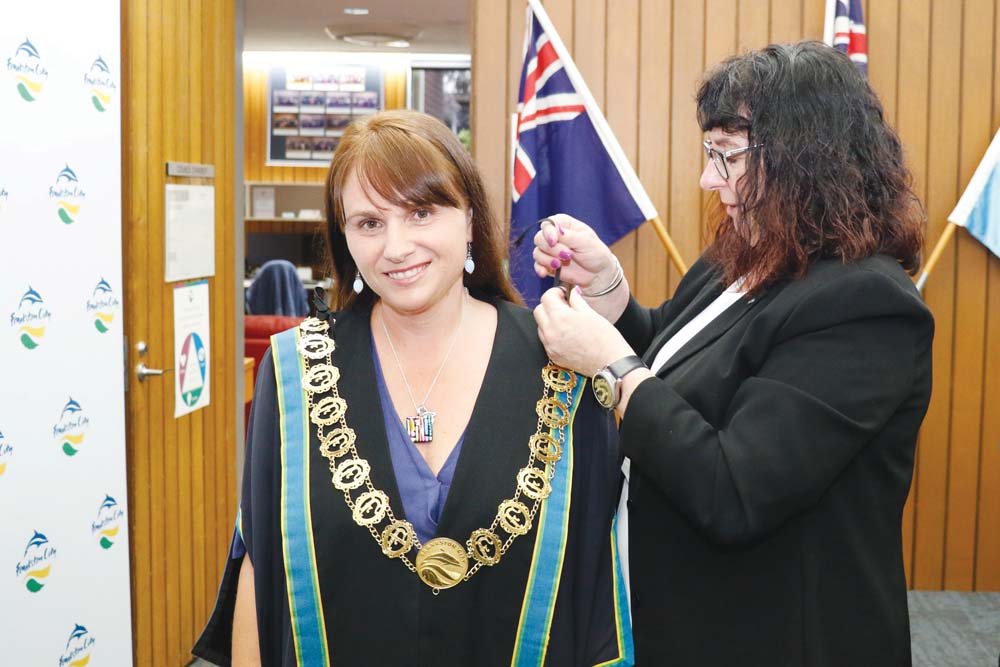 FRANKSTON Council has chosen their new mayor by drawing a piece of paper from a bowl.

Cr Sandra Mayer was elected as mayor of Frankston on Thursday, 7 November. Cr Quinn McCormack also put her hand up for the role, with votes for the two councillors split 4-4. A ballot was then held, with Cr McCormack drawing a piece of paper which read ‘defeated” from a bowl. This confirmed that Cr Mayer would occupy the mayor’s chair for her third stint in the top job.

Had Cr McCormack been elected, it would have been her first time as mayor.

Cr Mayer said protecting the environment would be a focus during her term as mayor.

“Environmental issues are a priority of mine. I’ve been extremely vocal about this during my time on council, and recently went on the record saying we are in a climate change emergency,” she said. “I’ll continue advocating in the chambers to find innovative ways to tackle local environmental issues.”

In her speech, Cr Mayer said “just the other week we made a decision to protect our Green Wedge, and I think that is a really landmark decision that we made and it’s taken years to get there. I could feel the anger of the landowners when I left that meeting, it wasn’t an easy decision to make. They all wanted to subdivide their land and sell it. I did not support that because once those open green spaces are gone they’re gone forever.”

Cr Mayer also said she would focus on improving the “culture” at council.

“Like it or not, we are role models for our community, and our officers, so I will therefore focus on working alongside our new CEO to continue improving the culture of our organisation, because a healthy culture results in better outcomes for our community.”

In her address to council prior to the vote, Cr McCormack said “given that the mayor is first among equals, my demonstrated collegiate approach and ability to take everyone with me will be an asset for council.”

“I have in my term in council introduced community strengthening programs such as the first ever reconciliation action plan, the inaugural policy to ensure gender equity is a strategy for this council, and I have also ensured we have policies that ensure good governance for this council,” she said.

After the draw was held, Cr McCormack told the mayor “I hope to see a lot more collegiality from you, given half of council didn’t actually know that your were intending to nominate for the mayoralty. It would have been nice if that was on the table for everybody.”

“I’m looking forward to working with you in this role, let’s have a great year but let’s make it really collegiate,” she said.

Cr Hampton said “I know you will do the position of mayor well, you’re trustworthy, you keep your word, and you are very close to your community. That is the very essence of a councillor.”

Cr Mayer takes over the role from Cr Michael O’Reilly. The new mayor paid tribute to the outgoing mayor and said “you’ve done an outstanding job of getting out there and promoting the good stories all around Frankston.”

Cr O’Reilly’s stint as mayor proved eventful, overlapping a state election and a federal election. In that time, former CEO Dennis Hovenden was also replaced, and the ratepayer funded municipal monitor finished up at council.

When Cr O’Reilly was elected mayor, council had outlined four projects as part of the Future Frankston initiative that they would try to advocate for state and federal funding for.

Extra federal funding for revamped facilities at Jubilee Park also was not secured, with council agreeing in October to put in an extra $9.74 million of ratepayer money to fully fund the project.

Council also lobbied state and federal governments to tip in over $8 million each for a new home for the Coast Guard at Oliver’s Hill. When those lobbying attempts failed, council voted to withdraw their $8 million in funding for the project and instead focus on moving the Coast Guard into the Yacht Club building.

Reflecting on his mayoral stint, Cr O’Reilly said “as mayor you see where people’s rates go, and you’re quite shocked at how many services, community centres, sporting infrastructures, how many people that the money goes to and benefits. Anyone who says that local council just collects the rubbish, that is rubbish.”

“As far as my year goes, it’s been a fantastic year. We’ve seen one of the biggest deliveries of infrastructure spending that we’ve ever seen. We’ve had some major wins, like the Jubilee Park stadium with its six new netball and basketball courts, indoor cricket facilities, at a cost of $35 million dollars ticked off a month ago. We were also able to successfully move the Frankston Tennis Club to Centenary Park, a 128-year-old club saved.”

Cr Bolam congratulated the outgoing mayor, saying that “the municipal monitor hasn’t released her report yet, but from all indications I think it’s looking good and you’ve played a big part in that. You had a really difficult year in letting one CEO go and conversely appointing what seems to be so far a great CEO.”

Cr McCormack said “you showed other mayors what collegiality means, you were able to bridge the divide and work with every councillor without fail, and that’s an incredibly impressive task.”

Cr Cunial said “I know it’s been a really tough year because of the makeup of the council, I think you’ve done splendidly.”

The vote for deputy mayor was also split. Crs Colin Hampton and Cr Glenn Aitken both nominated, and Cr Hampton was successful in the ballot.