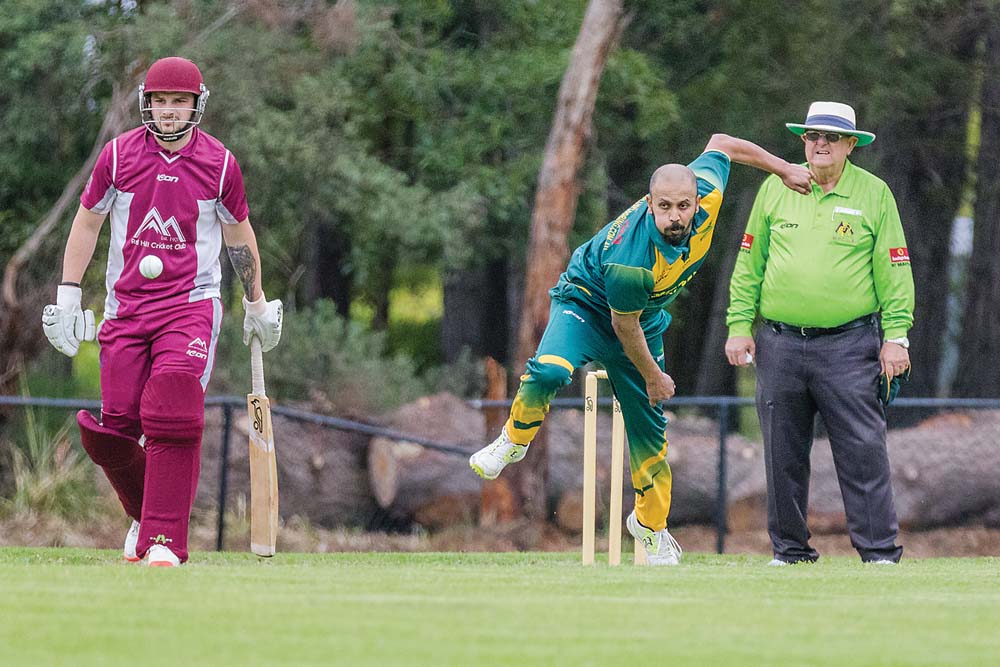 A KNOCK of 98 from Nick Jewell helped Long Island to a comfortable win over Pearcedale last weekend.

Pearcedale came in to bat first in the one day clash, and finished up at 8/143 from their 40 overs.

With Jewell in full flight, Long Island were able to reach their target with relative ease. They claimed the win with eight wickets and 18 overs to spare.

At Ditterich Reserve, a stunning century from Damien Lawrence helped Pines get a win over Main Ridge.

Lawrence came in as opener, and contributed to a brilliant 172 run second wicket partnership.

Pines set Main Ridge a target of 235 to chase down, and defended it well.

Main Ridge were not able to score at a quick enough rate, and finished at 4/113 at the end of 40 overs.

At Bruce Park, Somerville claimed a win over Heatherhill, chasing down their total of 152 with 8 wickets in hand.

Red Hill and Moorooduc’s clash ended up rained off, but not before Simon Dart managed to score an entertaining ton for the Hillmen.

A HALF century from opening batsman Henry Dolphin has helped Crib Point to a win over Mt Martha.

Mt Martha won the toss and chose to bat first. They found themselves struggling, and could only put 134 runs on the board before the expiration of their innings.

Crib Point had little trouble chasing down that total, and ended up securing victory with five wickets in hand and 13 overs left to play.

Delacombe Park also had similar fortune in their clash against Dromana, as they managed to chase down a total of 130 with 13 overs to play.

Hastings’ match at home against Carrum got off to a strong start. They went in to bat first and put 192 runs on the board, with Luke Hewitt reaching a half century.

Unfortunately for Hastings and Carrum, rain brought a premature end to their game.

Rosebud and Seaford Tigers also didn’t get a result on a rain interrupted day.

TYABB secured an impressive win last weekend in a rain interrupted round of Sub District cricket.

Tyabb set a total of 8/200 off their 40 overs, which would prove to be too difficult a mountain for Rye to climb. Jordan Baldes was Rye’s best with ball in hand, taking a five wicket haul.

At the end of their 40 over innings, Rye were just under 70 runs short of victory.

At Peninsula Reserve, Frankston YCW nabbed the win in a low scoring clash against Carrum Downs.

The Stonecats were sent in to bat first and only put 71 runs on the board before being bowled out.

Faced with the difficult task of defending their small total, YCW’s bowlers were impressive. Levi McLoughlin-Dore was influential, posting career best figures of 5/13 to help restrict Carrum Downs to just 44.

Playing on the road against Boneo, Ballam Park batted first and set a decent total of 186. With the weather starting to turn, Boneo looked to make quick work of it and score quickly.

In the end, the rain won out and the match was called a draw.

Tootgarook and Balnarring also couldn’t fight through the weather, and had their clash called a draw.

Skye and Seaford’s match was also rained off.

MORNINGTON played host to Baxter on Saturday in a competitive clash.

Mornington were sent in to bat first, and got off on the wrong foot when they lost opener Matt Foon for a duck.

Baxter’s top order put on a good show in response, with Dale Irving and Daniel Warwick falling just short of their half centuries.

Baxter ended up victorious, getting the win with five wickets in hand and eight overs left to bat before stumps.

Mt Eliza played well and put 180 runs on the board against Langwarrin, but couldn’t get a result as rain brought an end to the day. Bad weather also stopped play between Peninsula OB and Baden Powell.