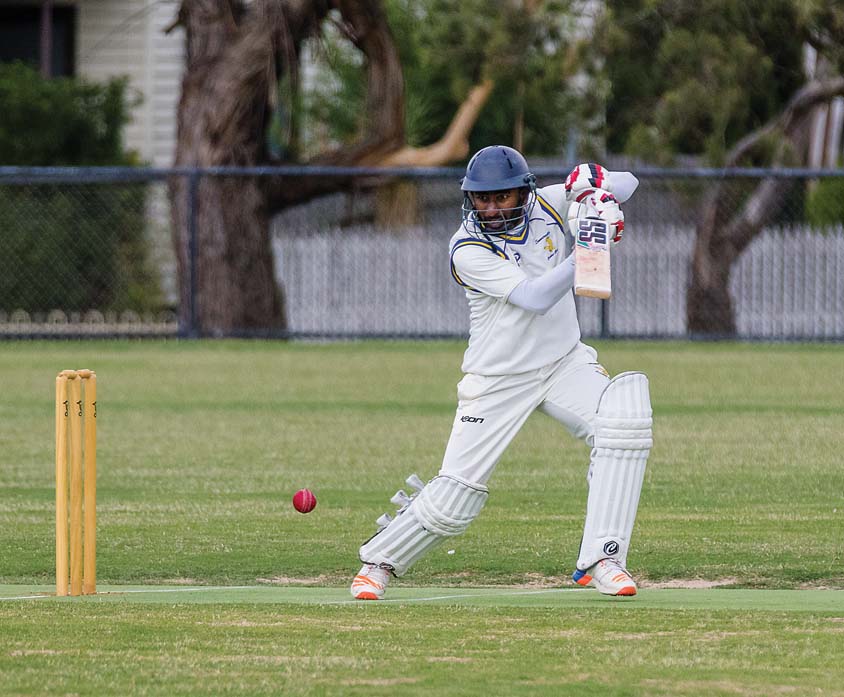 PINES have fallen to a first day defeat in their two day clash against Somerville.

Pines were sent in to bat first and struggled from the outset. None of their top order batsmen managed to reach double digit figures, and they were rolled for a disappointing total of 94.

Star bowler Jayde Herrick was in fine from once again for Somerville, posting figures of 5/28 in their first innings.

Somerville made quick work of their target, and finished the day at 3/103 from 35 overs.

At Ballam Park, Red Hill are on the verge of securing victory in their match against Long Island.

Long Island chose to bat first and got off to a decent start. They were in a good position at 2/86, but soon completely collapsed to be all out for 112.

Red Hill finished at 2/80 at stumps, in pole position to get the win.

A brilliant century from Sam Mullavey helped Heatherhill to a big first innings total against Pearcedale.

Mullavey made 105 runs before being dismissed. Heatherhill ended up setting Pearcedale a target of 250 to chase down.

Pearcedale struggled with the bat before stumps was called, and will restart on day two from 3/28.

At Ditterich Reserve Moorooduc finished their first innings at 8/252.

AN impressive knock of 89 from batsman Shaun Foster has helped Carrum set their opponents a target of 229 to chase down.

Up against Seaford Tigers, Carrum got off to a shaky start on Saturday and looked in trouble at 4/57. Foster helped to steady the ship and guide his side towards a defendable total.

Delacombe Park batsman Ricky Ramsdale also impressed with the willow, as he put 85 runs on the board against Mt Martha.

Ramsdale didn’t receive much support from his teammates, and Delacombe Park ended up all out for 170 off just under 60 overs. Mt Martha’s run chase got off to a positive start, and they will start day two from 0/40.

Playing host to Dromana, Hastings chose to bat first on their home turf and were sent packing for 141. A tail order collapse did the home team no favours. They were in a decent spot at 6/132 before losing 4/9 and being dismissed.

Dromana’s run chase didn’t get off to the smoothest start. They made 2/17 off 20 overs before the close of play.

At Cyril Fox Reserve, Crib Point elected to bat first on day one and made 180 runs. Rosebud batted for three overs before stumps, making a quick 18 runs.

A CENTURY from Ryan McQueen was the highlight of Seaford’s huge first innings against Carrum Downs.

McQueen made the Kananook Reserve pitch his own with a phenomenal knock of 111 runs. Seaford were dominant, setting Carrum Downs a mammoth target of 302 to have to chase down on the second day of play.

Shane Smith worked hard and was the best of the bowlers for the afternoon, taking 5/110 off 33 overs.

Skye had a tough day at home as they played host to Tyabb.

Skye were sent in to bat first and had trouble. They ended up all out for just 93 off 44 overs.

Tyabb bowler Heath Straughair was impressive with the ball, taking 5/19 off 12 overs.

The away side made quick work of their target, and finished the day at 3/135 off just 26 overs. Openers Nick Taranto and Michael Edwards each reached their half centuries for Tyabb, putting together a 118 run opening stand.

Tyabb declared and Skye made 3/38 in their second innings before stumps. A bad start on day two puts them at risk of an outright loss.

Tootgarook declared at 7/129 with their sights firmly set on an outright win. Rye will restart on day two from 1/ 8.

Ballam Park made 150 runs before being dismissed in their clash against Balnarring.

Balnarring look set to claim victory on day two. They will restart from 2/88.

A HAT trick from Mt Eliza bowler Nicholas Baron was the highlight of day one in his side’s clash against Baxter.

Baxter chose to bat first, and the decision didn’t pay off. They were dismissed for 98 runs.

Baron’s hat trick helped him reach his best ever bowling figures for his club. He finished with 6/24 off 25 overs, including 12 maidens.

Flinders will have their work cut out for them on day two to chase down a formidable target set by Baden Powell at BA Cairns Reserve.

Rhys Elmi had an excellent day, putting 81 runs on the board for Baden Powell off 100 deliveries. His innings included 11 fours and 2 sixes.

Baden Powell were eventually bowled out for 249. Flinders made a good start to their run chase, sprinting away to 0/45 off their five overs played before stumps.

Morrnington played host to Sorrento on Saturday and managed to put 180 runs on the scoreboard before being sent packing. Sorrento batted for nine overs before the end of play for the day, and made 0/26.

At Lloyd Park, Langwarrin made 186 runs in their first innings against Peninsula OB.

Old Boys bowler John Forrest was their best performer for the day, posting figures of 4/46.