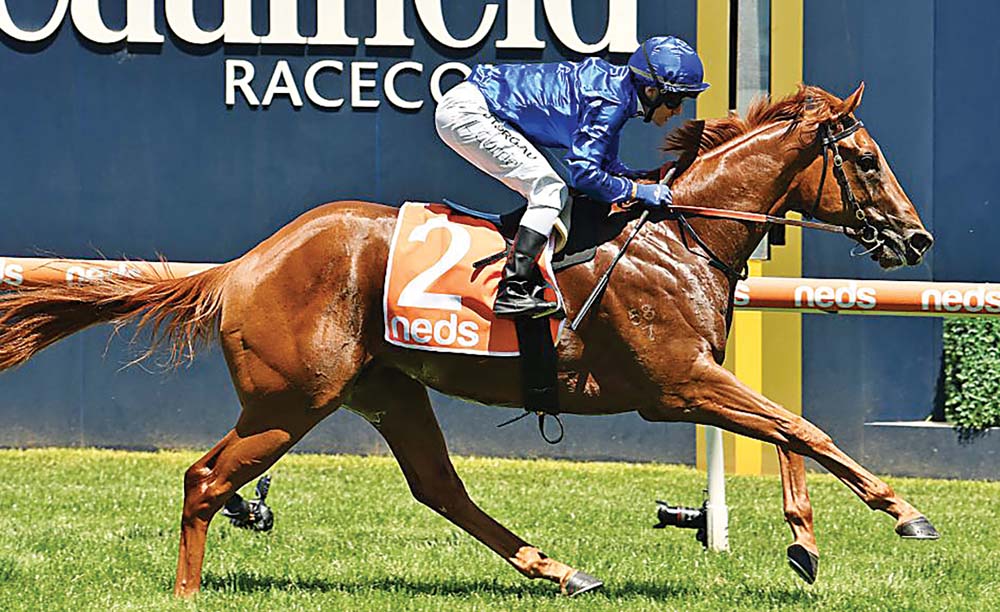 ANTHONY Freedman and Luke Currie have again struck juvenile success with the Godolphin blue as Hanseatic stormed home for a dominant win in the $140,000 Listed Blue Diamond Preview (1000m) for colts and geldings on Saturday 25 January.

The combination joined forces to claim the $1.5 million Group One Blue Diamond Stakes with Lyre last year and look well positioned to try and emulate those heroics once again as the son of Street Boss shot to $3.40 favouritism following his emphatic victory.

Despite settling wide without cover after drawing the outside barrier, the classy colt still managed to reel off a slick 10.62 seconds split from the 400m to the 200m to overhaul his rivals and eventually be eased down for a 2.5-length win over Glenfiddich and Fixated.

The stable openly spoke about the quality of the colt leading into the event and believed that he’d take good improvement from the run, having been more on the fresh side for his resumption.

Pinecliff-based trainer Anthony Freedman said he’ll look to give Hanseatic another start before lining up in the Blue Diamond Stakes on Saturday 22 February.

“Going forward to bigger races you want to see them put up a performance like that and put themselves ahead of them in an emphatic way,” Freedman said post-race.

“He was a bit fresh and I’ll probably run him in two weeks because of that.

“I don’t always think that way, but I think this colt might need the racing and getting used to the routine of raceday. He was a bit hot at Sandown and a bit hot again today so hopefully that’ll improve.”

For comparison, the fillies Blue Diamond Preview ran an overall quicker time of 57.27 for the 1000m compared to Hanseatic’s win in 57.48 but the turn of foot and sectionals that he recorded in doing so were superb. Hanseatic ran his final 600m in 33.04 and broke 22 seconds for his final 400m running it in 21.75.

The win was also the stables fourth victory with two-year-olds this season and was jockey, Luke Currie’s, sixth two-year-old winner for the season. Four of those have come at Listed level and another being his biggest success so far in the $2 million Magic Million Classic at the Gold Coast a fortnight ago.