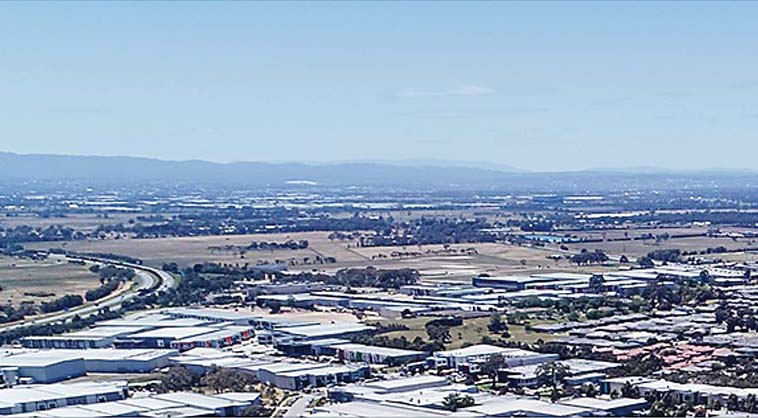 NEXT to the near-full Carrum Downs Industrial Estate is a parcel of green wedge-zoned land on the right of EastLink (the curving road) being promoted as suitable for a eco-industrial park. Picture: Supplied
Share
Facebook Twitter LinkedIn Pinterest Email

AN investigation into rezoning green wedge land in Carrum Downs for industrial use will not go ahead.

Frankston councillors had voted on 14 October 2019 to reject the move, but the investigation was brought back up for debate at their 28 January public meeting. Cr Colin Hampton moved a motion which, if successful, would have withdrawn council officer’s authority to “write to the Minister for Planning about amending the Frankston planning scheme to include the Frankston Green Wedge management plan” and directed them to “not proceed with implementing its resolution of 14 October 2019 concerning the Frankston Green Wedge management plan.”

The motion was defeated, with Crs Hampton, Michael O’Reilly, and Brian Cunial voting to investigate the potential rezoning of the land.

Some councillors expressed concern that their previous resolution approved in October to authorise council officers to write to the planning minister about the Frankston Green Wedge Management Plan had not been acted on. Cr Kris Bolam said ”the organisation is duty bound to act on a resolution.”

“Three months have passed on the minister has not received our correspondence,” he said. “Something has gone wrong.”

Frankston Council CEO Phil Cantillon confirmed to The Times that “council wrote to the minister on 29 January foreshadowing that a request to amend the planning scheme would be sought in respect of the Green Wedge. Council expects to submit the paperwork following the formal adoption of the January minutes which will occur in February.”

When asked why there was a delay in corresponding with the minister after the October meeting, Mr Cantillon said “while draft minutes enable actioning of some resolutions of an operational nature, it is usual for those policy matters requiring ministerial approval to be accompanied by final adopted minutes.”

Mr Cantillon said that “Cr Hampton flagged his intention to submit a notice of motion 22 October to overturn council’s previous resolution following his return from leave.”

The Times understands a letter has been sent to the Ombudsman signalling concern about council’s process in acting on the original resolution.

Cr Quinn McCormack said “this is an issue of governance. We passed a resolution and for three months officers have done nothing.”

“How can we have confidence in our governance if one councillor can hold up a resolution for three months,” she said.

Cr McCormack also spoke in opposition to the rezoning of green wedge land. She said the argument of “jobs necessity” was “the same argument used to enable slavery.”

“An industrial ecological park is an oxymoron,” she said. “The six star environmentally friendly option would be to not do this at all. It would be utterly reckless to support this motion.”

Cr Hampton said “this is about our future. We must make sure our children are able to get employment.”

“Employment for youth is at 27 per cent in North West Ward, it’s the worst in the state. That is terrible,” he said.

The debate broke down into shouting across the chamber at numerous points during the night.

Cr Hampton’s campaign was aided by the Committee for Greater Frankson, who created a video at Cr Hampton’s request which was played at the meeting. The committee also made a submission to council at the meeting through CEO Ginevra Hosking.

Cr Steve Toms said “it is astounding that the Committee for Greater Frankston shows scant concern for the CAA.”