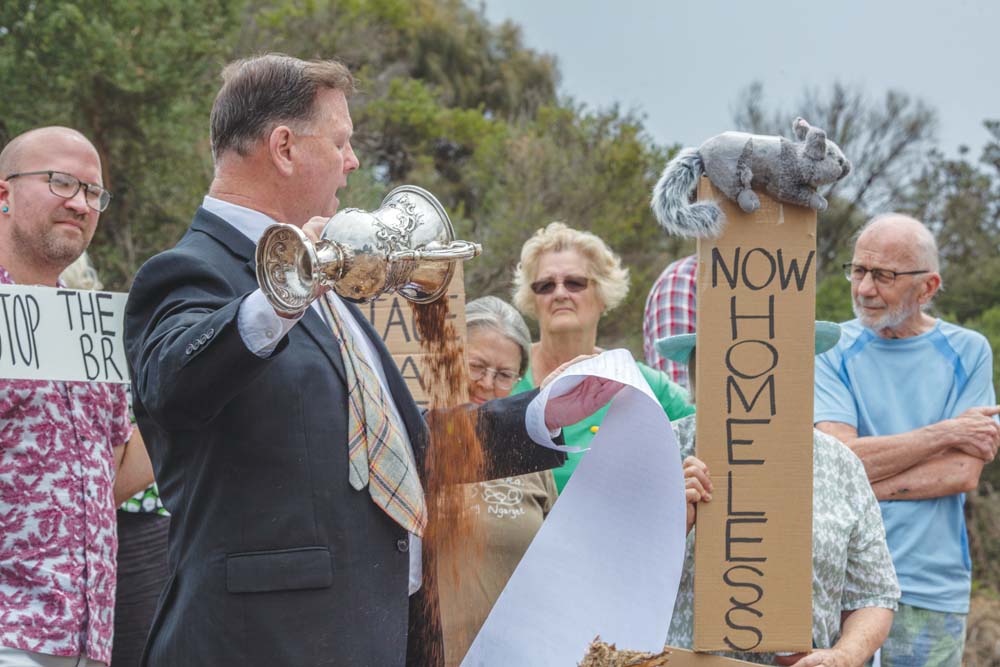 RESIDENTS rallied at Seaford Station last week to voice their anger at the destruction of vegetation caused by level crossing removal works.

A Frankston councillor delivered a “proclamation” at the site of the damage on 23 February, condemning the removal of vegetation. Cr Glenn Aitken read from a lengthy scroll, proclaiming “today is an opportunity to send a clear message to parliament and authorities that our natural environment is not negotiable, and must be protected.”

“This is a proclamation on behalf of our community to stand strong against planning totalitarianism, and to challenge any government or authority that claims to have listened to the community, and then turns around summarily to brutalise the land and places we all love,” he said.

Cr Aitken poured a chalice containing wood chips onto the ground at the site. “These remnants are from a tree that was about 80 years old,” he said.

“It therefore began its life as a young seedling at the end of the Great Depression and the outbreak of World War II. It saw the reconstruction years of the 1950s, and continued to spread its branches providing shelter and food to native birds and animals. It saw the turn of a millennium and continued to cast welcomed shade and hold its place with pride in our landscape, until this February when it was unforgivably dragged to the ground and destroyed.”

The LXRP says it has complied with requirements for vegetation removal on major infrastructure projects and in accordance with project approval. Level Crossing Removal Project program manager Adam Maguire said “we’ve planted more than 100,000 trees, indigenous plants and shrubs as part of Seaford’s $10 million revitalisation, including Coast Banksia trees from seeds collected in the area.”

“More than six kilometres of new shared use path will connect Carrum to Frankston as level crossing removal works progress along the Frankston line,” he said.

At council’s 17 February meeting, councillors voted to write a letter to the LXRP “expressing its serious concerns at the recent removal of high value and old growth vegetation along the shared user path alignment, particularly around Armstrongs Road and Station Street, Seaford, and seek an assurance that further vegetation removal works will be paused pending a more thorough consultation with both council and the community.”

The motion approved by Frankston councillors read that council “notes community feedback and outcry is increasing as a result of additional vegetation loss. The complaints are centred upon the extremely high value of the limited amount of native coastal vegetation that has survived historically and is now under further threat”. Council also agreed to support “in principle the proposed alignment along Riviera Street, Seaford, as this option has lesser impact on vegetation compared to the proposed alternative along the railway line.”