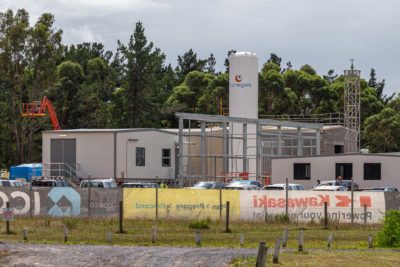 MORNINGTON Peninsula Shire’s declaration of a “climate emergency” may put it on a collision course with both state and federal governments over the Port of Hastings.

Two significant moves made by the shire last month could lead to it opposing hydrogen gas produced in the Latrobe Valley and opposing a container port because of potential environmental, social and economic impacts on Hastings.

The project consortium is led by Kawasaki Heavy Industries and Hydrogen Engineering Australia and has received $50 million each from the state and federal governments.

The shire has demanded a full environmental assessment and that environmental impacts of the hydrogen project be known before any decision is made beyond the initial test stage.

The project has been criticised because it will see Australia left to deal with the CO2 emissions resulting from the process while Japan gets the full benefit of “clean” hydrogen fuel.

A drilling rig is testing the seabed about eight kilometres off the Ninety Mile Beach for its suitability for storing CO2 from the hydrogen process.

The state and federal governments have been reported as already contributing $150m to the tests being carried out by CarboNet with a view to the undergropund storage being part of the Hydrogen Energy Supply Chain project.

Environment groups say there are other ways to produce hydrogen that do not involve releasing CO2 stored in brown coal but following those production methods would not provide jobs in the Latrobe Valley or open up a new way to exploit one of Victoria’s natural resources.

The mayor, Cr Sam Hearn told The Times that making hydrogen from brown coal was “not good” unless its proponents could “tick off all environmental concerns”.

He said politicians “need to think 50 years ahead” instead of initiating new fossil fuel projects.

In another move potentially affecting state and federal governments, the shire has ordered its officers to prepare a report for next month (April) “detailing the environmental effects of any container port or any other port development at Hastings”.

The councillors want the report to “explain the business case used by council in its past supporting a Hastings container port”.

The state government back flipped on its earlier plans for a container port at Hastings after receiving a May 2017 recommendation from Infrastructure Victoria that it instead be built at Bay West, in Port Phillip.

At that stage, Infrastructure Victoria based it recommendations against Hastings, in part, on such predicted environmental impacts as loss of seagrass meadows; impacts on fish, saltmarsh (potential habitat for the orange bellied parrot) and mangroves; and potential loss of habitat for shorebirds.

Cr David Gill, who moved at council’s 17 February Planning Services Committee meeting that the shire officers prepare a report, said Frankston Council had already changed its mind and withdrawn support for a container port at Hastings.

The use of thousands of hectares of land from Stony Point to north of Hastings, has virtually been quarantined for “port related purposes” since the 1960s when Western Port was flagged as the site for Victoria’s second major port.