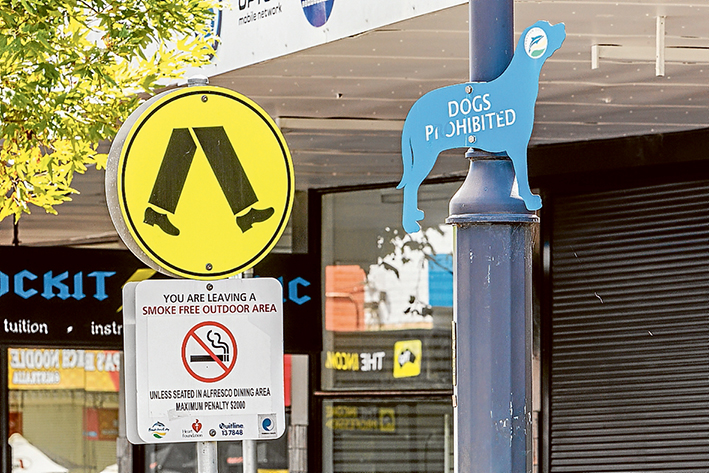 FRANKSTON Council has decided to deny the community a say about allowing dogs into the city centre.

All dogs are currently prohibited from being inside Frankston’s city centre.

Council was considering consulting with ratepayers about “permitting dogs in the central activities area of Frankston” as part of its review into its Domestic Animal Management Plan. Council eventually voted to go through with the review, but to not consult with the community on the future of dogs in the city centre.

Cr Glenn Aitken, who asked for consultation about dogs in the city centre to be removed from the council motion, said “we know it loud and clear that this is a highly divisive issue. I am focused on bringing the community together and moving along with our community on points that are agreed and that everyone is saying would be better for our community.”

“I don’t believe it is appropriate to again raise this same divisive issue,” he said.

Cr Steve Toms said “a lot of traders and people in Frankston would like dogs to visit the city centre legally without being fined under the local law.”

“It’s a shame that this is being taken out of public consultation and the public are not being given the chance to say how they feel. It’s very shameful in my opinion,” he said.

The community will be consulted on “free roam areas on the foreshore, cats roaming outside of their premise, fenced free roam areas, dogs being walked on sports ovals, and owners feeling safe when walking their dogs” as part of the review.

The mayor Sandra Mayer said “the topic has been debated over many years and to address this, council has held two separate and extensive community consultations on the issue as part of previous Domestic Animal Management Plan reviews.”

“From these consultations, feedback revealed more than 50 per cent of residents do not want dogs introduced into the city centre, due to safety concerns, so the ban was upheld,” she said. “The motion to remove this topic from the upcoming DAMP community consultation was about ensuring other important issues covered in the plan aren’t overshadowed.”