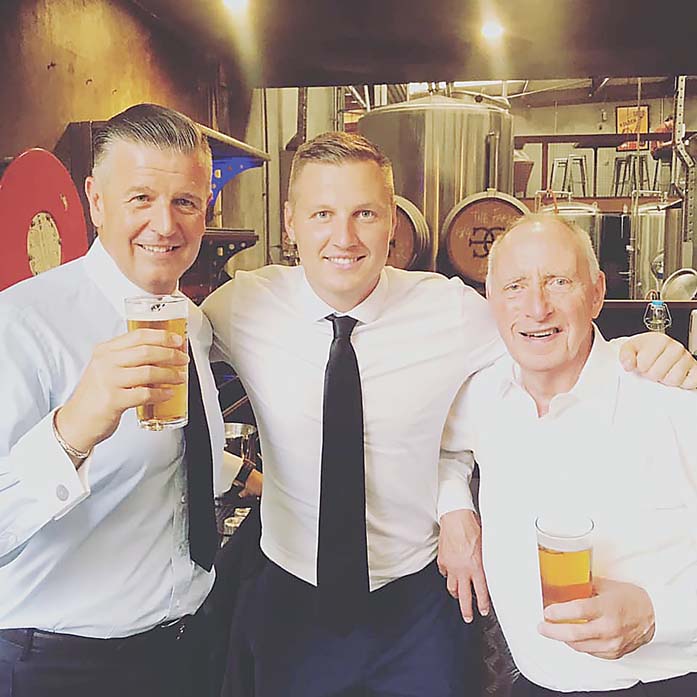 He had collapsed a week earlier prior to a practice match at Dallas Brooks Park against Caroline Springs George Cross which was abandoned.

Originally from Manchester in England the 77-year-old has been a much-loved figure at Mornington for decades.

Other local clubs have used social media to show their support for Mornington and the McKay family during this difficult time.

Mornington’s facebook page summed up the depth of feeling for McKay with these words:

“Tony was a pillar of our club and touched the lives of so many, young and old, in over 25 years at the club.

“A more loved man you will never meet; it’s hard to put into words what Tony means to so many.

“His caring nature, willingness to always help out and his true dedication and love for the Mornington soccer club and all the players was something to behold.

“Tony’s sheer presence in the changeroom was enough to lift the spirits of the group [and] through the good and bad times he was always there willing to talk to the players, coaches or supporters and made sure everyone had whatever they needed.

McKay lost his soulmate and long-time partner Cath almost three months ago and is survived by daughters Jess and Claire.

Whiteoak and Currie were part of Langwarrin’s 2017 championship side while Brooks had attracted interest from Mornington and Casey Comets before re-signing for a fourth season at Strikers.

Whiteoak had a short stint with Strikers towards the end of the 2018 season while Currie includes Hume United and St Albans Saints on his résumé.

Currie’s move came as a shock as he was announced by State 1 side Beaumaris on 30 January as one of its new signings.

Currie, Whiteoak and another newcomer in attacking midfielder Shane Tagliaferro were among seven ex-Langy players who lined up against State 1 North West outfit Keilor Park in the FFA Cup at Centenary Park last weekend but the visitors dominated this contest eventually winning 4-1.

If not for Strikers keeper Robbie Acs the scoreline would have been embarrassing.

Currie’s only chance came in the 37th minute but he shot straight at Keilor keeper Frano Saric who parried at his near post.

Keilor’s Japanese trio of brothers Kotaro and Tatsuya Kuwahara and Hibiki Nakamura caused problems throughout and Strikers struggled to match their movement on and off the ball.

The opener came in the 20th minute when Nakamura jinked past Strikers right back Tuach Ter on the left and chipped the ball to an unmarked Kotaro Kuwahara setting up the smallest player inside the Strikers area with a free header and he made no mistake.

Ter gave the ball away two minutes from half-time and when it eventually fell to James Johnston his volley into the top near corner of goal made it 2-0.

Strikers hit back with their first shot on target in the second half when Ben Doree struck the ball home in the 69th minute.

That gave some hope to local fans but the natural order was restored in the 85th minute when the Japanese trio combined down the left with Nakamura’s cutback being met by Tatsuya Kuwahara who rode the initial challenge and tucked the ball neatly past Acs from close range.

It was party time now and when you play a high defensive line against Keilor you are flirting with danger.

In the 89th minute Kotaro Kuwahara broke into a one-on-one with Acs and stroked the ball past the helpless keeper to make it 4-1.

Strikers can take some consolation from knowing that this wasn’t their strongest line-up and they are unlikely to face many sides of Keilor’s quality.

At least they’ll hope so.

In another FFA Cup match on Saturday Langwarrin ran out a 3-1 winner away to Warragul United.

After a scoreless first half a defensive mistake allowed the home side to take the lead in the 50th minute.

The Lawton Park side was joined in the next round of the competition by Mornington and Seaford United.

A Josh Hine double guided Mornington to a 2-1 win over Altona East Phoenix at Dallas Brooks Park while State 4 outfit Seaford recorded a 2-0 victory away to State 3 opponent Upfield.

Isaac Harrison’s toe-poke past the advancing Upfield keeper opened the scoring in the 17th minute.

Dylan Waugh missed a penalty in the 44th minute but made amends shortly after when Conor Mcfall’s through ball set up a one-on-one and Waugh converted to give the visitors a two-goal buffer which they maintained in the second half despite Upfield’s pressure.

Skye United went down 2-1 to Fawkner  after extra time in their cup clash at Lawton Park last weekend.

Two penalties in normal time, one to Fawkner in the first half and a second-half conversion from Skye striker Mikey Turner sent the contest into an extended 30-minute period.

Fawkner’s winner came in the first half of extra time.

In other news Frankston Pines’ Fijian international striker Tito Vodawaqa has been nominated for his country’s 2019 Player of the Season award.

Vodawaqa is one of three nominations for the prestigious award and is expected to make a major impact in State 3 this season.

Here are the local senior squads for 2020 with the previous club of new signings in brackets:

As we went to press Football Victoria was expected to make an announcement regarding the upcoming season and its response to the coronavirus pandemic so please check relevant social media.

As things stand here are this weekend’s round one league games: