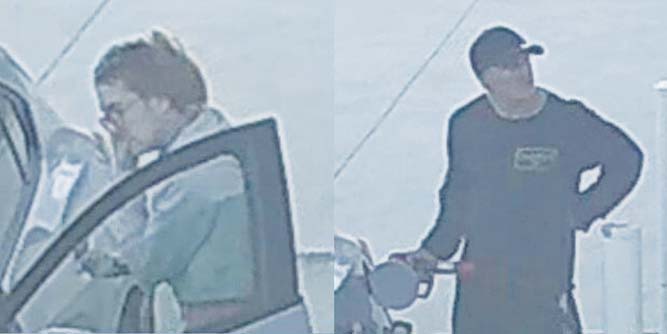 POLICE are searching for a man and woman who drove off from a Cranbourne-Frankston Road petrol station without paying, 18 March.

At around 8.40am a silver Mazda 3 with the cloned registration plates AJK 990 pulled into the Cranbourne service station and filled up with nearly 40 litres of fuel. A man pumped the fuel into the vehicle, while a woman was also seen exiting the vehicle to talk to the man.

The pair entered the car again after filling up and left without making an attempt to pay.

The man is described by police as “approximately 40 years of age wearing a black shorts, a black t-shirt and a black cap”. The woman was described as “wearing a white jumper, glasses and had her hair tied up in a bun”. An image of two people (pictured) police wish to speak to has been released.

Anyone with information is urged to contact Crime Stoppers on 1800 333 000 or submit a confidential crime report at www.crimestoppersvic.com.au