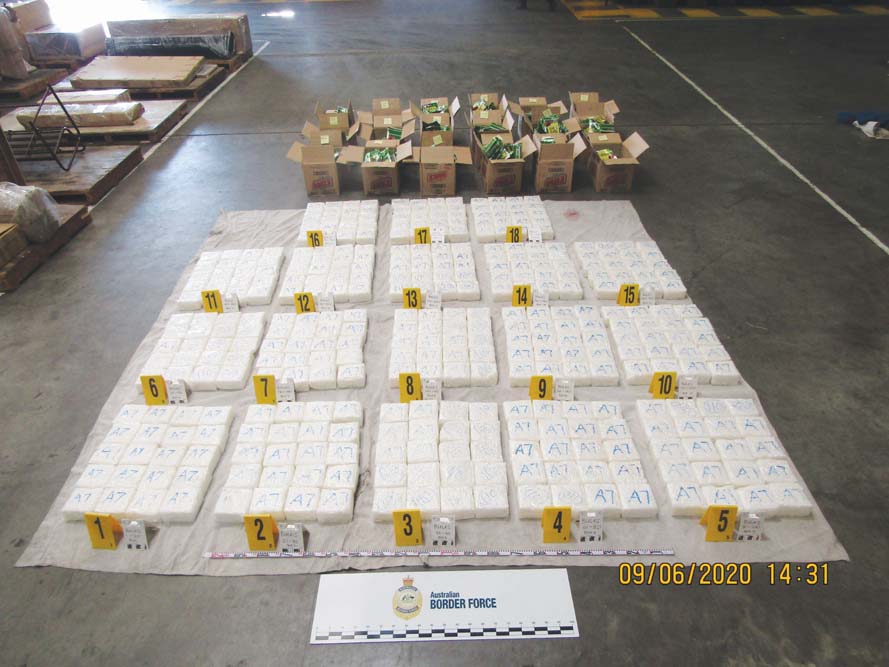 A PATTERSON Lakes man has been arrested and charged after police seized 360 kilograms of crystal methamphetamine from a shipping container which had arrived from Malaysia.

On 8 June, Australian Border Force officers examined a shipping container of furniture which had landed in Melbourne from Malaysia. Inside the container alongside the cargo, they found 18 unidentified cardboard boxes.

It is alleged that the boxes were filled with small packages, which when opened and tested returned a presumptive positive result for methamphetamine.

Approximately 360 kilograms of drugs were seized, which police estimate had a street value of up to $180 million.

In the early hours of 17 June, Australian Federal Police officers arrested a 36-year-old man at a Patterson Lakes home. They then arrested two Malaysian men at a property in the Melbourne CBD.

The three men were charged with attempting to possess a commercial quantity of a border controlled drug. The Patterson Lakes man was remanded in custody, and the two Malaysian nationals faced the Melbourne Magistrates’ Court on 18 June.

AFP officers also executed search warrants at properties in Carrum, Williams Landing, and Cheltenham as part of their operation.

AFP southern command assistant commissioner Bruce Giles said “our enquiries into the exact source of the drugs remain ongoing. We will continue to work closely with our overseas partners to target the criminal syndicates behind this importation and attack the links they have to Australia.”

“These arrests should serve as yet another warning. Even despite COVID-19, the AFP and its law enforcement partners continue to double-down on organised crime, working harder to outsmart the criminal networks in order to dismantle and prosecute them at every opportunity,” Mr Giles said.

“Had this drug seizure made its way to Australian streets, countless lives would have been affected. Drug users, healthcare workers who deal with drug issues each and every day, and families torn apart from the scourge of illicit substance abuse.”

Australian Border Force regional commander Craig Palmer said “the ABF uses a variety of methods to find illicit drugs, including x-ray, detector dogs and a range of sophisticated substance detection technologies.  Our techniques and intelligence is constantly evolving, and so is the dedication and ability of our highly trained officers.”

“Criminals continue to find different ways to try to hide harmful drugs, and while concealment methods are getting more advanced, so is the ABF’s ability to detect them.”