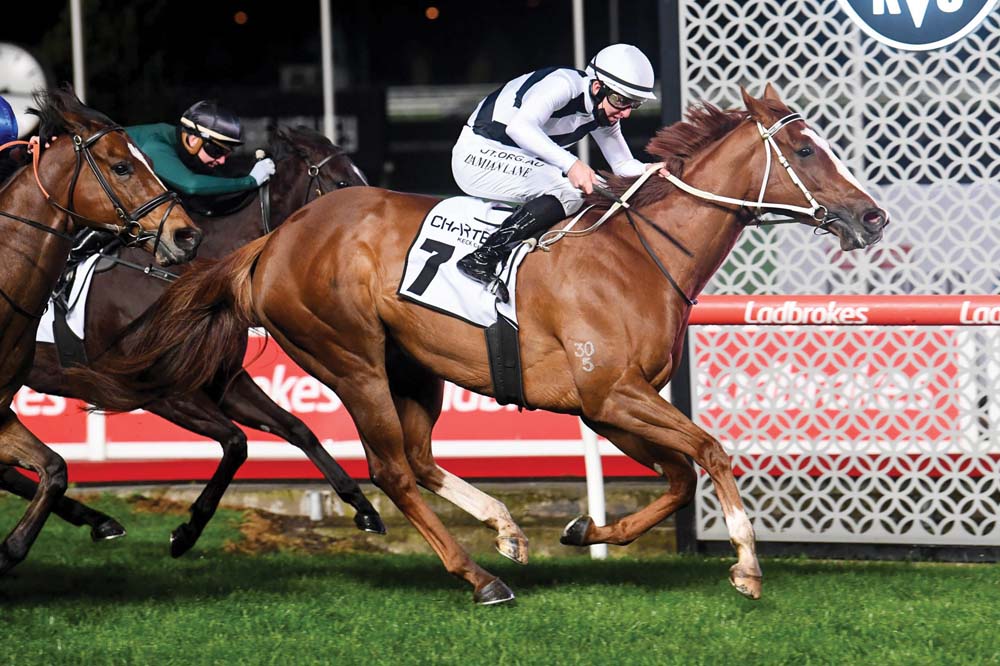 CHRIS and John Meagher’s speedy mare, Pippie, ran her rivals off their legs to take out the Group One Moir Stakes and pick up her second Group One success on Friday 25 September at The Valley.

The five-year-old daughter of Written Tycoon extended her flawless first-up record to four wins by making every post a winner in the feature $1million sprint.

Replicating her first-up win in the Group One Oakleigh Plate last preparation, Pippie again utilised her blistering early speed and controlled the race before holding on to land a 0.8-length victory over Godolphin’s Trekking and the Will Clarken-trained Bella Vella. Another Mornington-trained runner Brooklyn Hustle for Warren/Krongold Racing flew home to finish in fourth.

Mornington-based co-trainer Chris Meagher was stoked to see his mare land their main target for the Spring.

“To win a race of this calibre is such a huge honour and I’m just rapt for everyone involved,” Meagher said. “We know how fast she is, and we know she can sustain that, so I was rapt with how everything worked out.

“Damian (Lane) rode her [at the Mornington jumpouts] twice and was rapt with her so we came here confident as you can be going into a Group One, and to pull it off is just amazing.”

Despite crowds not yet allowed at the Victorian races, Meagher said the ownership group would still be giving a massive cheer from home.

“They’ll be on the Gold Coast right now going absolutely troppo,” he said. “They’re a terrific bunch of guys Marty and Glen Heran together with their racing manager Katrina Smith. They’re just unbelievable supporters of ours and I’m just so over the moon for them.”

Pippie holds nominations for the Group One Darley Sprint Classic (1200m) at Flemington and the Group One Manikato Stakes (1200m) again at The Valley next month. Brooklyn Hustle is also likely to take a similar route.

Matt Laurie’s up-and-coming Alfa Oro was another dominant performance on The Valley card from the Mornington-based trainers.

Running in the 955m 55-second Challenge, the five-year-old gelded son of Bachelor Duke (USA) led the entire trip to score a comfortable two-length victory in a time of 55.9 seconds.

With the ease of the victory, trainer Matt Laurie said he’ll now be aiming for higher targets with his promising sprinter.

“I’m happy to keep his winning record going for the moment but we’ll be happy to step up to black type now,” he said post-race. “He’s just a true racehorse and made that look very easy.”

“Should he get the job done next start then perhaps there’s a race here further on that might suit. There’s the Caulfield Stakes over 1000m or perhaps the Schillaci Stakes (1100m) next start and that could possibly lead to a Manikato should we dream but why not? He’s doing everything very well.”