Pines steady to win, Dromana across the line against Hastings, Tyabb come close 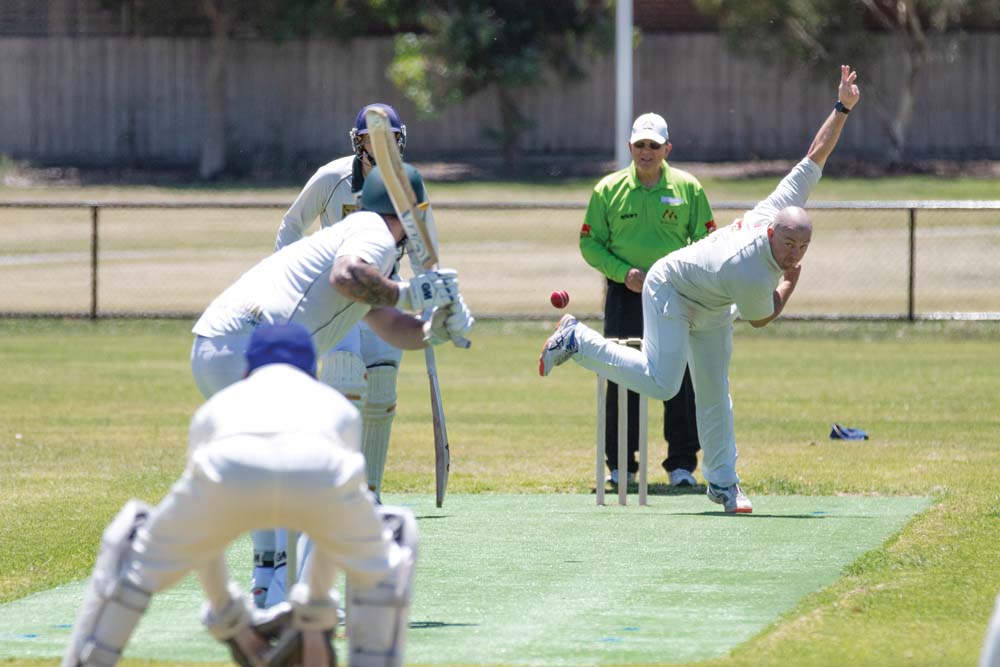 A BIG score from Damien Lawrence got Pines over the line in their clash against Long Island.

Long Island chose to bat first and got off to a horror start, losing both openers for a combined total of just one run. Losing star batsman Nick Jewell for one proved a huge blow. Jewell’s output this season has been down compared to his usual lofty standards.

Long Island ended up all out for 144.

Pines’ run chase was a little shaky to start off with, as they fell to 2/11. Opener Damien Lawrence held his ground though, and ended up scoring 87 not out.

Lawrence has started well in all of his innings this season, but ended up out for less than 30 each time. He made this match his own though, helping his side to a four wicket win.

At Bruce Park, Heatherhill claimed a win over Moorooduc.

Shamith Kannangara and Kasun Perera both impressed for Moorooduc, scoring half centuries. They got little help from their teammates though, who all ended up out for scores of less than 10.

Kieran Lenehan was impressive with the ball, claiming figures of 4/17 off six overs.

Heatherhill chased down a target of 164 with five balls to spare and four wickets in hand.

At Belvedere Reserve, Seaford Tigers set a target of just 95 for Somerville to chase down.

Somerville won the contest with 5 wickets in hand and 20 overs left to play.

DROMANA scored a hard-fought win over Hastings on Saturday

Batting first, Dromana put 124 runs on the board before their innings expired.  Ben Brittain’s knock of 44 was his side’s best.

The Dromana bowlers would have to work hard to get a result, but they proved they were up to the task.

A middle order stand from Luke Hewitt and Matthew Shean put Hastings in a decent position to win. Once their wickets fell though, the match came to a swift conclusion.

Hastings lost their last seven wickets for just 29 runs, and ended up all out for 91.

Sam Fowler was the pick of the bowlers for Dromana, taking 4/16. It was his best performance for the season.

Delacombe Park celebrated a victory at home on the weekend, getting the better of Pearcedale.

No Pearcedale batsmen could capitalise on good starts to go on to make big scores. They ended up all out for 144, giving their opponents an attainable target to chase down.

They lost a few batsmen along the way, but good performances from Matthew Whelan and Ashley Walker got Delacombe Park the win – with three wickets left to spare.

Carrum secured a thumping victory at home against Crib Point on Saturday.

Openers Shaun Foster and Mark Cooper managed to chase down Crib Point’s total on their own. Both batsmen finished not out as their side chased down 116 to claim a 10 wicket win.

Frankston YCW grabbed a victory against Rosebud at home. They won by five wickets.

TYABB fell agonisingly short of a win against Boneo on Saturday.

Boneo chose to bat first on their home deck, and put on a good show. Opener Chris Jobling spent two hours at the crease and put 78 runs on the board.

Boneo finished their innings at 8/176, giving Tyabb a lot of work to do to get a win.

The Yabbies gave it their best shot, bringing the game right down to the wire. Tyabb’s innings expired with the side at 6/174, just three runs short of victory.

Tootgarook and Balnarring also played each other in a nail-biter on the weekend.

Tootgarook only set their opponents a target of 106 to chase down. Archie Shepherd did damage with the ball, taking 4/24 to help restrict Tootgarook to a low score.

Balnarring’s run chase was unconvincing at times, but they ended getting over the line with two wickets in hand.

Joel’s knock of 60 batting at number eight got his team to 174 at the expiration of their innings.

Seaford’s run chase got off to a nightmare start, with the side in dire straits at 5/37. Ryan McQueen came in and put 41 runs on the board, but he didn’t get much support.

Seaford ended up losing by 59 runs.

At Ferrero Reserve, Rye were rattled by Mt Martha. Rye set their opponents a target of 82 to chase down, which they did without much trouble.

Carrum Downs had a good day against Skye, claiming an eight wicket win.

BAXTER and Mornington’s clash on Saturday turned into a run-fest.

After losing the toss, Baxter was sent in to bat first. They played aggressive cricket at the crease, and ended up putting 219 runs on the scoreboard.

Daniel Warwick and Chris Brittain were both in good form, putting on scores of 64 and 77 respectively.

Faced with a huge mountain to climb, Mornington got to work. Opener Zac Garnet played his part, scoring 81 to get his side in a good position to win.

Although they worked hard they just couldn’t get over the line. Mornington’s innings came to a close after 40 overs with the side 20 runs short of victory.

A half century by Wade Pelzer put Peninsula OB in a good position. They would have to defend a total of 180.

Baden Powell worked hard to get within reach of their target. Batsman Rhys Elmi was in fine form, scoring 80 runs to give his side a chance of winning.

Once Elmi’s wicket fell, disaster struck for Baden Powell. They collapsed from 5/166 to all out for 169.

Sorrento scored a win on Saturday against Mt Eliza.

A knock of 80 by Jedd Falck helped Sorrento to a three wicket victory.

At Lloyd Park, Red Hill got the better of Langwarrin. Simon Dart was the man of the match, scoring 78.