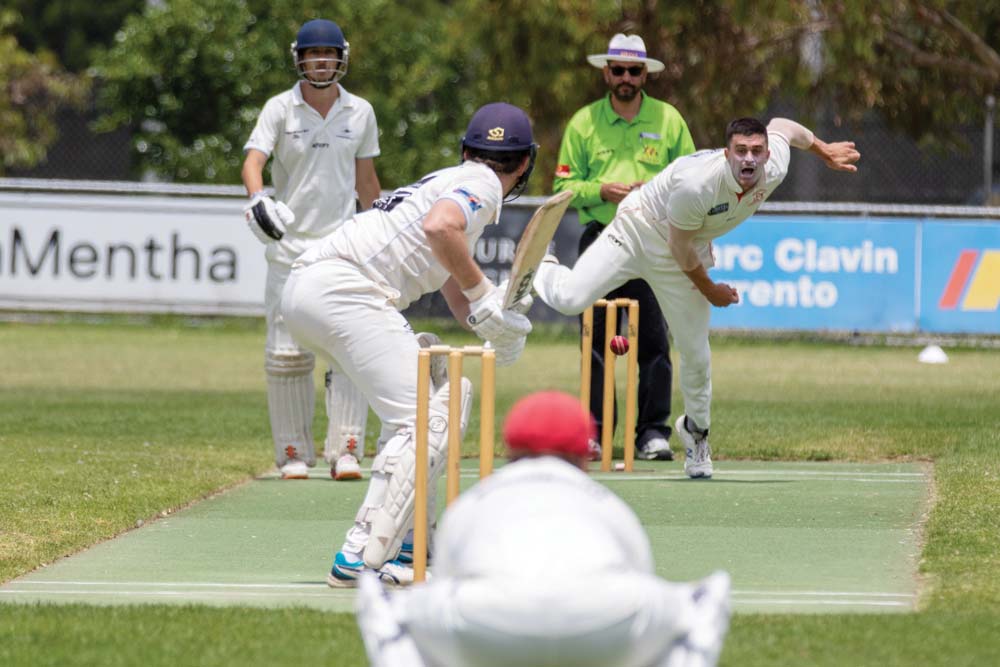 TWO centuries were scored on an entertaining afternoon of cricket at BA Cairns Reserve on Saturday.

Flinders hosted Heatherhill and chose to bat first. Opener Kane Hawkins put on an unbelievable performance, smashing 17 boundaries on his way to a mammoth score of 120 off 83 balls.

Number four batsman Matthew Gale also joined in on the party, scoring 98 runs before being unfortunately dismissed just short of his century.

Flinders’ innings expired with the side at 5/288. Heatherhill would have to climb a huge mountain to get a result.

Heatherhill’s run chase got off to a dream start, with both Don Pulukkuttiarachchi and Jake Williams in fine form.

Pulukkuttiarachchi played a huge part, scoring a century before being run out.

It was a valiant effort, but Heatherhill ended up 14 runs short of a result when stumps was called. Their huge total of 274 wasn’t quite enough to get the win.

At Ballam Park East, Long Island picked up a win against Somerville.

Somerville was sent in to bat first, but didn’t get off to a good start. At 3/27 the side was in a bad position.

Middle order batsmen Justin Allsopp and Ryan McNamara helped to steady the ship and get their side to a final total of 156.

Long Island were able to chase down that target with two overs left to play. Number three batsman Tom Boxell top scored with 61.

Moorooduc wrapped up a win at home by defending a total of 182 against Seaford Tigers. The Tigers lost by 25 runs.

A STRONG showing from Carrum’s top order secured the side a win over Pearcedale on Saturday.

Shaun Foster was Carrum’s best, passing his half century. His side set Pearcedale a target of 188 to chase down.

Pearcedale opener Joshua Swainston offered some resistance with a score of 60, but didn’t get much help from his teammates. Pearcedale scored just 124 from their 40 overs and fell to defeat.

Crib Point played well on their home deck on Saturday to get the better of Hastings.

The visitors chose to bat first but couldn’t do any damage on the scoreboard. Hastings finished at 6/119 off 40 overs.

Crib Point’s run chase started disastrously, with their first three batsmen all sent back to the sheds for single digits.

The middle order got things back on track, giving Crib Point the win with 10 overs left to play.

Dromana bowled out Frankston YCW for just 88 to secure victory in their clash at Dromana Reserve.

Rosebud also got a win on the weekend, defending a small total of 113 by bowling out Delacombe Park for 64.

A LATE collapse nearly cost them the game, but Balnarring still managed to scrape over the line against Skye.

Playing away from home, Skye chose to bat first. None of their batsmen stood up to make a huge score, and they ended up all out for 136.

Both of Balnarring’s openers were clean bowled early, making their run chase more difficult. Their middle order steadied though, and at 6/127 they looked in prime position to win. They quickly lost 3/7, but managed to hit the winning runs with one wicket left to spare.

A mammoth 138 run opening stand between Robert Hearn and Aidan Pateman got Tyabb the win over Rye on Saturday.

Rye were sent in to bat first, and ended up setting their opponents a target of 163 to chase down. Ben Ashworth was by far their best batsman with a score of 82.

Tyabb’s openers came to the crease and played with confidence. Their hot start helped the side claim a seven wicket win with nine overs left in the day.

A 71 run effort from Ryan Jellie helped Boneo secure the points against Seaford.

Boneo chased down 169 runs to win. They lost a couple of wickets early, but that proved nothing more than a bump in the road.

A brilliant knock of 90 off 71 deliveries by James Quarmby was the highlight of the day as Carrum Downs and Mt Martha faced off.

Carrum Downs wrapped up the win early by chasing down a target of 133 with 15 overs left to play.

Ballam Park put a disappointing total on the board against Tootgarook, costing them the game.

PENINSULA OB have maintained their unbeaten start to the season by the skin of their teeth.

Peninsula OB chose to bat first, and set Baxter a target of 141 to chase down. Oscar Craig was their top scorer with a patient 45 off 99 balls.

A late collapse cost Old Boys a chance at a bigger total. They lost their last 5 wickets for just 7 runs.

Baxter chipped away at the total, and at 7/129 looked in prime position to bring OB’s winning run to an end. The tail end couldn’t finish the job though, as Baxter were bowled out for 138. Another four runs would have got them the win.

Two late wickets from Justin Grant helped his side secure the narrow victory.

Mornington put on a big total on Saturday in their clash against Red Hill.

Mornington set their opponents 217 to chase down. Ben Clements and Matt Foon both scored half centuries.

Red Hill worked hard to chase down their target, but couldn’t get the job done. They ended up at 9/176 when stumps was called.

Mt Eliza weren’t able to defend their total of 108 as they took on Baden Powell at Emil Madsen Reserve. Baden Powell ran out victors by four wickets with five overs left to play.

Sorrento’s struggles this season continued on Saturday. They fell to a 110 run defeat at the hands of Langwarrin.