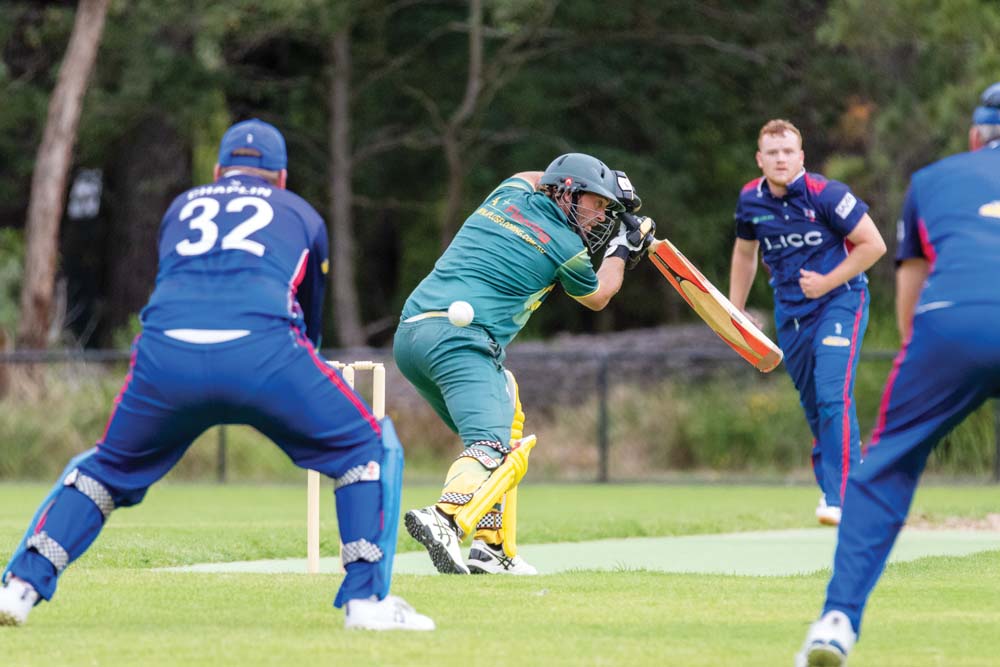 A TAIL order collapse cost Moorooduc a chance at victory on Saturday.

Moorooduc played host to Long Island. The visitors were sent in to bat first and put a good total on the scoreboard.

Brad Bailey was Long Island’s best with the bat with a well-earned half century. His side finished their innings at 6/198.

Moorooduc’s run chase didn’t start as planned. Three of their top order batsmen were dismissed early to leave them struggling at 3/23.

A brave middle order showing from Pathum De Mel, including four sixes, put Moorooduc back in the hunt. They recovered to reach 6/183, but were quickly running out of overs.

Moorooduc lost their last four wickets for just four runs, ending up all out for 187. They finished 11 runs short of the win.

Flinders weren’t able to defend a strong total on Saturday as they took on Pines.

Flinders set Pines 208 runs to win. Matthew Gale and Blake Hogan-Keogh impressed at the crease – a 114 run stand a highlight of the day.

Pines weren’t daunted by the task ahead of them. Damien Lawrence, Billy Humphrey, and Lai Leaunoa each scored over 40 to guide their side to victory.

Pines won with three wickets and three overs to spare.

The Seaford Tigers notched up a three wicket win on Saturday by chasing down Main Ridge’s total of 126.

Somerville also joined the winner’s list with a five wicket victory against Heatherhill.

CARRUM cemented their place at the top of the District table with an impressive win over Rosebud on Saturday.

Carrum made the long road trip up to Olympic Park to tackle Rosebud. Both sides were equal on wins for the season heading into the clash.

Carrum chose to bat first and had mixed fortunes at the crease. Six batsmen of their eight batsmen that went out to the middle were dismissed for single-digit scores.

Luckily for Carrum, Mark Cooper and Jake D’Atri were in good form. They scored 76 and 42 respectively to help their side to a total of 147.

D’Atri wasn’t finished there, and dominated with the ball too. He wiped out Rosebud’s middle order, posting final figures of 5/15 off his eight overs.

Rosebud ended up all out for 93, well and truly short of victory.

A brilliant knock of 88 from Tim Clarke got Delacombe Park the win over Hastings.

Clarke came in as an opener and got his side’s chase off to a dream start. His huge total proved the difference, as Delacombe Park eventually hit the winning runs in the final over with three wickets to spare.

Around the grounds, Dromana bowled out Crib Point for 111 to get the win at home. A half century from Nick Barfuss helped Frankston YCW to a comfortable win over Pearcedale.

BONEO held on to claim a narrow win over Tyabb on Saturday.

Boneo put 172 runs on the scoreboard after batting first. Opener Ryan Jellie was their top scorer with 52 runs.

Tyabb’s run chase looked good early, and at 1/71 they were in the box seat. Momentum then swung towards Boneo, and the scoreboard soon read 5/81.

The middle order and tail end got things back on track, and Tyabb were able to take the game down to the final over. Needing just 5 runs to win, Tyabb lost their final wicket.

Mt Martha were also a winner on Saturday. They took home the points against Rye.

Mt Martha batted first and put together a patient innings. They set Rye a target of 149 to chase down.

None of Rye’s batsmen could capitalise on good starts. At the end of their 40 overs Rye were at 9/121, 28 runs short of victory.

Steve O’Neill was the best performer for Mt Martha with the ball, taking 3/18.

Carrum Downs had a bad day against Skye. They were bowled out for only 76, dooming them to a 52 run loss.

Balnarring got a win on their home deck, defeating Tootgarook.

SORRENTO got the better of Red Hill in a competitive clash last weekend.

The Hillmen were sent in to bat first, and started well. Opener Luke Robertson impressed with a score of 71.

After losing both openers cheaply, first drop batsman Robert Wilson came in to put Sorrento back on track. He smashed 88 runs to put his side in the box seat.

Off the back of Wilson’s hard work, Sorrento went on to grab a three wicket win.

A disastrous tail order performance saw Baxter throw away a brilliant chance to win against Mt Eliza on Saturday.

Baxter bowled brilliantly, and managed to bowl their opponents out for just 90. Adeel Hussain posted his side’s best figures with 3/10.

Needing just 90 to win, Baxter looked to have an easy task ahead of them. They got off to a nervy start though, and lost both openers cheaply.

Things hardly improved from there, and wickets kept on falling. At one stage Baxter lost 4/0.

Baxter were eventually bowled out for just 62, dooming them to a devastating defeat.