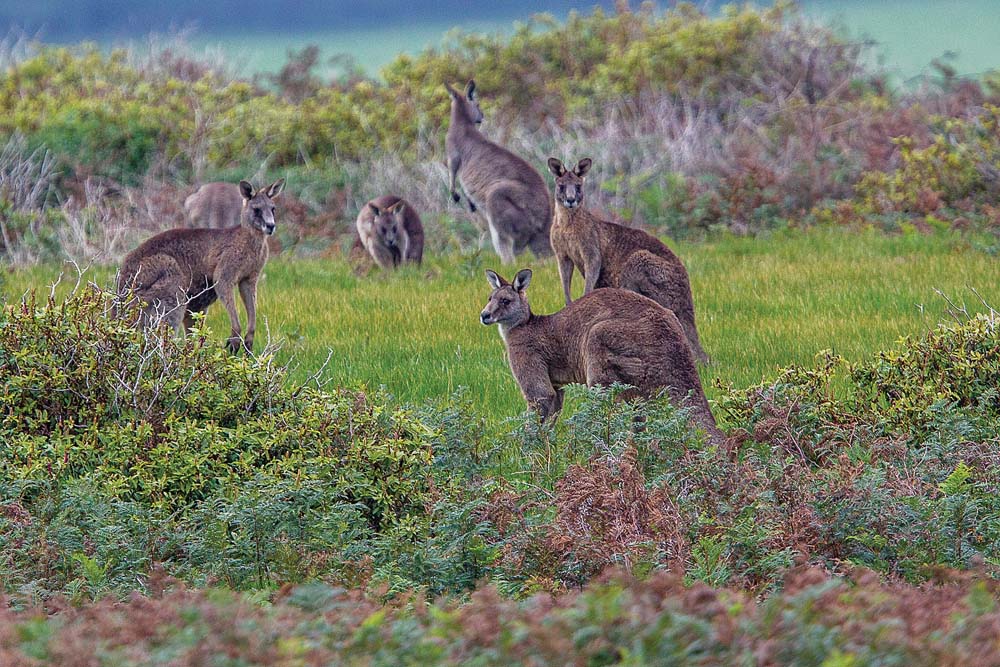 A LACK of scientific evidence has seen all but one of the shire’s 11 councillors decline to call for a ban on the slaughter of kangaroos on the Mornington Peninsula.

Cr David Gill said kangaroo shooting should be stopped because “we don’t know how many there are and how many are being killed”.

His move failed to get the backing of even one councillor and lapsed without a vote being taken at the council’s Tuesday 9 February meeting.

Cr Gill’s motion called for a ban of kangaroos shooting “until scientific research is undertaken justifying the need for this practice and determining the long-term ramifications on our kangaroo population”.

However, his 10 council colleagues appeared to want the scientific evidence before wanting to stop the issuing of licences which property owners to kill kangaroos.

The licences are issued by the Department of Environment, Land, Water and Planning (DELWP) but the information about how many kangaroos are allowed to be killed is only available through a freedom of information (FOI) application.

The peninsula is included in the Gippsland region for the purposes of issuing licences.

Unofficial estimates of the number of kangaroos on the peninsula range from 1500 to 3500.

Chris McEvoy, whose family runs a wedding reception business and grows grapevines on more than 40 hectares at Merricks North,  saw councillors’ reactions to Cr Gill’s concerns as “a joke”.

“I would have thought there wouldn’t be one Australian that doesn’t like a kangaroo – we really have to change the perception they are pests,” he said.

Mr McEvoy said kangaroo habitat on the peninsula was “rapidly shrinking, and so are their numbers”.

He said scientific studies had shown kangaroos did not compete with livestock for grass, or eat crops, or destroy fences “and they only  get caught in poorly maintained fences without access points or when terrorised by shooters or dogs”.

“Studies have shown a cow eats seven times more grass than a kangaroo and generally they are eating different grasses.”

Nathan Stamkos, DELWP’s conservation regulator manager, regulatory operations Port Phillip, said the number of kangaroos available for “harvesting” varied each from region to region “based on environmental conditions, such as rainfall and the availability of food”.

The decision was made by DELWP scientists after annual aerial surveys and information such as rainfall data, the age and sex ratio of the animals and how far grey kangaroos move around the landscape, to ensure the population remains sustainable.

The DELWP would not provide The Times with details of how many kangaroos were living on the peninsula or how many were allowed to be killed each year.

“The number of kangaroos controlled through the commercial harvesting program and the ATCW system is closely monitored throughout the year to ensure it remains sustainable. Harvesting may be suspended or closed if numbers taken approach the total allocation, or other events, such as bushfires, threaten kangaroos,” Mr Stamkos said.

Before Cr Gill’s motion to ban kangaroo shooting on the peninsula lapsed through want of a seconder, he said spotlight shooters were killing kangaroos from a distance.

He knew of one farmer who said kangaroos had an impact on his property, while another had told him about a mother kangaroo and two joeys being shot.

Cr Anthony Marsh wanted to know if Cr Gill knew what “impact” a shooting ban would have, while Cr Sarah Race asked how long Cr Gill had “known about this issue”.

Cr Gill said he was a “third generation” peninsula resident and had known about kangaroos being killed “since I was a baby … it’s always been an issue”.

Cr Race then stated that Cr Gill did not have “much information to go on” and wanted to know if he had lobbied MPs or sought details through FOI.