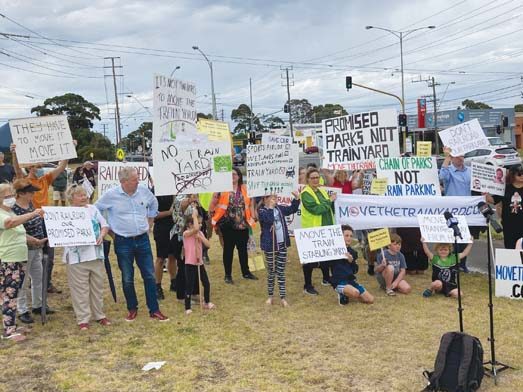 PROTESTERS have turned up in numbers to oppose state government plans to put train stabling on a former landfill site in Heatherton.

In late 2020, the state government confirmed that the former Delta site in Heatherton was its preferred location for suburban rail loop stabling yards. The move was slammed by Kingston Council, which had eyed off the land for a new regional sporting facility (“Train stabling decision devastated community”, The News, 3/2/21).

Protesters visited Heatherton on Saturday to voice their opposition to the plans. Heatherton Residents Against Inappropriate Development Inc president Andrew Dawson said “as a Heatherton resident of some 25 years, I have fought to protect this area from inappropriate and intrusive proposals that would ruin the enjoyment of our peaceful amenity and forever break the link in the decades long promised Chain of Parks.”

“I ask that everyone help us in our fight to protect our families, our quality of life and the Chain of Parks by sending the state government one simple and clear message. Move the train yard.”

The Chain of Parks is a plan to convert former landfill sites in the Kingston municipality into a series of linked parks. The state government promised funding to the project at the last state election.

Suburban rail loop minister Jacinta Allan said “we’ll be preserving the neighbouring Kingston Linear and Henry Street Reserves and will work with the local council to ensure the Chain of Parks will be delivered for this community.”

“You can’t build a turn-up-and-go rail network through Melbourne’s middle suburbs, without a facility nearby to service and clean the fleet of trains,” she said. “This is the best location for the suburban rail loop train stabling, minimising compulsory acquisition of homes, businesses and parkland – and it will deliver more than 200 local jobs.”

When completed, the 90-kilometre suburban rail loop is expected to link every major rail line from Frankston  to Werribee.

An e-petition has been circulating requesting “that the Legislative Council call on the government to be transparent in the decision-making process for the proposed train stabling site in Heatherton, to take into consideration the wishes of the City of Kingston residents and find an alternative location for the train stabling site, even if it is more costly.” The petition has recieved more than 1000 signatures.

Heatherton resident Michelle Hornstein said she was “devastated about this proposal and I despair at the thought of the drilling, tunnelling and compaction that will all happen just metres from my home, on land long promised as Green Wedge parkland.”

“I moved to Heatherton for the quiet semi-rural feel of the area, but am now facing the prospect of living right beside a noisy and dusty construction site for years, with vibrations from site preparation works potentially damaging my home, and then an industrial site once the train facility is built.  There will be permanent noise, light, and rumbling from trains in the tunnels right underneath our home, not to mention the constant tooting of trains as they pass through the site at ground level,” she said.

The “Stage One alignment” of the suburban rail loop, including the proposed stabling at Heatherton, is subject to an Environment Effects Statement process. The Stage One area does not include the Kingston Heath Golf Club, which is not expected to be impacted by land acquisition.