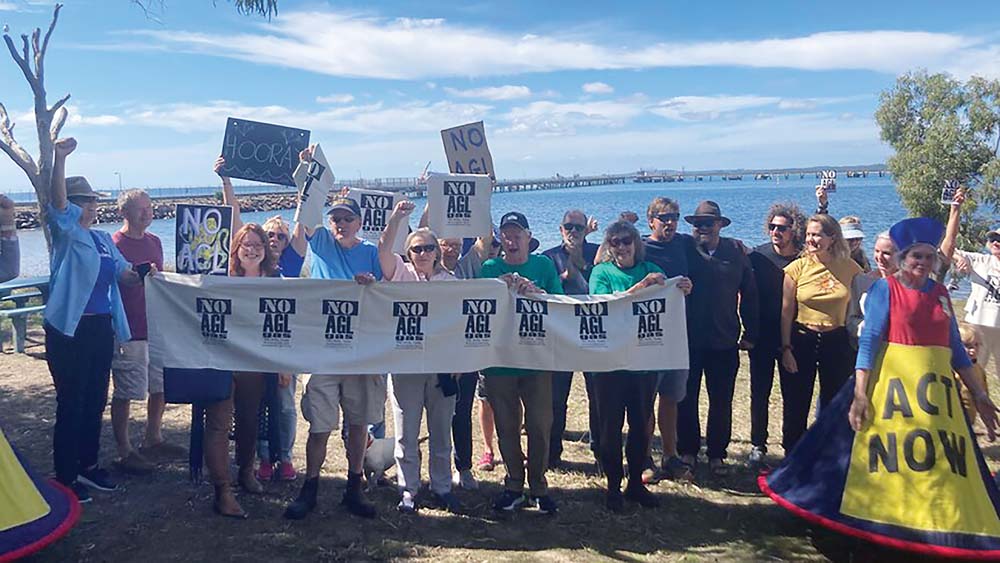 IMPROMPTU it may have been, but there was no suppressing the joy felt by members of the anti-AGL forces after they heard about the government’s refusal of a gas import terminal at Crib Point.
Share
Facebook Twitter LinkedIn Pinterest Email

THE state government has knocked back power company AGL’s plans for a gas import terminal at Crib Point.

Planning Minister Richard Wynne said the project, which also included a 55 kilometre gas pipeline to Pakenham, was refused because of the “unacceptable effects” it would have on Western Port’s environment.

In a statement on Tuesday 30 March Mr Wynne said his decision was based on a review of AGL’s environmental effects statement, which attracted more than 6000 submissions and encouraged protests either organised by or attended by community group Save Westernport, Environment Victoria, Mornington Peninsula Shire and the state opposition.

“It’s very clear to me that this project would cause unacceptable impacts on the Western Port environment and the Ramsar wetlands – it’s important that these areas are protected,” Mr Wynne said.

AGL said it was “reviewing and considering its position” following Mr Wynne’s decision and would provide an “update” on its “impact on the project”.

The AGL statement authorised by its market disclosure committee said about $130 million had been “committed or incurred” on the project, or about $28m more than stated to the Australian stock exchange in June 2018.

Jane Carnegie, of Save Westernport, said “science and good sense has won out … The government has listened to us and to the thousands of people in our community who have worked tirelessly to save our beautiful environment from a potential catastrophe,” she said.

“Western Port was never the place for such a monstrous, environmentally damaging project.

“AGL’s idea for a floating, hazardous gas factory in an internationally significant wetland should never have made it off the drawing board, let alone taken three years of relentless community opposition to save a bay that belongs to all Victorians.”

“The Andrews Labor Government has been dragged kicking and screaming to make this decision,” Mr Davis said.

Hastings MP Neale Burgess said that “due to public pressure the government has now followed [the Liberals lead]”.

“My community has been telling the Andrews Labor government for years that we do not want this project. I’m very proud to have worked with my local community to secure this great outcome,” he said.

Flinders Liberal MP Greg Hunt credited “the work of Save Westernport, the Mornington Peninsula Shire, Neale Burgess MP and others in the local community” for Mr Wynne’s decision.

“Throughout this fight, I have been clearly, absolutely, unequivocally opposed to the AGL gas plant in Westernport,” Mr Hunt said.

“This project was always a solution to a problem of the Andrews government’s own making, thanks to their now cancelled moratorium on local conventional gas exploration, and I’m pleased they have listened to the peninsula’s strong objection to this proposal.”

Nepean Labor MP Chris Brayne said he had always lived on the peninsula and saw the decision against AGL as “a victory for a committed, environmentally passionate community who have stood up and fought for years now to protect the beautiful environment and pristine bay that we call home”.

“Every step of the way, I listened to the community and I relayed the community’s feedback to [Mr Wynne],” he said. “[The] decision is the result of that strong local voice.”