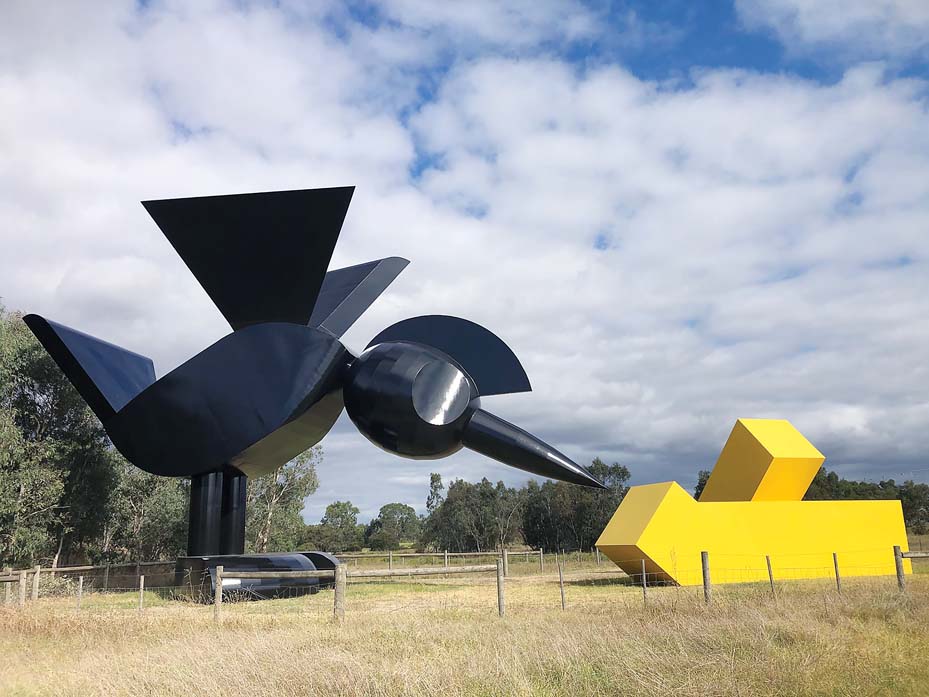 THREE of the most recognisable artworks along the 39 kilometres of the EastLink tollway have been renovated and restored.

The collection of public artworks includes 12 artworks along the tollway and shared use path.

“EastLink’s much-loved art collection cost $5 million when the artworks were commissioned and acquired shortly before EastLink opened in 2008, so it’s important they are maintained properly,” The company’s corporate affairs manager Doug Spencer-Roy said.

“Three of the artworks needed maintenance recently, and with renovation works now complete, they are as good as new,” he said.

Public Art Strategy, by Melbourne-based artist Emily Floyd, had some rust damage and patchy paintwork. The 13 metre tall black bird, which is contemplating a yellow worm, required 50 litres of black paint and 25 litres of yellow paint.

Ellipsoidal Freeway Sculpture, by James Angus, was damaged in October 2018 by a runaway trailer carrying a small excavator. The paintwork of this 30 metre long artwork, called The Smarties by EastLink personnel, had also faded. Mr Spencer-Roy said the runaway trailer destroyed one of the 24 fibreglass ellipsoids and badly damaged another. The trailer operator’s insurance enabled EastLink to make and two replacement ellipsoids. Ellipsoidal Freeway Sculpture was also repainted to ensure the two new pieces colour-matched the originals.

Red Rings, by the late Inge King – a pioneer of contemporary sculpture – had faded paintwork, becoming a paler shade of its former self.

The repainting of Red Rings’ three 2.5 metre diameter steel rings was completed shortly before the COVID pandemic. The artwork’s red colour contrasts with the green landscaping, “expressing the strength and tension that is the motivating force behind it”.

“We will continue to look after the artworks on behalf of the community, in the same way as we look after the road, tunnels, bridges, landscaping, wetlands, and other EastLink assets,” Mr Spencer-Roy said.

Details about the tollway art, including a downloadable booklet with a map, is available on the EastLink website.

Mop up after mixer flips