You can’t keep a champ down 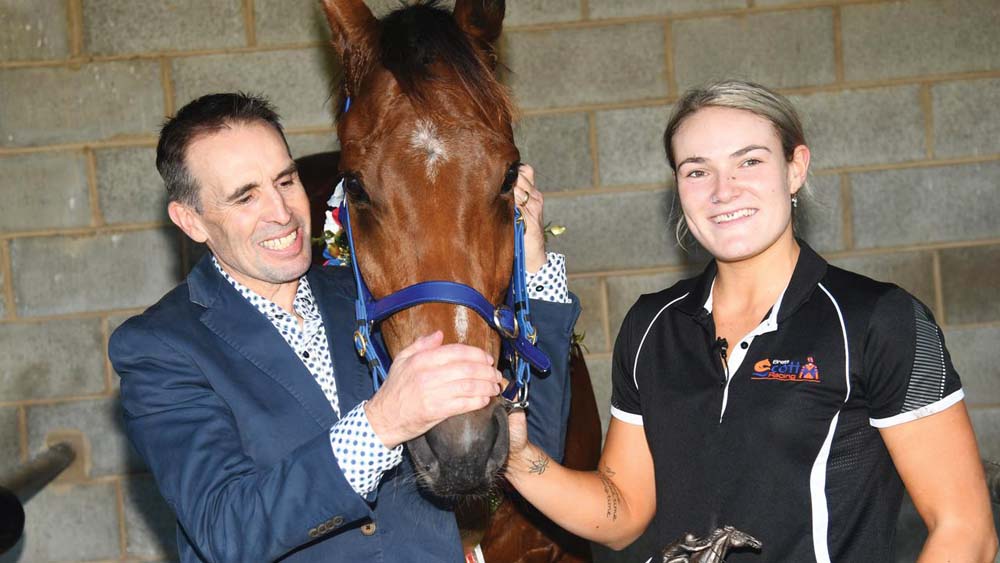 MORNINGTON-based trainer Brett Scott landed one of the most memorable wins of the Warrnambool May Carnival having taken out the elusive Galleywood Hurdle (3200m) just five weeks after being released from hospital.

Scott was immediately flooded with congratulatory cheers following the tenacious win of his promising jumper The Statesman, ridden by another Mornington-based jockey Will Gordon, in one of the carnival’s feature jumps races on Wednesday 5 May.

Scott, a four-time Grand Annual Steeplechase-winning jockey, had overcome life-threatening injuries after being kicked in the head by a horse at his Mornington property just two months earlier.

Scott said to just be at the Warrnambool Carnival was a thrill in itself, let alone win one of the feature contests.

“Just walking around and talking to people I’ve known for years and then to have this horse actually give us a reason to celebrate is just great. I’m just so happy to be here again,” Scott said post-race.

Despite being a prominent jumps rider in Victoria for more than a decade, the Galleywood Hurdle always seemed to evade Scott during his riding career having finished second in the race on two occasions. A feat that he has now ticked off as a trainer.

“Will Gordon has done something I couldn’t do,” Scott quipped following the victory.

Jockey Will Gordon gave the seven-year-old gelding a terrific ground-saving ride, ducking up the inside of the field at the final hurdle before kicking clear to win the Galleywood by a comfortable three-length margin.

“I just wanted to win it more for [Brett] Scotty and the family than anything,” Gordon said.

“They’ve obviously been through a tough time recently. It’s just a massive credit to the whole family. Scotty for bouncing back, Kylie for picking up the pieces, Tylah and everyone back at home that’s been supporting them – it’s unbelievable.

“Scotty being the true champ he is said ‘you just do what you want mate’. It’s my second feature race but this one is up there at the top.”

The Yulong Investments-owned jumper will now head to Sandown for his next start in the Australian Hurdle (3900m).

Kangaroos pick up where they left off