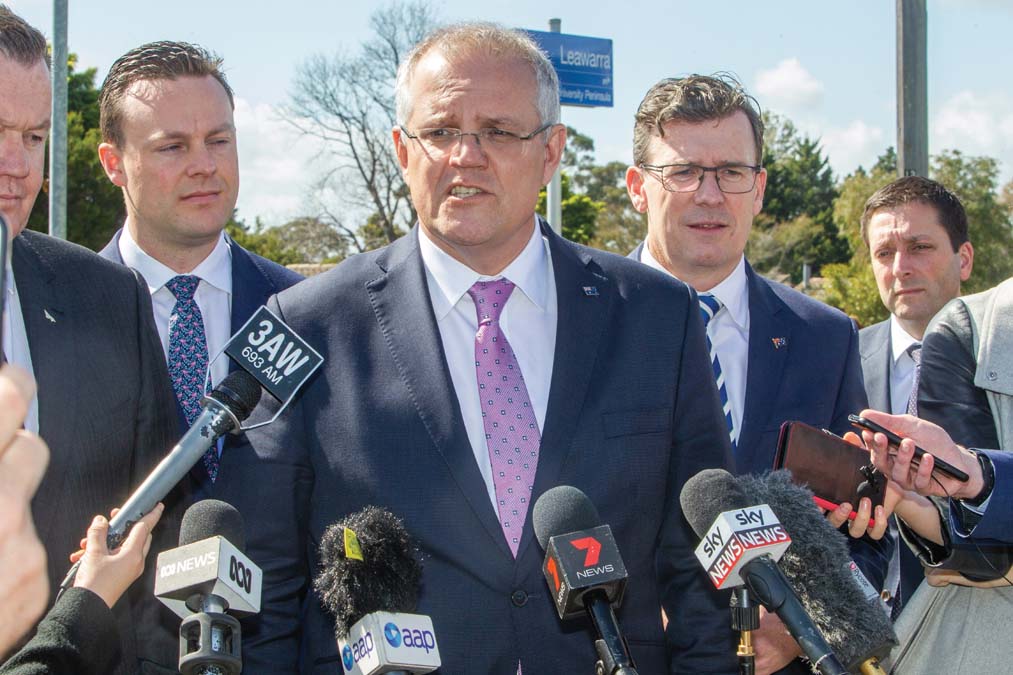 PRIME Minister Scott Morrison visited Leawarra station in 2018 to commit funding for the extension of the Frankston line. Since then no more money has been put into the project, and car parking promises on the line have gone unfulfilled. Picture: Gary Sissons
Share
Facebook Twitter LinkedIn Pinterest Email

PLANS to build more car parking at Seaford and Kananook stations have been scrapped.

The Liberal government pledged funding to build extra car parks at the Frankston line stations in the leadup to the last federal election.  Funding for Frankston Station car parking was topped up in the federal budget for 2021/2022, but funding for Seaford and Kananook stations was absent.

The Times sent questions to the office of urban infrastructure minister Paul Fletcher asking why the project was abandoned. A spokesperson for the minister responded “based on advice from the Victorian government and local councils, the Commonwealth has withdrawn funding from a small number of projects where the Victorian government or relevant local council has advised that the project cannot be delivered with the funding committed or where there was no feasible site or design options. This includes the Seaford and Kananook commuter carparks.”

“The funding that had been committed for both Seaford and Kananook commuter carparks specifically will be redirected to the construction of an alternative carpark along the same rail line following advice from both the local and state governments.

“Should the Victorian government or local council come back with an amended proposal for the projects, the minister stands ready to discuss it. For example, Frankston City Council has advised the Commonwealth in the last week that, following recent council elections, it has changed its position and is no longer opposed to carparks at Kananook and Seaford.”

“The promised 100 space commuter carparks at both Seaford and Kananook train stations have been scrapped by the Morrison government,” she said. “It just shows that it was an announcement without any consultation or plan for delivery.

“It isn’t good enough for Scott Morrison to constantly make announcements and then not deliver. Announcements are just political set pieces, delivery is all that matters. The Morrison government owes our community an apology.”

In a statement on social media, Frankston mayor Kris Bolam said he held out hope that a solution could be reached. He travelled with council CEO Phil Cantillon to meet with ministers earlier this month.

“While council is pleased to see enhanced car parking at Frankston Station reflected in the budget, we will continue to work with and advocate to the federal government to see if a solution can be delivered at Kananook and Seaford,” Cr Bolam said.

“It is my hope that all seven hundred car parks can be delivered as per the coalition’s 2019 commitment – and if council has to use its land holdings to get the remaining car parks for Seaford and Kananook railway stations over the line, so be it.”

In February this year a spokesperson for the Department of Infrastructure, Transport, Regional Development, and Communications told The Times that “the commuter car park upgrades at Frankston, Kananook and Seaford railway stations are currently in the planning stage with consultation between the Australian and Victorian governments and Frankston City Council ongoing. All projects vary in complexity and are required to go through appropriate planning before construction can start.”

Senator David Van said “with more people returning to public transport, the network needs to be ready to meet future demand. The federal government is ensuring locals can get to work and home sooner and safer.”

The pledged funding remains well short of what would be needed to actually complete the project.  A business case estimated the cost of electrifying the Frankston line to Baxter at between $1.3 and $1.5 billion (“Business case casts doubt on rail extension”, The Times, 19/11/20). The state government has not made a funding commitment to the project.