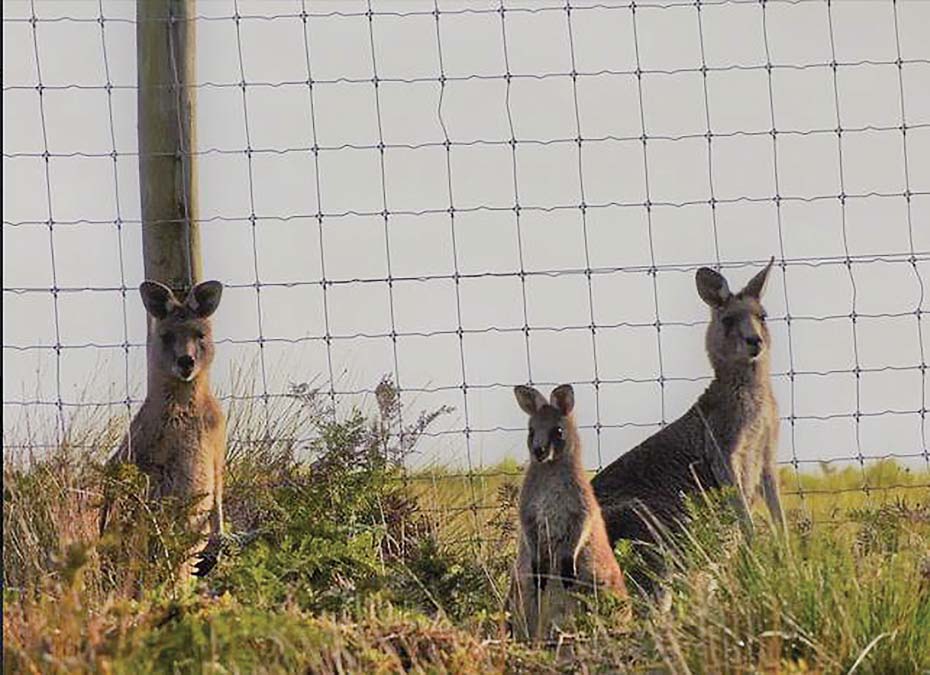 WILDLIFE groups are frantically seeking to save a large mob of kangaroos from being slaughtered on a Cape Schanck property.

Members of Mornington Peninsula Wildlife Action Group said the kangaroos appeared to be trapped behind wildlife exclusion fencing along all boundaries of the 70-hectare property on Patterson Road.

They said up to 200 animals could not escape back to neighbouring Greens Bush wildlife reserve “even if they wanted to”.

The group said neighbouring landholders had told them a kangaroo cull took place on the property last year and “their concern is another cull is imminent”.

Neighbours had said no other farming activities have taken place there for 10 years, which meant the kangaroos were not competing with farm animals for feed or damaging fences or equipment.

The fencing was erected several years ago and a large gap through which the kangaroos entered the property had been sealed.

The Department of Environment Land Water and Planning was notified of the concerns of Wildlife Victoria and neighbours but refuses to respond publicly, saying wildlife control permits issued for the cull are a matter between it and the applicant.

Neither the owner or the property manager could be contacted for comment last week.

The wildlife groups believe the issuing of the permit breaches DELWP guidelines and the Wildlife Act 1975 concerning entrapment and culling of trapped wildlife.

DELWP’s guidelines allow for permits to cull wildlife damaging buildings, pasture, crops or other property; posing a risk to human health and safety; or impacting on biodiversity.

Guidelines also state: “A [permit] for lethal control will only be issued if the DELWP officer is satisfied that it is necessary to manage the problem and that all practical non-lethal control options have been trialled.”

The purpose of the Wildlife Act 1975 is to “establish procedures in order to promote … the protection and conservation of wildlife”.

There is also an ongoing dispute over the number of kangaroos on the peninsula. Wildlife groups believe their numbers are far fewer than DELWP estimates, making a culling of this size a threat to their sustainability.

Mornington Peninsula Wildlife Action Group says  preventing eastern grey kangaroos, a protected species, from moving freely across the landscape and excluding them from their natural habitat, including the adjoining national park, represents a “major disturbance to these macropods on the peninsula”.

The group wants DELWP to “investigate the issue … as a matter of urgency” and revoke any permits if necessary.

Australian Wildlife Protection Council president Peter Hylands has called on Environment Minister Lily D’Ambrosio to immediately cancel the kangaroo cull permits, which he labelled “terrible and extremely cruel behaviours” and to “order the [kangaroos’] release back to the adjacent park without further harm or distress”.

DELWP last week issued a statement “for background only” saying: “If kangaroos are negatively impacting crops, pasture or infrastructure, such as fencing, land managers can apply for an Authority to Control Wildlife [to cull them] but added: “It is conservation regulator policy that a land manager exhaust all practical non-lethal control options before applying for an ATCW for lethal control, which is a last resort.”