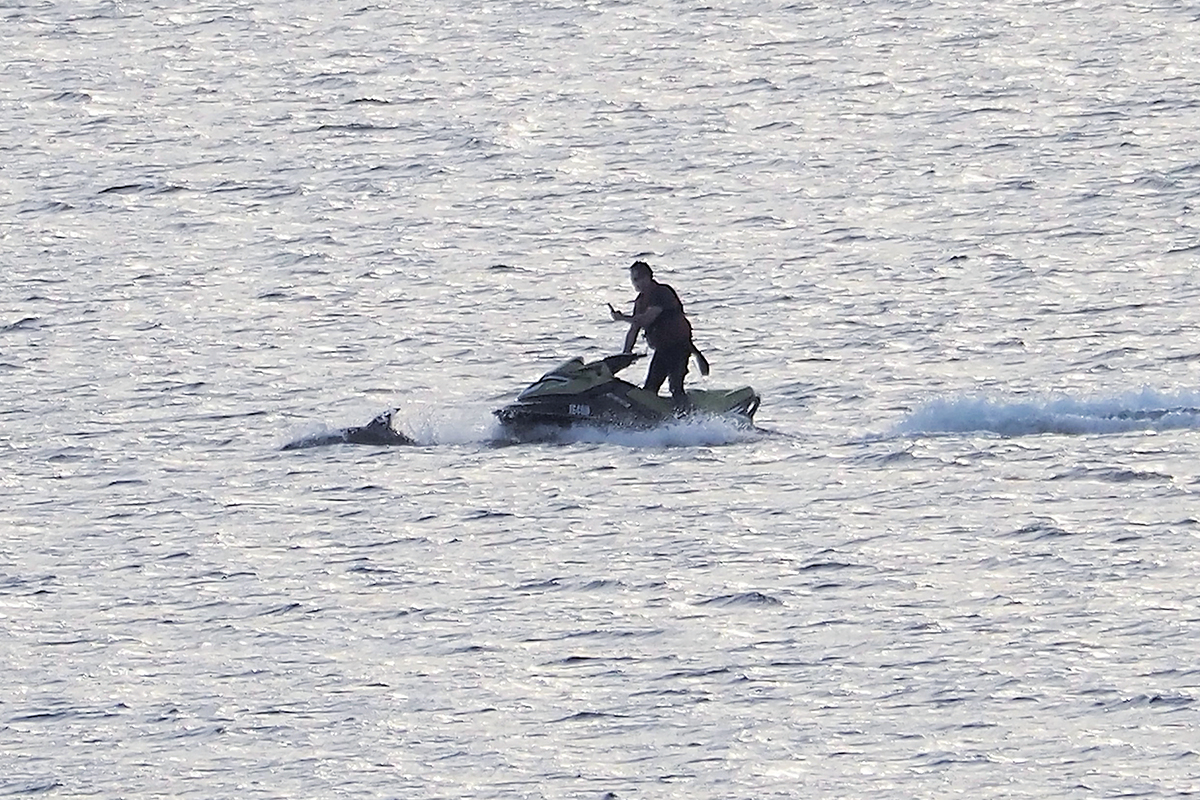 POLICE have been given details of a jet-ski rider using a mobile to record chasing down a dolphin in the bay off Mornington.

Unknown to the jet -ski rider one of the Dolphin Research Institute’s dolphin watchers was watching from the cliffs off the Esplanade near the Royal Hotel.

The volunteer took photos of the jet-ski both in the water and later when it was loaded on a trailer at the Fishermans Beach boat ramp.

The incident happened about 5.15pm on Tuesday 28 September. Regulations stipulate that jet-skis must stay at least 300 metres away from dolphins.

The DRI volunteer said the dolphin was part of a pod regularly recorded off beaches between Olivers Hill, Frankston and McCrae.

“They are a precious group which occasionally have calves with them,” the volunteer said.

“I felt angry seeing the offender chasing down one dolphin in particular. Large splashes from the dolphin would indicate it was moving quickly as it tried to escape. “At one stage the dolphin disappeared, the offender stopping and looking about to then take off at speed again when he spotted the dolphin.

“He was standing up, hand outstretched, taking photos or videos, almost running over the dolphin.”

After the jet-ski moved towards the boat ramp the dolphins continued moving out to deeper water.

“Were they feeding before he appeared? Do they have calves? These intelligent creatures were certainly stressed at being run down by the fast-moving jet-ski. This type of harassment may cause this dolphin pod to move on.

“This is not an isolated incident. Surely, it’s time we all do our best to ensure the safety of our dolphins. What a sad day it would be if they left the area.”

DRI executive director Jeff Weir said the dolphin pictured in front of the jet ski was part “of a small, unique community that resides between Oliver’s Hill [Frankston] and Dromana”.

“Pursuing dolphins in or on vessels can cause disruption to important natural behaviours such as feeding, socialising, nursing and mating and could have long-lasting effects,” Mr Weir said.

“The common dolphin community in this area are unique globally and are particularly vulnerable to disturbance given their small home range.

“Our situation in Port Phillip is quite remarkable with common dolphins, a normally oceanic species, coming to live in our bay with the bottlenose dolphins. It’s remarkable because resident dolphins in many places globally, and in Australia, are struggling to survive in their polluted coastal environments. We must protect what we have.”

Mr Weir said members of the public were “vigilant in keeping records and reporting concerns” when they see dolphins being disturbed.

The DRI has introduced a Dolphin Distancing program to encourage boat and jet ski owners to follow the rules. Details: dolphinresearch.org.au

Reports of dolphins being harassed can be made to DELWP on 136 186 or to crimestoppersvic.com.au.