Barber bounces back at ‘Somie’ 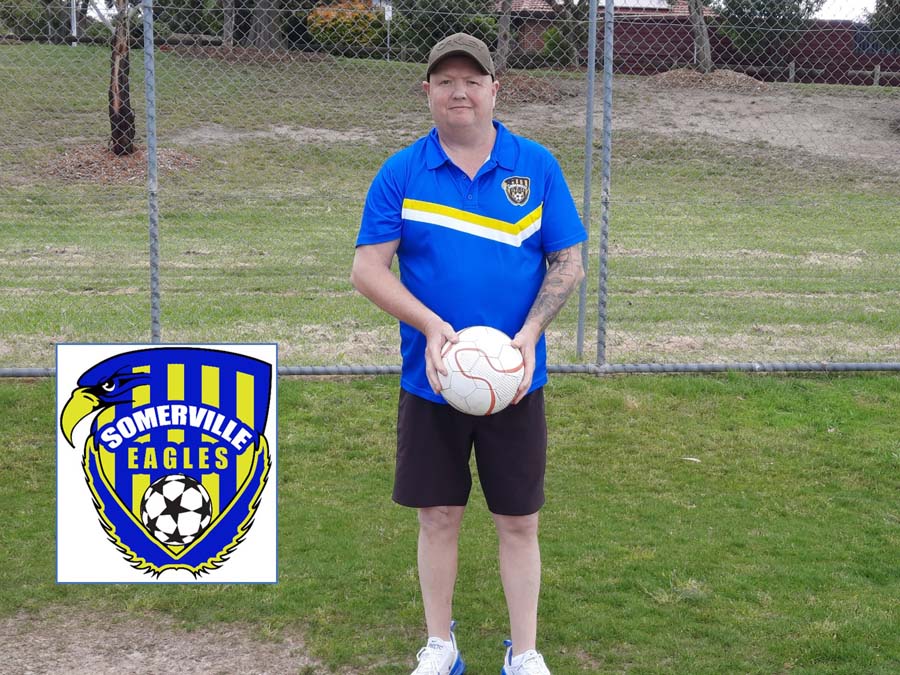 Barber was completely blindsided by the move.

“I wanted to stay but I got an email from the president saying they wanted to go in a different coaching direction and good luck on your travels sort of thing,” Barber said.

“Look the coaches they’ve got there now had the reserves last season so as far as I’m concerned it’s just bullshit.

“I didn’t even respond to the email. I just got on with it.”

On 9 October Aspendale announced that its senior coaching appointment process that started in late September had been completed and that Gregor Macnab and Tony Guedes had been appointed for next season.

But the 48-year-old didn’t take long to recover from that setback and on 11 October he was named as Somerville Eagles’ head coach for 2022.

It’s fair to say that the 48-year-old’s senior coaching career has been tumultuous.

It started in late 2018 when he was appointed to the top job at Hampton Park United but a few weeks later a club upheaval tipped out the committee that had chosen him and he was collateral damage.

He successfully applied for the Aspendale job and took charge for the 2019 State 5 season.

He signed five players from Berwick City where he had been coaching the reserves and the side finished seventh, one place higher than its inaugural State League season in 2018 but significantly it had amassed 11 more points and a 22-goal better goal difference.

Fast forward to this year’s part season and when Football Victoria was forced to call a halt to proceedings Aspendale had developed into a promotion challenger lying in fourth spot with two games in hand on the teams above it.

“The boys that came over from Berwick really strengthened the squad and people saw what Aspendale was like – the players wanted to play football and that’s what I want to do at Somerville.

“I’ll definitely be implementing a different game plan as apparently last year there was a lot of focus on just kicking the ball to Dave Greening which is not great if you’re a midfielder because you’re not getting involved enough.”

It was Greening who first contacted Barber about the Somerville job.

“Dave’s busy at the moment right up to Christmas but he should be back after the New Year.

“He said he still had plenty to offer and of course he does so he knows I want him to come down and play for Somerville.”

Barber has no plans for a major squad upheaval and is confident about the club’s prospects.

“The squad I looked at on paper looked to be pretty solid.

“We’ve had a couple of sessions already and there are a few players who were tied up but they’ve said they’ll be back.

“The committee tells me there are some good junior players coming through so I think we’ll have a kind of 70/30 mix where you’ve got a lot of experienced players and you bring in a bit of youth.

“You don’t want to just play all the experienced blokes because two years later you’ll have no-one.”

When the 2021 season was cancelled Somerville was second bottom in State 4 South with five points from 12 games and Barber knows he’ll have to improve on that markedly.

“In the short term we’re definitely looking to do better than we did last season.

“I’ve watched a fair bit of State 4 as Endeavour (United) is just around the corner from my house so I know what the standard is like.”

He doesn’t want to be a one-year wonder at Somerville and wants to be part of the club’s progress.

“Somerville deserves the chance to build on what it did in 2019 (when it won State 5) and that’s what I’ll be aiming to do.”

His efforts as senior coach will be scrutinised by a club committee now led by Zach Peddersen who took over from Lee Mulder at last week’s AGM.

Mulder had taken over as caretaker president in 2018 and had been in charge ever since.

“I stood down as I believe a president shouldn’t stay in the role too long,” he said.

“I think a changeover is good as fresh ideas can be implemented.

“I love the Eagles and the people there are like family to me so I’m looking forward to being able to just enjoy watching the games and I’m sure most people who have had that role would understand.”

He’s hoping Barber’s side will provide him with much viewing enjoyment in 2022.

Meanwhile the Wallace Cup will return to its original home at Lawton Park.

The 10th staging of the annual charity event will be held on Saturday 22 January and the clubs who have accepted an invitation to compete are Langwarrin, Mornington, Peninsula Strikers, Skye United, Frankston Pines, Baxter, Seaford United, Somerville Eagles, Rosebud and Mount Martha.

In other news hot on the heels of losing Aaran Currie to Casey Comets, Peninsula Strikers are bracing themselves for another hit to their attacking ranks as Ben Doree is training with a club closer to his Altona home.

New Strikers coach Donn Delaney starts pre-season training this week and there may be a few newcomers who have been involved in NPL programs.

“Our story will be that if you commit to us then we will commit to you and our aim will always be to help players achieve their potential,” Delaney said.

“Once the squad is locked in the focus will be on developing the group we have.

“I do not want players looking over their shoulder thinking I’m looking to upgrade them.”