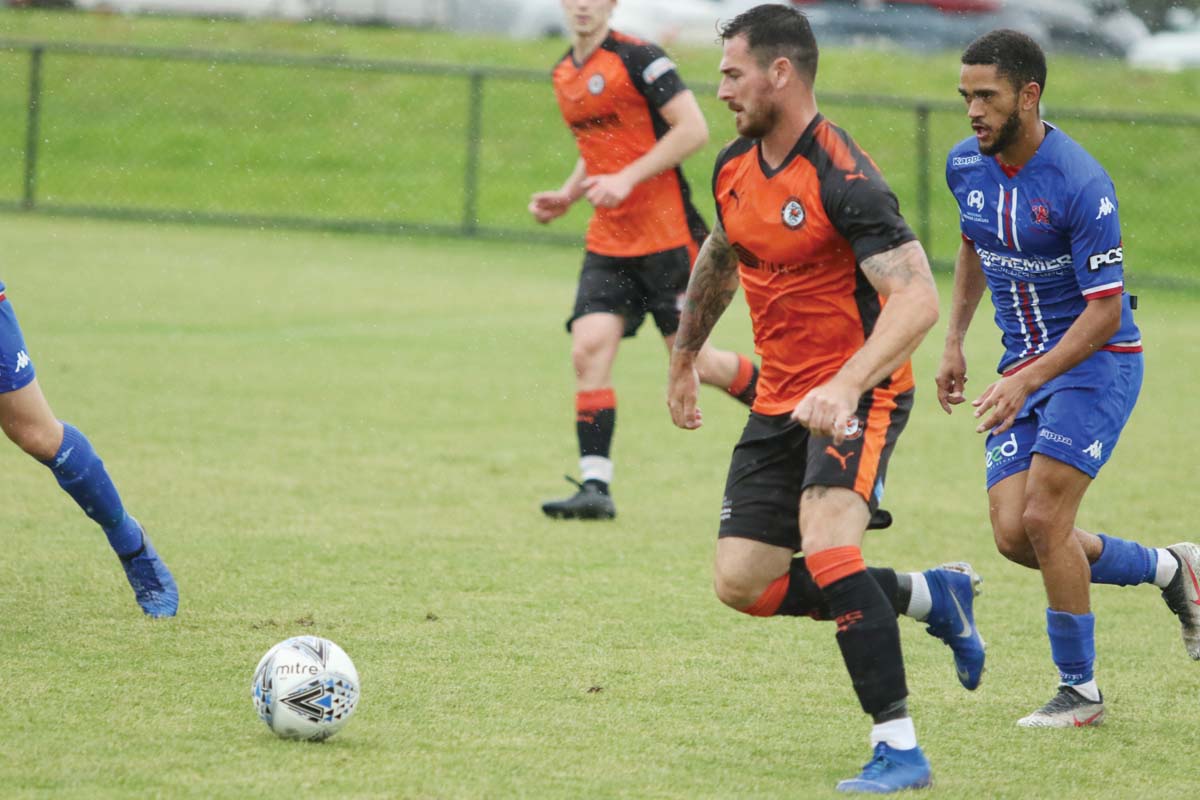 JOSH Hine’s nightmare may be over.

Fatherhood, football and a positive prognosis are the keys to unlock the door and walk free of the personal hell he has endured for most of 2020 and throughout 2021.

There’s a baby on the way (his partner is due in May) and his surgeon has told the 30-year-old that he’ll be able to play soccer again.

That news was a godsend for the star Mornington striker who continues to battle a soul-destroying legacy from a road accident when cycling last year.

“I’ve had at least five surgeries since then,” Hine said.

Initially he suffered a dislocated elbow and minor fractures when knocked off his bike on 27 April.

“The first operation didn’t work, the second one got infected, the third was for a washout and clean then I needed a biopsy then another surgery which failed and the infection was still there.

“I went back in about six weeks ago to have stitches and ligament and tendons treated then last Wednesday I had to have another washout and have more samples taken for pathology to see if the infection has gone.

“I should get the results back within 14 days because it usually takes 10 to 12 days for the infection to grow again if it does start to grow.

“I’ve been on antibiotics for months and months now.”

“My surgeon is happy for me to play again mainly for my mental health because my whole life has been built around sport.

“The last 18 months have been horrendous for me.

“Sure, you put on a happy face and we do live in a beautiful place but for me personally it’s been hell.

“The surgeon’s told me that I’ll have to be careful though and not be as much of an idiot as I used to be but to be told I can get back into it virtually straight away means the world to me.”

Hine loves cycling and had planned to do another triathlon but doesn’t think he’ll be able to combine that and what’s required in preparation while also preparing to spearhead Mornington’s assault on the State 1 championship.

“With my arm the way it is I don’t think I could possibly do both.”

And he thinks it could be a special year for the Seagulls.

“We’ve put together a good squad again this year.

“No-one really has seen just how good the other Josh (Heaton) is yet and I probably had the worst season of my career last season.

“I think we all have a point to prove.

“People expect us to go out and buy the league but we haven’t gone out and spent money on new players and we’re trying to bring the youth through too.

“We don’t worry about what other clubs do and that’s something that’s been bred into us.

“We all believe in ourselves and what we’re trying to do.”

He had to settle for joining a large group of onlookers at Dallas Brooks Park as the minnows from the peninsula gave a good account of themselves going down 3-0 to the reigning A-League champion.

“I was gutted when Adam rang and it was just typical of my luck.

“It would have been great to play against them, to judge the standard and to get in the dressing room and chat to the boys about the things you have to look at if you want to be a professional.”

He was the youngest player to make his senior debut when he played for hometown club Southport as a 15-year-old and his résumé before coming to Australia in the back half of the 2018 season included spells at Skelmersdale United, Chorley, Warrington Town and Salford City.

Life in Melbourne held few surprises for Hine who had spent 10 months here in 2010 playing for Ashwood in another sport he loves, cricket.

When he finally arrived at Dallas Brooks (after an immigration department hiccup two years earlier) it was a contact of former Mornington keeper Kris McEvoy that helped engineer the deal.

In August next year Hine can apply for permanent residency so 2022 could be a landmark year in the Englishman’s life.

“I guess I’ve got a lot to look forward to next year with a little baby on the way and being able to play again means so much to me.

“I love playing football and as long as I’m careful at training I’m planning, well I’m hoping, not to have to miss a single game next season.”

In State 2 news Oscar Marsden has returned to Peninsula Strikers after a stint at Berwick City.

“He’s a big signing for us and I’m delighted to have him on board,” Strikers coach Donn Delaney said.

“A few more names are on the horizon but not locked in yet.”

Callum Batey from Beaumaris, Logan Johnstone from Berwick and Keegan Grealy (ex-Box Hill and Doncaster Rovers) are training at Pines.

Former Suva, Labasi and Lami midfielder and Fiji international Nickel Chand will move from South Australia in the New Year and is expected to sign with Pines.

Max Boulton is planning on travelling, Kevin Brown is taking a year off, Lewis Coyle has moved to Shepparton, Kameel Khan has gone to Langwarrin’s under-20s, Rohan Kumar is training at Peninsula Strikers, star midfielder Savenaca Baledrokadroka is trialling at Doveton, goalkeeper Asaeli Batikasa is recovering from a knee injury while striker Tito Vodawaqa and defender Penni Tuigulagula are trialling at Springvale White Eagles.

Hayden Taylor is coaching the reserves again and has also replaced Victor Kumar as club vice-president.

In State 4 Baxter recently confirmed the re-appointments of George Hughes as head coach and Robert Mathieson as his assistant.

The duo recently had to break large numbers at training into two squads and that’s a pre-season first during their tenure there.

In State 5 news Al Baldwin has been appointed as seniors assistant to Chris Sanderson at Mount Martha while Mark Larner, who played for the ressies last season, is taking on the reserves coaching role.

Throughout the application and interview process FV is understood to have consistently praised Heart for the quality of its application and the club was already advertising for coaches and players.

According to Heart president Anthony Matthews the reasons given for the unexpected outcome were his club’s lack of an established senior side, the gap between its oldest junior group (under-13) and senior football and a lack of women’s and girls’ programs.

In other news FV released its competitions calendar last week and the first round of NPL2 and State League matches for 2022 will be held on the third week of March.

The first preliminary round of the 2022 FFA Cup will be held on the second week of February.