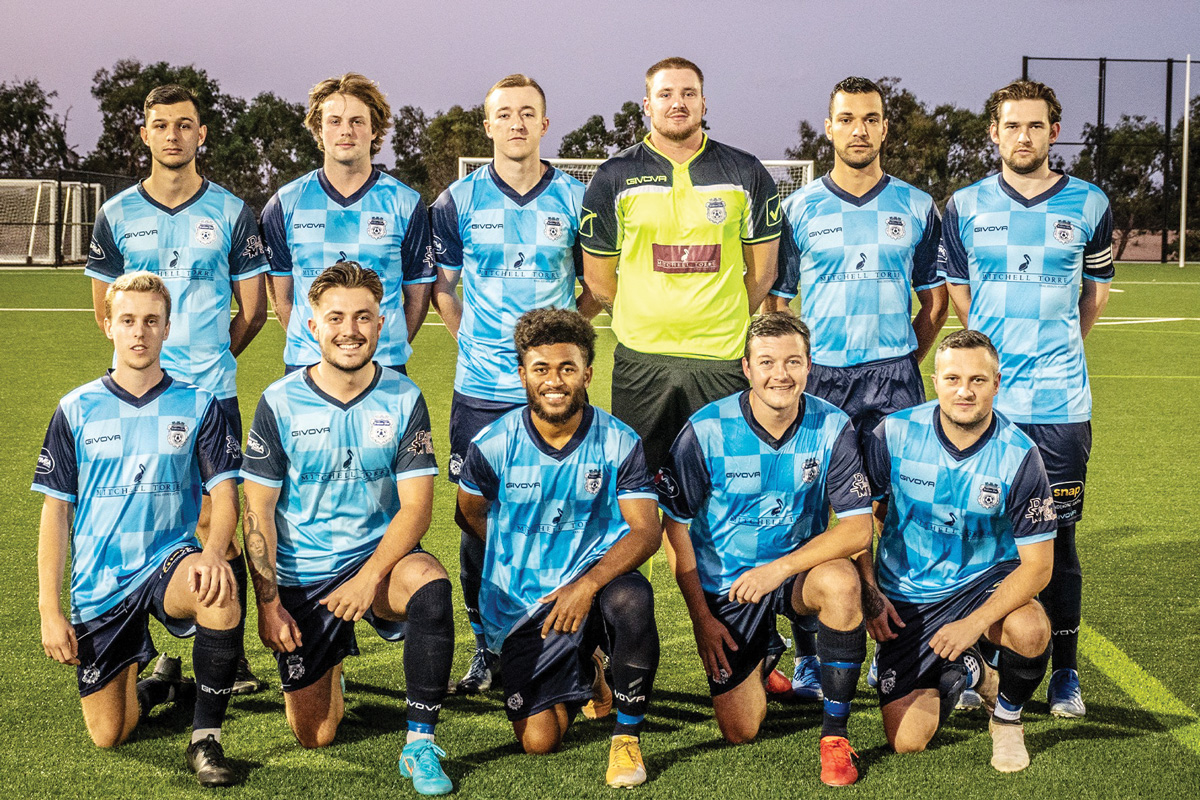 FRANKSTON Pines’ title tilt got off to a flyer last Friday night when it smashed visitor Brighton 5-0 at Carrum Downs Recreation Reserve.

Pines made no secret of its State 3 ambitions during the off-season and although it’s just one game in it has reclaimed the ladder position it had cemented before last season’s shutdown.

A Liam Baxter hat-trick underpinned this result as the visitors couldn’t contain the experienced Scottish striker and ex-NPL hit man.

Baxter put Pines ahead in the 12th minute when he finished a Tom Hawkins’ cutback from the right and three minutes later Brighton had a mountain to climb when Joe O’Connor was at the back post as Brighton failed to clear from a corner.

A Shoan Kondhalkar own goal and Baxter’s brace in the second half completed a dominant display by the home side.

In State 1 action Oliver Walker-Peel reports that Mornington got its 2022 league campaign under way with a hard-fought 3-1 win against Richmond at Dallas Brooks Park on Saturday.

The sides were locked at 0-0 at the break but just after the restart Seagulls’ captain Wayne Gordon fired home from close range following a cleverly worked free-kick routine.

The visitors restored parity not long after when Hamied Zamari’s goal-bound free-kick from 25 metres crept in at Taylor Davidson’s near post.

Seagulls’ substitute and academy graduate Tom Wood put the hosts back in front when he tapped home from inside the six-yard box for his first league goal.

A great through ball in behind the Richmond defence set the Englishman free before he cleverly rounded Richmond shot-shopper Chris Kaev then slid the ball into an empty net.

In NPL2 Langwarrin christened the floodlights on the main pitch at Lawton Park on Saturday evening but Werribee City spoiled the party with a late winner.

It was all about Rogan’s reaction and Fraser’s fumble.

A goalless first half was followed by an explosive incident in the 58th minute.

Tom Youngs was felled by a lunging tackle from behind by Werribee’s Nemanja Spasojevic.

Recently appointed Langy captain Rogan McGeorge wanted a piece of the action running up to Spasojevic and shoving him to the ground.

Referee Luke Camilleri booked both players and McGeorge was sent off as he was already on a yellow card.

The 10 men looked likely to escape with a point until a long free-kick was floated into the Langy area.

Fraser Maclaren had come off his line to effect what should have been a simple take but he spilled the ball and Spasojevic pounced striking it home.

It was a dismal performance from the visitors who had no answer to hat-trick hero Daniel Aye and Daniel Walsh’s second half penalty after Mitch Blake was brought down inside the area was small consolation.

It was a different story at Centenary Park on Sunday as Peninsula Strikers fought back from a 1-0 half-time deficit to beat North Caulfield 2-1.

Joel Parasol had given the visitors a 17th minute lead but Kiwi striker Riley Anderton turned the contest on its head after the interval.

An errant Ahmed Tabbara pass had led to North Caulfield’s goal but Tabbara’s pass led to Anderton’s equaliser in the 52nd minute.

Anderton went past a defender then slotted the ball in at the near post.

His winner came in the 73rd minute when he was at the back post to head home from a Huss Chehimi corner.

The big news in State 4 was the switch of veteran goalscoring machine Dave Greening from Somerville Eagles to Baxter 48 hours before Saturday’s 1-1 home draw with Endeavour United.

Greening had missed pre-season so he started on the bench but when Lawrence Komba added to Baxter’s mounting injury list the “Green Machine” came on in the 23rd minute.

Baxter midfielder Charlie O’Connell had attracted the attention of Endeavour United early in the contest and when he was brought down inside the area in the 38th minute up stepped Greening and Baxter led 1-0.

The opposition’s physical approach to dealing with O’Connell continued in the second half and came to a head in the 53rd minute.

As was Baxter’s Daniel Fernandes who had reacted angrily to the incident and after the match referee Aurel Ioana confirmed that both had been dismissed for violent conduct.

O’Connell was replaced by Luke Grant in the 65th minute but by now Endeavour was starting to gain control and Peter Yinka-Kehinde was running riot up front.

His movement and ability to turn defenders was now an ever-present threat and it was no surprise when he levelled in the 78th minute when he got free on the right of the area and struck a well-placed shot past Baxter keeper James Foster.

Yinka-Kehinde proceeded to torment Baxter but poor finishing enabled the home side to cling on to a point.

Somerville Eagles won 2-1 away against Lyndale United on Saturday.

The visitors led after seven minutes when Tom Simmons finished well from inside the area but a Connor Guyett own goal saw the sides go to the break at 1-1.

Somerville coach Lee Barber switched from a 4-3-3 to a 4-4-2 formation for the second half but despite creating more chances the visitors had to wait until the 78th minute for supersub Guil Ribeiro to slot home the winner following a pinpoint cross from the right.

Chelsea was due to play Keysborough away on Sunday night as we went to press.

In State 5 Aspendale Stingrays started the season with a fine away win while Mount Martha lost 4-3 away to South East United last weekend.

Both of Aspendale’s regular keepers were out of action so reserves outfield player Jordy Athanassiou stepped in to the breach keeping a clean sheet in both the reserves and seniors.

A superb strike by Taylan Yildirim put Aspendale ahead in the first half and Ben Garside scored in the second period.

Mount Martha went its season opener minus seven first teamers due to injury and illness.

Mitch Hawkins scored twice in the first 11 minutes but it was 2-2 at half-time and although Hawkins won the penalty that enabled Connor Mooney to convert from the spot in the second half the home side scored twice to secure the points.

Here are this weekend’s round 2 league fixtures: