Baxter back with a bang 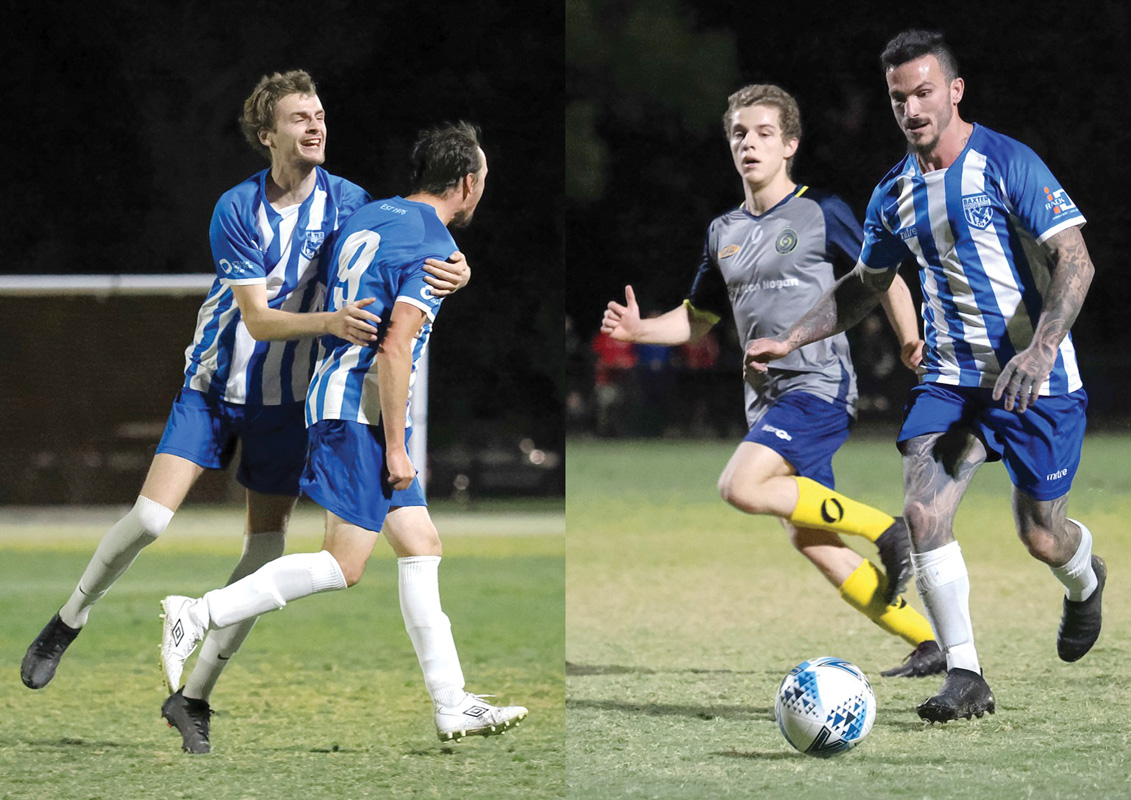 The visitors got off to the perfect start after 65 seconds with Lachie McMinimee finishing off an Izaak Barr cross from inside the six yard box.

The second goal came after 19 minutes and what a goal it was.

A magnificent Charlie O’Connell through ball sent Robbie O’Toole clear and he calmly rounded Hurricanes keeper Jimmy Zafiriou then stroked the ball into an empty net.

Eight minutes into the second half any hope of a home team comeback ended when Greening received the ball on the left then twisted and turned his defender inside out before lashing a shot from outside the box that was too hot for Zafiriou to deal with.

The onslaught continued and in the 65th minute Greening turned provider as his cross was turned into the net by substitute Lewis Gibson.

The exclamation mark on Baxter’s first win of the season came three minutes later when Greening beat the offside line and slotted the ball past a helpless Zafiriou.

In NPL2 Langwarrin’s stuttering start to a season of high expectation continued on Saturday with a 3-1 loss to visitors Moreland City.

Moreland keeper Alexander Kondoleon gifted the opener to Langy striker Mawien Nielo in the 2nd minute but two first-half headers from Fletcher Fulton and a breakaway goal from substitute Peter Constantinou in the second half sealed the home team’s fate.

If Langy is to stage a revival it will do so without off-season midfield recruit Jay Davies who is believed to have signed for Sydenham Park last week.

On a positive note spectators who arrived at Lawton Park early were treated to an attacking clinic as the under-21s overwhelmed their opponent 11-0.

Young striker Allen Dzemedzic will remember this match for a while after his hat-trick and being involved in a number of slick interpassing moves.

In State 1 Mornington fought back from a two-goal deficit to draw 2-2 with Fitzroy City at Kevin Bartlett Reserve on Saturday.

Fitzroy led 1-0 at half-time and went further ahead in the 49th minute following a goalkeeping blunder from Josh Gates.

A Matt Harrington header from a John Maclean free-kick made it 2-1 in the 63rd minute and the equaliser came from a Josh Heaton header following a corner with 10 minutes to go.

In State 2 Peninsula Strikers retained a perfect record with a convincing 4-0 away win over struggling Monbulk Rangers who were forced to forfeit the reserves fixture.

Monbulk keeper Beau Newman couldn’t deal with Huss Chehimi’s long floated ball from the left in the 33rd minute for the opener and the struggling home side was dealt a bodyblow four minutes from the interval with a straight red for Gus Clark in what looked like an extremely harsh decision.

The 10 men went further behind in the 48th minute with a Cooper Andrews tap-in following good work and a cross from the right by Abe Kuol.

An Ahmad Tabbara overlap on the left and cutback was met first time by Jai Power to make it 3-0 after 57 minutes.

In the final minute of normal time Monbulk’s Liam Jones didn’t take kindly to being brushed aside by Strikers’ substitute Mohsen Chehimi and retaliated with a rash challenge inside the area.

Kuol converted from the spot.

Club historian Laurence Hall believes it is the first time in Strikers’ history that the club has recorded four consecutive clean sheets and players and coaches celebrated the occasion in the dressing room after the match with a song dedicated to the goalkeepers.

Last Thursday night Skye travelled to Esther Park to take on second-placed Mooroolbark and left with a point following a 1-1 draw.

It was a physical affair from the get-go but it took until five minutes into the second half for Mooroolbark’s Liam Seaye to break the deadlock with a shot from outside the area.

Skye’s pressure paid off in the 80th minute when the head of big Alex Van Heerwarden met Mark O’Connor’s free kick for the leveller despite the goalline effort of home team defender Daniel Higgins.

A piece of Dylan Waugh ingenuity opened the scoring in the 56th minute when his first time volley from outside the area lobbed over the Whitehorse keeper.

In the 66th minute Jordan Avraham’s free kick to the far post was headed back across goal for an Aaran Currie tap-in.

Noble Park ended the match with nine men after Adrian Mota and goalkeeper Zulkifli Zulkifli were sent off in the second half.

Somerville led in the 15th minute thanks to a low shot from the edge of the area from Chris Thomas but was 3-1 down with six minutes of normal time left.

That was the cue for supersub Josh Simmons to make his mark as he pounced on goalmouth scrambles in the 84th and 90th minutes and slotted the ball home both times.

Chelsea went 1-0 down in the 33rd minute but equalised a minute later when Chris Scott unleashed a superb drive from outside the area.

Dandenong South hit the front again in the 50th minute and the home side had to rely on the late, late show from Piers Brelsford who reacted quickest to a corner and headed home at the near post.

In State 5 Mount Martha’s first win of the season was powered by an Ethan Sanderson hat-trick and his assist for Mitch Hawkins’ goal.

They now face another challenge this Friday when they travel to Olympic Park to take on what could be a much-changed Rosebud line-up.

Here are this weekend’s round 6 games: