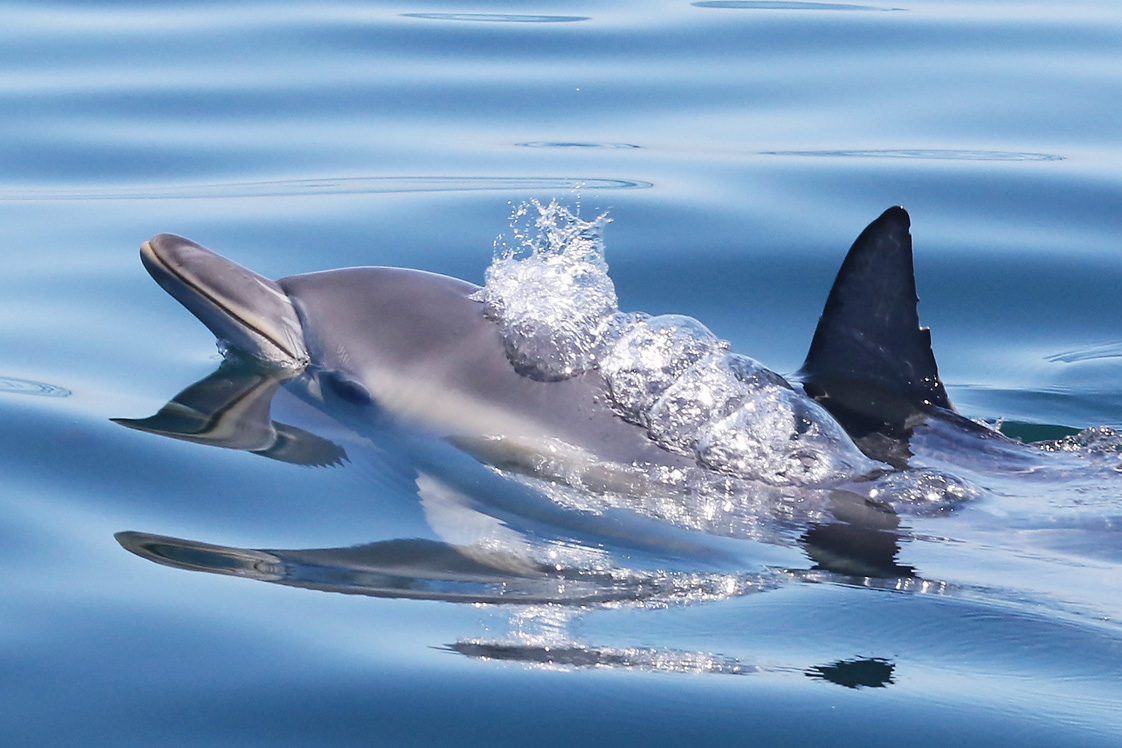 “WHAT are you lot up to? Have you spotted anything yet?”

Wearing bright orange vests, chunky binoculars and big grins (or looks of intense concentration), the Dolphin Research Institute (DRI) interns are easy to spot. I happen to be one of them.

Every week we spend a few hours down by the beach, straining our eyes to see dolphins. And every week, regardless of what we spot in the water, we hear at least one dolphin story.

“They always come when it’s calm; I think the rough water stresses them out.”

“I was on a paddleboard once and a whole pod came up and started leaping around me.”

“Seeing dolphins was always the highlight of my Port Phillip holiday.”

You’d be hard pressed to find someone from the Mornington Peninsula who doesn’t have a dolphin story to tell.

Here is another one, the story of Lucky the dolphin, and its proof that science works.

The DRI was founded in the late 1980s. Its aims were simple – to learn more about local dolphin populations, educate and engage the community and protect south-east Victoria’s marine ecosystems.

Despite the number of people who see dolphins while swimming or walking along the beach, it’s harder than you might think to turn those sightings into tangible data that can be analysed and used for conservation work.

Yet that is exactly what the DRI has done. Over 31 years, it has collected more than 130,000 photographic identification images. Individual dolphins are differentiated by markings on their dorsal fin (on top of their back), so photo-IDs track them in a non-invasive way.

Through this system, we were able to learn about our local dolphins – how many there were, how healthy they were, how they interacted with one another.

Our story begins with a dolphin called Bud (short for ‘Banged Up Dolphin’ – delightful, right?). Dolphins can be very aggressive and wound each other, but luckily those around Port Phillip seem to have great immune systems resulting in good recovery rates.

Bud is a short-beaked common dolphin, one of two types found in the bay. Initially, we thought there were only bottlenose dolphins in the area, as other types don’t tend to live in such shallow waters. Yet to the excitement of DRI researchers, a small pod of common dolphins was discovered in 2005.

This small population of common dolphins grew and grew, and now there are more than 80 individuals catalogued.

But back to Bud, because she has some very exciting news – she recently became a mother. Her child, Lucky, can also be identified by its damaged dorsal fin – it’s a tough life being a dolphin.

Seeing a mother-baby pair is incredibly special. But DRI researcher David Donnelly suspected there was more to the story.

He spent hours and hours sifting through fin-ID photos, tracing Bud back to 2013, when she was a newborn.

And he found it, a photo of Bud with her mum, Esther, one of the first common dolphins to arrive in Port Phillip. This is the first confirmation of the third generation of these dolphins in the bay, as proven by science.

On top of this, during April we discovered Lucky has a cousin – another member of the third generation.

These findings have demonstrated just how special Port Phillip is.

In Western Australia, dolphins are being attacked by sharks and viruses, and investigations are underway to determine why dolphins are dying in South Australia. Even dolphins in Gippsland are struggling with skin ulcers that don’t heal.

Our remarkable common dolphins and their Port Phillip home is an amazing success story that is unusual, if not a one-off on a global scale.

Without dedicated volunteers and passionate researchers, we wouldn’t have the same understanding of our local dolphins and how to best protect them.

To help protect the Port Phillip dolphins, visit dolphinresearch.org.au where you or your workplace can “adopt a dolphin”, support our research, education and leadership programs.

First published in the Chelsea Mordialloc Mentone News – 25 May 2022