Four for Brelsford in 7-0 romp 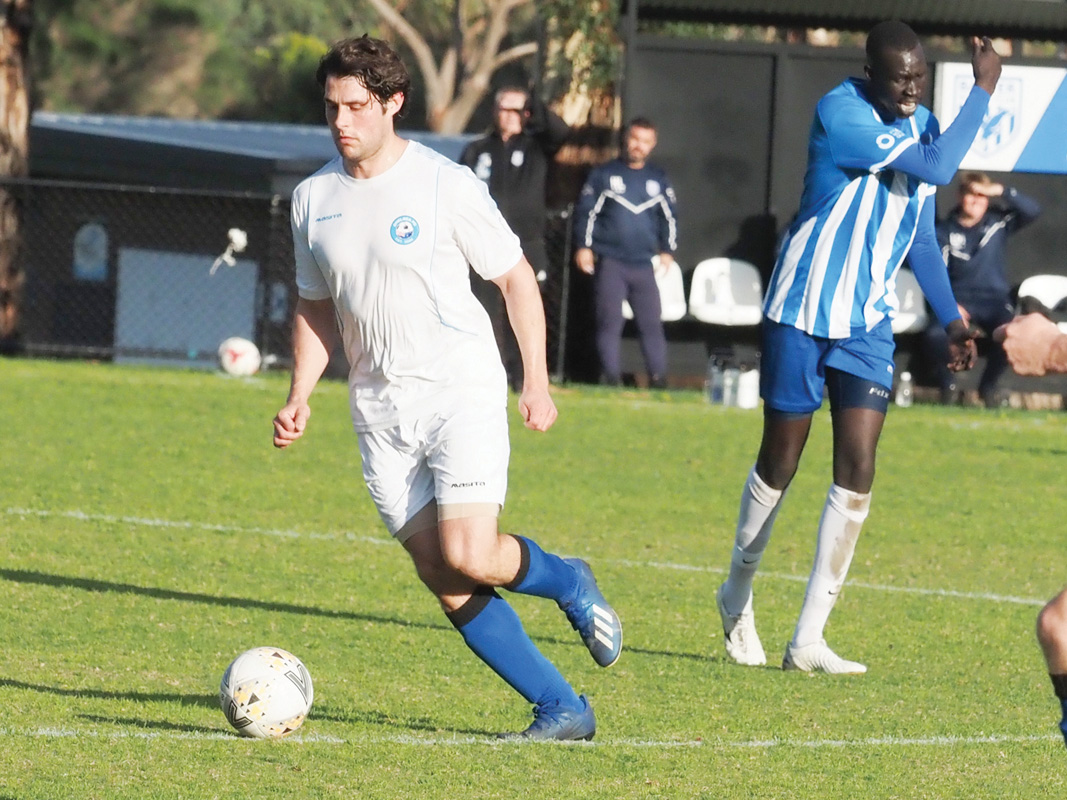 CHELSEA striker Piers Brelsford was in sparkling form last Friday night as the local side stayed in the State 4 promotion race with a 7-0 demolition of Noble Park.

His four-goal haul catapulted him up the league Golden Boot chart into second spot behind Sandown Lions gun Duol Kuei.

The goal tsunami that engulfed Noble Park started in the sixth minute when Daniel Vella was put through and squared to Brelsford for a tap-in.

Connor Scott made it 2-0 in the 34th minute with a long-range shot and Noble Park had no answer to the five-goal onslaught that ensued after the interval.

A minute into the second half Brelsford scored at the second attempt eventually chesting the ball in following a corner.

He completed his hat-trick four minutes later with a low shot inside the far post and Vella got in on the act in the 66th minute after being put through by Mitch Hammond.

Vella made it 6-0 in the 75th minute and the best was saved for last – an overhead kick from Brelsford in the 76th minute that sailed over the head of Noble Park keeper Allezar Brookes.

“It was great to see the self-belief in the side after the previous week’s disappointing home defeat,” Chelsea gaffer Carlo Melino said.

“This will help us go far in this league and hopefully contend for promotion come season’s end.”

The visitors were behind the eight-ball early when defender Jaiden Madafferi was sent off in the 21st minute after referee Marc Tito judged him to have handled and to have denied a scoring opportunity.

Manningham went in front a minute before the interval when a cross to the back post was headed home by Salvatore Accardo.

Langwarrin was creating chances but failing to convert and just when it looked like the 10 men were not going to be rewarded for their efforts second half substitute Marcus Di Meo pounced on a blocked shot to fire home the equaliser in the 93rd minute.

Langy is currently eighth in the league but just one point separates it from three of the four sides below it and this weekend it faces ninth-placed Werribee at Galvin Park Reserve in a contest vital to its immediate aim of pushing clear of the relegation zone.

In State 1 Mornington had a miserable day out losing 3-0 at home to Beaumaris last Saturday.

Jonathan Creamer gave the visitors a first-half lead with a left-foot volley that gave Mornington keeper Taylor Davidson no chance.

Just before half-time Beaumaris was reduced to 10 men when a second caution for dissent forced visitors’ captain Jesse Kewley-Graham to exit the contest.

Mornington had started without suspended Josh Heaton and a host of injured players so when Jamie Davidson was replaced by Josh Hine for tactical reasons and the side was reshuffled in the second half the home team’s aerial threat diminished.

That’s what made the number of poor high balls into Mornington’s attacking third a source of great frustration for home fans.

This was easy pickings for Beaumaris central defender Sam Mack and his keeper, Jarrod Hill, was rarely troubled.

Two goals in two minutes late in the match, one when Ryan Brown turned Andy Goff inside the area and finished from close range and the other from the spot from Gideon Sweet after Hamraz Zenoozi was felled, rounded off the scoreline.

Mornington featured former Eastern Lions captain Ziggy Razuki who signed last week and is understood to be looking at two other possible signings.

In State 2 Peninsula Strikers fell to a shock 4-1 loss to Doncaster Rovers at Ballam Park on Saturday night.

Jai Power scored for Strikers who have finished the first-half of the season with a one-point lead in the race for the championship having only lost two games.

In State 3 Frankston Pines returned to the top of the table with an impressive 5-0 home win on Friday night against Ashburton.

Baxter’s opener started with a long free-kick from keeper Thomas Hull which Dylan Waugh headed down towards the near post and Baxter finished from close range.

Pines enjoyed a 2-0 half-time lead after Aaran Currie’s low corner to the near post was superbly struck first time on the turn by Joe O’Connor.

The low corner routine worked again in the 51st minute albeit that Ryan Ratcliffe took two attempts before beating Ashburton keeper Michael Savoulidis at his near post.

The goal of the match and one of the goals of the season came in the 70th minute and it involved a clever exchange between Thomas Dunn and Jordan “Caka” Avraham with the latter cheekily dinking the ball over advancing Savoulidis to make it 4-0.

Baxter completed the rout from the spot in the 77th minute.

Neither team could break the deadlock in the first half but  in the 63rd minute Hurricanes central midfielder was sent off after a clash with Ryan Maokhamphiou.

Somerville continued to press hard and thought it had been rewarded after a Conor McFall free-kick smashed off the bottom of the crossbar and looked to have crossed the line but the referee thought otherwise.

Baxter had to settle for a point at home when it drew 2-2 with Keysborough United.

An Amir Ahmetanovic first-half brace had the home side 2-1 down at half-time.

Lachie McMinimee opened the scoring after 18 minutes but Baxter had to rely on a Dave Greening strike in the 70th minute to eventually draw level.

In State 5 there was no joy for local clubs as Rosebud was trounced 6-0 at home on Saturday night by title favourite Mentone while Mount Martha lost 4-0 away to Pakenham United earlier that day.

Mount Martha failed to convert a series of great scoring opportunities while the home side had five clear chances and scored from four of them.