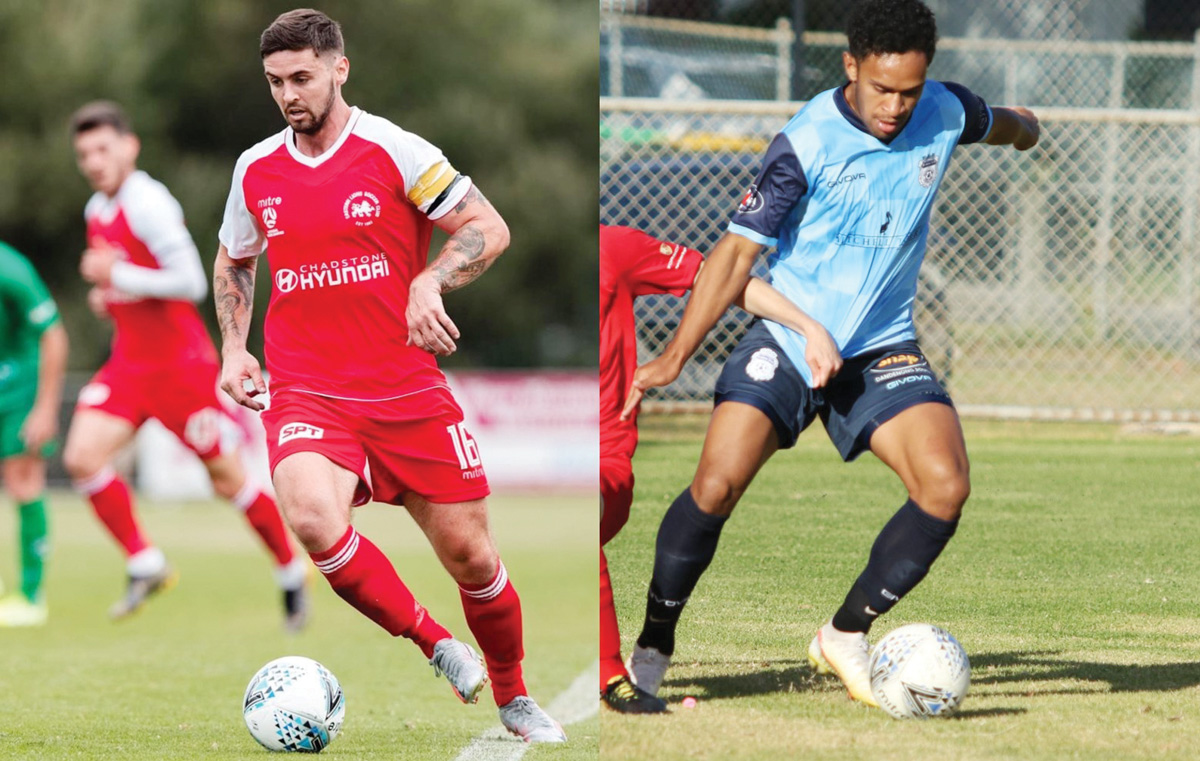 Both are midfielders and 27-year-old Kenny has extensive NPL experience while Baledrokadroka is a full Fijian international and has captained his country’s under-23 side.

Kenny was a contracted player at Eastern Lions and has had to stand out of football for 30 days as he reverts to amateur status with the Seagulls.

He last played for Eastern Lions in late May.

“At the moment we don’t have enough competition in the squad (due to injuries) and we’ve had to pick some players when they’re not really in form,” Mornington gaffer Adam Jamieson said.

“Shaun has a lot of experience at a high level and we’re confident he’ll be a really good signing for us.”

In NPL2 Langwarrin also featured a new signing in Brad Chick who scored in a 3-0 away win over Werribee City last weekend.

The 21-year-old defender was signed from Oakleigh Cannons and Langy is considering other possible arrivals.

Over the past fortnight Liam Wolstenholme has joined Doveton and Slaven Vranesevic has left due to family commitments.

Against Werribee it took just nine minutes for the visitors to hit the front when Kieran Dover was put through and struck a low shot from just inside the area into the far corner.

Chick struck in first-half injury time with a fierce strike from 12 metres that gave Werribee keeper Marc O’Rourke no chance.

Two minutes into the second half a ball from the left found Langy striker Ryan Paczkowski and he hammered a right-foot volley past O’Rourke to make it 3-0.

Langy took the opportunity to give some of its younger players game time over the remainder of the match.

Kameel Khan made his senior debut as one of four 18-year-olds brought off the bench.

In State 1 Mornington got back on track after the previous week’s home loss with a 4-0 demolition of Richmond at the Serbian Sports Centre on Saturday.

A Danny Brooks free kick in the 14th minute opened the scoring and Josh Hine gave the Seagulls a two-goal cushion in the 30th minute when he finished off the excellent work of Campbell Steedman down the right with a tap-in at the back post.

Steedman’s superb left-foot volley made it 3-0 after 70 minutes and Hine grabbed a double in the final minute of normal time.

In State 2 Skye United had to settle for a 1-1 draw at home with fellow midtable side Knox City on Saturday.

The visitors opened the scoring against the run of play in the 15th minute when Ali Ulum turned the ball into his own net after Knox striker Daniel Aye had turned the home side defence inside out.

The lead should have been doubled but a combination of poor finishing and a great save from Jonathan Crook kept the hosts in it.

Skye levelled on the half-hour mark when Ulum’s corner found Brett Heskins at the back post and the big man volleyed home the equaliser.

Chances were few and far between in the second half.

In State 3 Frankston Pines retained top spot with a hard-fought 1-0 away win over Brighton last Saturday.

Brighton keeper Carl Darling made a great save from a Christian Malgioglio header before the breakthrough came in the 27th minute when Brighton failed to deal with a Jordan Avraham free-kick and Aaran Currie was quickest to react toe-poking the ball into the top corner.

Pines keeper Tom Hull made a fine stop from a one-on-one with Brighton striker Dave Nicholas late in the half.

With the wind at its back Brighton bombarded Pines in the second period.

Pines striker Joe O’Connor was sent off in the 81st minute after receiving a second caution and Nicholas blew a great chance to level in the dying moments when he skied his attempt from close range.

“All in all it was a decent three points against a well organised opposition that have beaten Bayside and Elwood already this season,” Pines boss Kevin “Squizzy” Taylor said.

In State 4 Chelsea took care of business on Friday night with a 4-0 home win over Keysborough.

Chelsea went into the contest without captain Luke D’Alessandro and vice-captains Connor Scott and Sam Dunn but leading scorer Piers Brelsford put the home side ahead in the 12th minute pouncing on a defensive error before striking a low shot into the bottom corner.

A long-range Vinnie Van Dyk effort in the 58th minute made it 2-0 then Brelsford scored from a ridiculous angle placing the ball in the top right corner in the 64th minute and effectively ending the contest.

In the 84th minute Max Timuska-Carr pounced on a misplaced pass in midfield and charged forward before finishing over advancing Keysborough keeper Max Krista.

Somerville Eagles had their biggest win of the season when they thumped Lyndale United 5-0 at Tyabb Central Reserve on Saturday.

Somerville led 3-0 at half-time thanks to a Tom Simmons brace and a Ronnie Krishnan goal.

Simmons opened the scoring when a quickly taken Conor McFall free-kick sent the youngster clear for an easy finish and a few minutes later he was set up by Josh Simmons before skipping clear of both central defenders and slotting past Lyndale keeper Michael Napolitano.

Just before half-time a hard driven cross from Adrian Pace was flicked home at the near post by Krishnan and the home side was cruising.

A McFall free-kick in the second half was brought down and tapped past Napolitano to make it 4-0 and Simmons completed his hat-trick after being put through by McFall.

It was a different story at Baxter which went down 7-0 away to promotion candidate Endeavour United last weekend.

Mount Martha was 2-0 down at half-time but a penalty converted by Ethan Anderson in the 53rd minute and a long-range effort from Howie Anderson in the 67th minute levelled the scores.

South East United’s winner came seven minutes later when a long ball over the top was blocked by advancing Mount Martha keeper Derren Elliott only for Salim Sensedinovski to finish superbly from the rebound.

Rosebud also fought back from a 2-0 half-time deficit thanks to goals from Blake Hicks and Rieley Gill.

In the 49th minute Hicks’ free kick was blocked but he volleyed home the rebound and he also had a hand in the equaliser in the 79th minute.

His free kick was saved by Pakenham keeper Isaac McGill who then parried Cory Osorio’s follow-up shot but Gill was there to tap the ball in and grab a point.