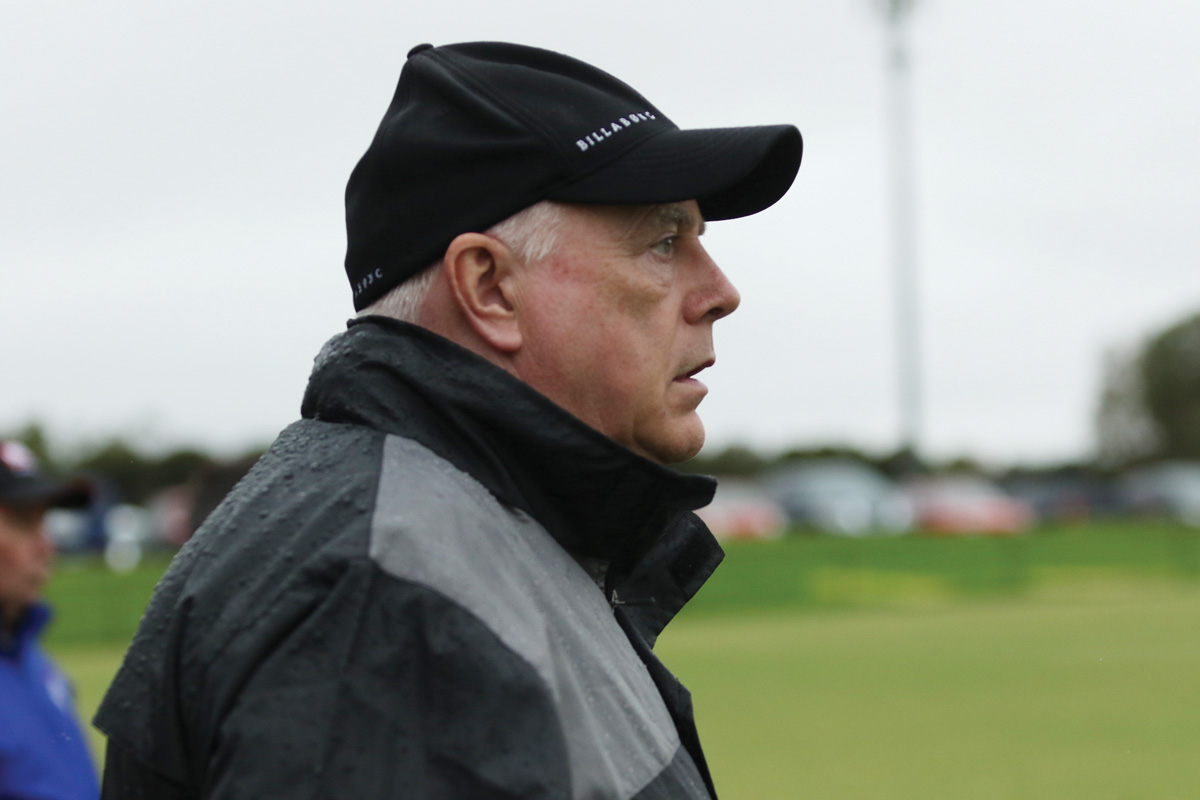 BAXTER will have a new senior coach next season after George Hughes decided to step down at season’s end.

The club made the announcement last week and acknowledged the outstanding contribution 63-year-old Hughes has made since his appointment in October 2018.

“He stepped into our club at a dark time and has led this club with sophistication, experience and honour,” the club statement said.

“We would simply not have survived our darkest time if it wasn’t for George.

“He instilled culture and pride back into the blue and white jersey over his four seasons and without him, we wouldn’t be in the position we now find ourselves.”

“The Strikers championship was a definite highlight for a host of different reasons but coaching the Vic country boys (U15s) to a win over Vic metro at the championships in Sydney was pretty special for me,” Hughes said.

Baxter’s first competitive game under Hughes was in the 2019 FFA Cup.

On the Tuesday before that February fixture Hughes and assistant Robert Mathieson had just eight senior players despite contacting over 50 players during the pre-season in a futile attempt to sign them.

Four days later they were able to put 14 names on the Baxter teamsheet and those players covered themselves in glory by emerging 3-2 victors over Altona North after a marathon 120 minutes of absorbing cup-tie football.

“While it’s been a hard struggle at times and we’ve lost a lot of games I think we still play good football and there have been a lot of times when we’ve actually outplayed teams and still got beat.

“I think the club has a lot to look forward to, I really do,” Hughes said.

In NPL2 there was a dramatic end to Langwarrin’s clash with Pascoe Vale at Lawton Park on Saturday.

Pascoe Vale bossed the ball for much of the contest and when substitute Lucas Portelli’s 20-minute stint ended with a straight red in the 66th minute it seemed inevitable that the home side’s defensive wall would be breached.

Fraser Maclaren and his teammates had other ideas.

Maclaren kept Langy in the contest with a low left-handed reaction save while outfield players somehow found renewed energy levels.

Sammy Orritt’s workrate in the last half-hour was exceptional as time and again he charged down the right and crossed balls into the Pascoe Vale box and it was this avenue to goal that proved decisive.

When a draw looked inevitable his far post cross in the 95th minute was headed home by substitute Tom Youngs and the Gus Macleod Stand erupted.

In State 1 Mornington’s home fixture against Warragul United was called off due to the state of the main pitch at Dallas Brooks Park.

It’s understood that the Shire Council allowed schools to use the facility on Tuesday for a lightning premiership.

Mornington president Nick Waite claimed that “between 30 and 40” games were played that day and the club was forced to relocate Sunday’s home fixtures against Goulburn Valley Suns in the junior boys NPL to the State Football Centre in Thornbury.

Mornington bore the brunt of costs involved in the venue switch and as we went to press the club’s attempts to elicit a response from council to discuss compensation had failed.

In State 2 Skye United is up in arms at Frankston council’s decision last Thursday to mow the waterlogged pitch at Skye Recreation Reserve leaving it scarred and furrowed less than 48 hours prior to its home match on Saturday.

Unfortunately for Skye the game went ahead and visitors Heatherton United ran out convincing 3-1 winners.

Skye had gone into the contest without senior keeper Jonathan Crook who was on holidays thus ending a run of 114 games straight for the local outfit.

The home side found Heatherton a handful from the outset.

Skye absorbed most of the pressure in the first 20 minutes and scored against the run of play when James George poked the ball home after a goalmouth scramble.

However it was all one-way traffic after that as an Armin Kerla hat-trick ensured the away side claimed all three points.

Peninsula Strikers lost 2-1 away to Old Scotch and lost top spot in State 2.

Strikers have been top dog in the league since round 4 but Saturday’s round 13 loss pushes them down to second behind Collingwood City on goal difference.

Strikers opened the scoring against Old Scotch in the 9th minute thanks to a Huss Chehimi volley from inside the box.

Old Scotch hit back in the 31st minute after a deflected cross from the right fell at the feet of Josh Allen who placed it past Strikers keeper Ben Caballero from close range.

Hamish McRae won it for the home side with a well-struck low shot from outside the box in the 50th minute.

In State 3 Frankston Pines remains on top of the league after winning 3-0 away to South Yarra last weekend.

Pines midfielder Jordan “Caka” Avraham is a gifted playmaker and it was a piece of “Caka” magic that broke the deadlock in spectacular fashion in the 38th minute.

He gained possession just inside his defensive half and drove forward skinning four opponents in all before slamming an unstoppable shot past Slowey into the top corner from just inside the box.

South Yarra only partly cleared from a corner allowing Keegan Grealy to cross to the back post where Taylor slid in and finished from close range.

The Fijian connection combined for Pines’ third goal in the 59th minute.

Avraham broke down the right, squared the ball to Savenaca Baledrokadroka who laid it off to Tommy Dunn and his left foot finish from the edge of the area completed the scoreline.

In State 4 Chelsea’s promotion push struck a major speed hump when it lost 5-1 at home to Endeavour United on Friday.

Not for the first time this season Endeavour forward Peter Yinka-Kehinde was a major thorn in the side of a local outfit and he notched a second-half hat-trick.

Somerville Eagles fared little better on Saturday losing 3-1 at home to Sandown Lions in a contest played in horrible weather conditions throughout.

Somerville’s goal came from Zach Karolidis who had a tap-in after an error from Sandown keeper Sammy Salah.

In State 5 Endeavour Hills has withdrawn from competition and all previous results this season involving Endeavour have been scrapped.

This follows a series of postponements during last year’s abbreviated season as the club struggled to field a senior team.

Football Victoria decided during the off-season to allow the club to retain its State League status.

There was much better news for Rosebud though as a late winner from Rieley Gill gave it a 3-2 away win over South East United on Saturday.

Rosebud gave up a two-goal lead but in the 80th minute Gill caught South East keeper Sami Abou Zolf off his line and lobbed the ball over him to seal a great win for the local side.

Bottom side Mount Martha was smashed 6-1 by Barton United at Civic Reserve on Saturday.

The home side was already 6-0 down when Ethan Sanderson scored from the penalty spot in the 75th minute.