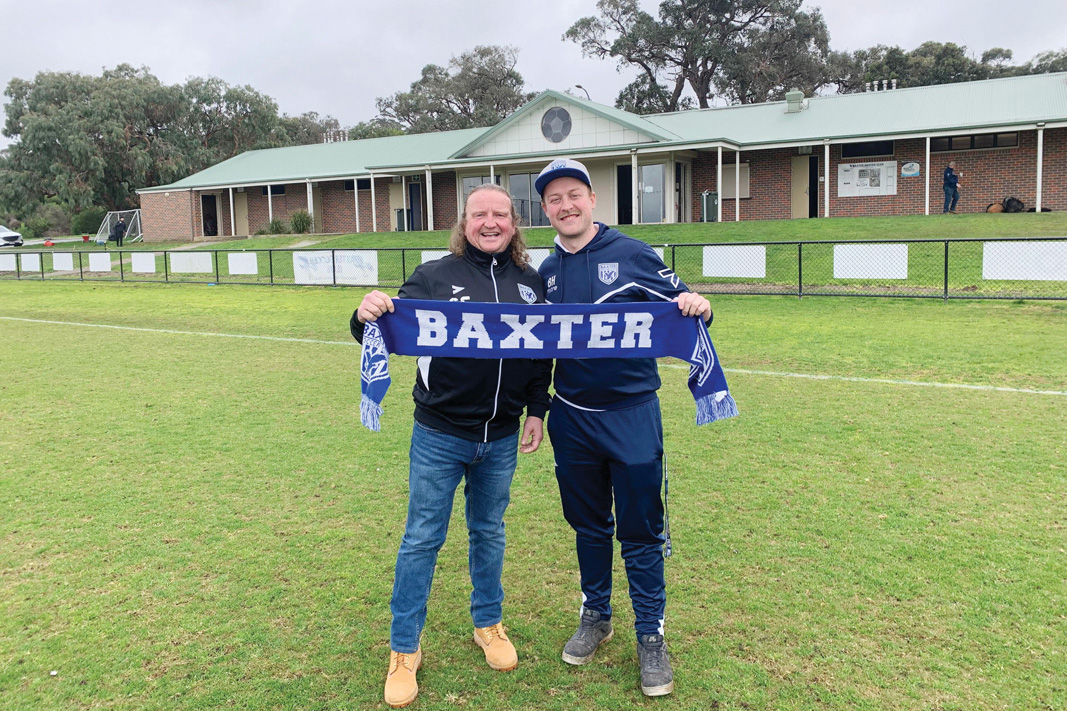 BAXTER announced on Monday (27 June) that Stephen Fisher would take over from George Hughes as senior coach for the 2023 season.

Fisher will be in charge of a senior squad on a full-time basis for the first time but has an extensive playing and coaching background.

The 55-year-old played with Chelsea, Frankston Pines, Frankston City and Botany Park and his coaching career kicked off at Lawton Park when he coached his son Dylan in Langwarrin’s juniors.

“Gus Macleod was instrumental in getting me to do coaching courses and he recommended me to Football Victoria to get involved in coach education,” Fisher said.

With the advent of the NPL Fisher joined Springvale White Eagles and later Dandenong City before becoming Langwarrin’s first NPL technical director in 2018.

He has also coached Doveton’s reserves in NPL3 so moving to Baxter Park and dropping to State 4 level was unexpected.

“I’ve got a great affiliation with Baxter and have a lot of friends down there, people I’ve known for years,” he said.

“I’ve held some sessions down there and I know the playing group pretty well so I’m going into this role with my eyes wide open.

“I see this as a really good fit and I think this club has massive potential both on and off the pitch.”

Fisher’s player network is extensive and he already has some new signings firmly in his sights.

“The actual core of the playing group is good but we’ll also look at recruiting young players who might be disillusioned by lack of opportunity at NPL level and older players that can do a mentoring job and aren’t driven by how much money they can get each week.

“First and foremost though we’ve got to retain the players we’ve got because we’ve got some very good players and we need to ensure that they’re happy to stay onboard.”

Fisher is expected to speak to striker David Stirton “to see just how keen he is to play with his mates” and he’ll also speak to former Langy and Doveton youngster Brodie Jones.

There are others currently playing but he won’t name them “because that’s not fair to them or their clubs”.

“The fact that no-one gets paid at Baxter restricts who you can recruit but one thing I do know is that anyone that’s going to be there is playing for the shirt.”

The 38-year-old defender has played in the A-League and overseas and has had stints at multiple NPL outfits.

“We needed to fill a void at the back caused by injuries and Ramazan obviously is an experienced player who has played at a very good level,” Langy gaffer Scott Miller said.

“He’d been coming down and watching us for a few weeks and knew a lot of the players already so there was no problem fitting in with the group.”

Langwarrin also signed former junior Nathan Lynders last week from Dandenong Thunder as its goalkeeping stocks were severely depleted by the departures of Jake Richardson due to work commitments and Branton Kindler who is holidaying overseas.

A Mawien Nielo header in the 12th minute gave Langy the lead last weekend but a well-struck left-foot volley by Luke Pavlou from the edge of the area in the 61st minute completed the scoreline.

In State 1 Mornington got back on track with a 4-0 away win over Bentleigh United Cobras on Saturday.

The Seagulls took a 1-0 lead into the main break thanks to a Luke Goulding goal direct from a corner.

Two second-half goals from Josh Hine – with assists from Rhys Craigie and substitute Leandro Salazar – and an own goal from Bentleigh’s Mitchell Walsh made the trip to Victory Park well worthwhile.

In State 2 both Peninsula Strikers and Skye United lost 4-0 away from home last weekend to Knox City and Doncaster Rovers respectively.

Strikers remain in second spot with a five-point buffer over third-placed Old Scotch.

In State 3 Frankston Pines will return to its traditional headquarters at Monterey Reserve on Saturday 9 July.

The club will revert to a Saturday afternoon schedule when Bayside Argonauts arrive at the new multi-million dollar facility for the reserves clash at 1pm followed by the senior match at 3pm.

Last Friday night Pines said farewell to the synthetic pitch at Wedge Road, Carrum Downs, that has hosted its home fixtures since 2020.

A long-range strike from Sava Baledrokadroka from a tight angle on the right in the 8th minute proved decisive as Pines ran out a 1-0 victor over Noble Park United.

In State 4 Chelsea edged Somerville 2-1 in Friday night’s derby at Edithvale Recreation Reserve with both Chelsea goals coming in the opening 11 minutes of the second period following a first-half stalemate.

A minute into the second half Piers Brelsford and Vinnie Van Dyk combined for the former to strike a low shot into the bottom far corner.

Ten minutes Nathan Boccari was brought down inside the area and Brelsford converted the resultant penalty.

Somerville’s sole reply was the goal of the game.

In the 73rd minute Conor McFall played a one-two with Josh Simmons then hit a first-time strike from outside the area that smashed off the underside of the bar and went in.

On the morning of the match Baxter was hit with three call-offs due to illness – Nathan Yole, Dan Disseldorp and Ben Meiklem – but Nat Daher stunned the home side in the 14th minute dribbling past two opponents then slotting the ball past Dandy keeper Elvis Alimovski for an impressive opener.

The equaliser was equally impressive.

It came in the 23rd minute from a cracking long-range strike by Hakan Yildiz.

Isa Sula put the home side in front in the 56th minute but Baxter earned a penalty 10 minutes from time after a defender handled an Izaak Barr goal-bound shot and Daher converted from the spot.

In State 5 Rosebud lost 4-0 away to Casey Panthers and Mount Martha lost 3-0 away to Hampton Park United.