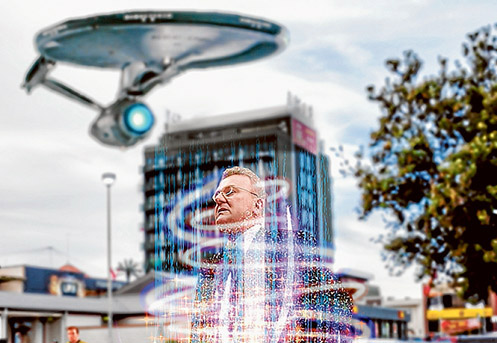 STARDATE 2015. These are the voyages of the Small Business Minister Bruce Billson.

His mission: to explore strange new business tax deductions, to seek out new cost savings and new Liberal Party policies, to boldly go where no man has gone before?

If this mission statement sounds a bit “out there” beyond the higher-profile stars of the Abbott cabinet, then allow The Times to explain.

The federal MP for Dunkley has been out and about spruiking the Abbott government’s second budget and its focus on small business has seen Mr Billson elevated to the command deck of government.

The irrepressible Minister for Small Business has been doing the media rounds to push small businesses as “the engine room of our economy”.

While spreading this message, Mr Billson has been keen to use a catchphrase of his own. He hopes to “energise enterprise”.

Fans of sci-fi TV show Star Trek may find the phrase to be familiar.

“Energise” is the word crew members of the starship Enterprise use to ask to be teleported – or “beamed up” in Star Trek parlance – aboard the ship from an alien planet’s surface.

The Dunkley MP’s use of the words “energise enterprise” or “energising enterprise” has multiplied since budget night early in May like an ever-expanding cluster of Tribbles.

A Google News search of the phrases coupled with Mr Billson’s name shows more than 50 direct hits although none, thankfully, on the starboard bow.

Despite his best efforts, including an address to the National Press Club in Canberra late last month about “energising enterprise”, Mr Billson’s continual push to see “Energise enterprise” enter the modern political lexicon has had somewhat less success than other Liberal slogans such as “Axe the tax”, “Stop the boats” and this year’s budget cry of “Have a go”.

When interviewing Mr Billson about the budget last month, The Times suggested the two-word “Energise enterprise” slogan did not fit the three one-syllable word formula so beloved of Prime Minister Tony Abbott.

Mr Billson admitted “Energise enterprise” is “quite the slogan” but “it’s my favourite one”.

“In all seriousness, the art of governing and political leadership is complicated and often at times there are a great deal of issues to be considered and work to be done,” he said.

“There’s not much point doing all of that work if you’re not in a position to communicate what it is that’s motivating you and what it is you’re trying to achieve.

“I’m realistic to know the majority of people don’t live and breathe these issues each day.”

He said many media commentators are critical of political communication but there is a need to connect with voters.

“I could run through the months and months and hundreds of pages of work that have gone into the small business and jobs package … but that’s beyond most people’s appetite for the topic.

“You do need to encapsulate at times quite a range of different thoughts and ideas into a method to get ideas across without boring people witless.”

The Times politely declined the offer to go through hundreds of pages of small business minutiae due to ever looming deadlines but appreciated the offer.

And with that, he was off, off to speak to another journalist on his ongoing mission to “energise enterprise”.

Or at least keep saying the two words in the hope it catches on with a wider political audience.